Cadillac knows it has gone astray, and now its trying to make it up to you with the beautifully styled and aggressively priced Cadillac SRX.

Groveling can be a wonderful thing, provided you are on the receiving end. I’m sure we’ve all had an errant friend or partner who went overboard to make up for the wrong they did, and who amongst us hasn’t taken advantage of that, even just a little bit?

Cadillac is in the middle of a major grovel. It was once the luxury car to which Americans aspired, but in less time than it took for Kim Kardashian to grow up, get famous, and shed two husbands, Cadillac has seen its brand appeal go from just above Armani to well beneath Amway. In order to win us back, Caddy is building appealing vehicles like the Cadillac SRX and selling them at bargain prices. And unlike your friends, Cadillac won’t be the least bit resentful if you take advantage of it by buying one.

The first Cadillac SRX, introduced in 2004, was an awkward wagon-SUV-crossover that looked like an Escalade suffering from severe dehydration. The big-wheeled beauty we see today first debuted in 2010, with some slight cosmetic changes made for 2013. I love the sharp-edged styling; it’s a nice change from the lookalike blobs that so many SUVs have become. For those of us who remember our grandparents’ Caddy’s, there are some nice reminders of those classy rides in the SRX’s overall appearance.

The interior is the most important part of a luxury vehicle. It should constantly remind us that yes, we were justified in spending the extra dough instead of buying a cheap, used Honda. For years, this was a Caddy sore spot and part of the reason sales dried up, but those days are over. The SRX’s cabin is beautifully designed and finished with top-quality materials. The front seats are very comfortable; they include an extendable thigh bolster, a nice touch for the Amazonians among us. Visibility is as good as most SUVs, with a big windshield and wide-eyed side mirrors.

2013 sees the addition of Caddy’s CUE interface, which uses a big touch-screen and a touch-sensitive panel in place of ordinary buttons. Like a tablet or an iPad, this setup works well once you get used to it, but the glossy panel is a magnet for fingerprints, and after a few minutes of use it looks like a preschooler’s art project.

Score another point for the Cadillac SRX. Not only is the back seat roomy, but higher-end SRXs offer first-class accommodations: Independent climate and stereo controls, headphone jacks, and heated seats. (If your kids don’t appreciate all that, your grown-up friends will.) The SRX’s 29.2 cubic foot cargo area is on the small side, but it offers tie-downs and a cargo gate that slides along metal tracks built into the floor. Gruesome but true: In a bad accident, the junk in your trunk can come flying forward and put a nasty dent in the occupants’ skulls. Having gates and tie-downs — and using them when the Cadillac SRX is packed full — helps safeguard your family against injuries in a serious accident.

While many luxury-branded SUVs are kitted out with airbags galore, the Cadillac SRX comes with just the standard six: Two in front, one in each front seat, and two curtain airbags that cover the side windows. But those airbags provide plenty of protection, as evidenced by the SRX’s Top Safety Pick Award from the Insurance Institute of Highway Safety, a prize awarded to vehicles that get the highest-possible marks in its front, side, rear and roof-crush crash tests.

For 2013, the SRX has added optional collision-warning and lane-departure systems with a twist. Instead of just flashing lights or beeping at you, the SRX vibrates the seat — a buzz under your right butt-cheek if you start to drift to the right, for example. It’s unique and it works. The SRX can also automatically brake to avoid a low-speed collision with objects in front of or behind the car. And like all General Motors vehicles, the SRX includes OnStar, which automatically calls for help if the SRX’s airbags deploy, using the vehicle’s on-board GPS receiver to pinpoint its exact location.

Aside from the new CUE interface, the SRX gets standard Bluetooth connectivity, plus an optional rear-seat DVD player with wireless headphones. Most SRX models include a dual-pane sunroof, rear-view camera, and my favorite marriage-saving option: A “memory” feature that positions the driver’s seat, mirrors, and radio presets just the way you like them, even after your spouse drives the car and screws everything up.

The Cadillac SRX is powered by General Motors’ ubiquitous 3.6 liter V6, tuned for 308 horsepower. Most luxury-utes have 300ish-horsepower engines, but nearly all of them require premium gas. Not the SRX — it burns cheap 87 octane. Acceleration is great, but the feel of the brakes left me wanting; the pedal goes deep to the floor before they bite (and they bite hard). On the flip side the ride and handling gets props — the SRX feels sporty and agile, yet always remains comfortable. That said, it doesn’t quite have the rock-solid feel of its Japanese and German rivals. The Cadillac SRX shares some of its mechanical bits with less-expensive GM vehicles, which you can feel in the way it drives.

Pricing for the SRX starts at $38,050, not much more than a nicely equipped Toyota Highlander. And you get a lot for your money: Faux-leather seats, power everything, and an 8-speaker Bose stereo. The price even includes all scheduled maintenance for the first 4 years or 50,000 miles. With all the options, the SRX tops out at $55,415, so it's still a bargain compared to luxury-branded imports like the Mercedes ML350. 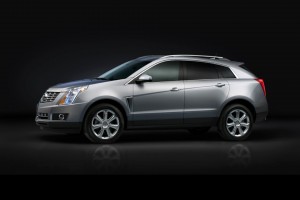 I'd say the SRX counts as a world-class grovel: Ultra-cool styling, lovely interior, long option list, good driving dynamics, and true luxury car cachet — all for the price of a high-end Toyota. The SRX may not quite be on a par with German luxury SUVs, but it's still a good deal for what you get. And I'd suggest getting an SRX now, before Cadillac starts to charge what it's actually worth.