The Cadillac CTS-V quenched my need for speed.The concept of a super Cadillac that redefines the brand is a delicious departure from the sluggish SUV era.

A Helmut Newton photo of two models pumping gas into what appears to be a late ‘60s Cadillac appears in the new book “Nostalgia in Vogue.” One of the models leaning over the back of the Caddy is cloaked in a creamy Trigère suit as the New York City skyline looms in the backdrop. The cut of the suit is notable — sharp, geometric lines that create a memorable shape. The car and the clothes make a breathtaking combo. (Interesting side note: Meryl Streep wore the same outfit when she accepted the Oscar for Best Supporting Actress for “Kramer vs Kramer.”)

In this photo’s accompanying essay, actress and former Trigère model Devon O’Brien describes finding the suit at the designer’s showroom: “It hung in the room like a flag. I didn’t know what it meant, but it signified something,” she writes. Perhaps the significance had to do with the relationship of substance and style, and is a throwback to an era when Cadillac had seductive clout.

Every generation has an interpretation of the Cadillac. For ‘70s babies such as myself, Cadillac became a geriatric car in the bulbous 1980s. In the ‘90s and early ‘00s it was epitomized by the big daddy Escalade that was an authoritative glutton for gasoline. The Escalade was impressive, until it wasn’t.

Once again, Cadillac has gone through a transformative moment taking on a new persona, spurred by the success of the Cadillac CTS-V, that has the swagger of its past but thankfully adds a seductive a twist. This is the Cadillac no one thought GM could make in a million years — a sexy sports car that could go toe-to-toe with BMW 3-series as a daily driver, yet a ride that is as enticing and timeless as the cut of a Trigère jacket.

Cadillac has worked hard to doll up its interior spaces, and the evidence shows in the Cadillac CTS-V. The leather-lined cabin has the ambiance of the lobby at the Four Seasons — very upper crust with only a teensy bit of chrome bric-a-brac. The optional suede on the saffron-hued steering wheel was sumptuous and easy to grip. The same texture is carried over to the shifter. But, in the overall layout category, Cadillac faces formidable competition against design masters such as Audi, and it could still tighten up its interior design ethos with cleaner lines and stitching. I appreciated the extra cushion-for-gas-pedal-pushing that is found in the optional Recaro high performance seats. The backseat was big enough for a kid in a car seat (with kicking room), though the two doors made in and outs a challenge. On the flip side, the stroller and groceries fit easily in the trunk.

A respectable list of standard safety features adds to the appeal of this virile wildcat. Check the box on the categories for dual front side mounted airbags, stability control and traction control. I did get the opportunity to appreciate the tire monitoring system that alerted me to a slow leak in the tire — all too common to the New York City streets that I navigate, though, I’d like to see the actual PSI on the screen.

When it comes to navigation, I want automakers to give it to me straight. Technology in the console should be easy to read, with basic fonts and logical placement of the buttons. GM has achieved that in the Cadillac CTS-V interior — with a big screen approach. The back up camera view was efficient and clear as a bell, not granular like a Gran Turismo video game. When you’ve got a suede steering wheel, heated seats are expected, but ventilated seats are another appreciated (optional) touch for driver and passenger.

This is where the Cadillac CTS-V pulls ahead of the pack with even more power than a Porsche 911 Turbo. The V could stand for Viagra if it wanted to — the 6.2-liter V-8 engine goes from 0 to 60 mph in less than 4 seconds.

But this mother load of 556 hp and 551 lb ft of torque doesn’t bode well for fuel economy misers. Even with economical driving, Cadillac lists the CTS-V as averaging 14 mpg around town. Yet, with all that brawn, it’s a vehicle that has a surprisingly sophisticated ride. I glided along, maneuvering all 4,200 lbs. like a track star.

The CTS-V comes in three speedy shapes – the sedan, the wagon and the coupe. The coupe that I tested had a base price of $65.410. With the extra optional features, like satin graphite wheels and crystal red tint coat, my test car ran well in excess of $70,000. A Tremec 6-speed manual is also available in addition to the automatic transmission in the rear-wheel drive performance vehicles. 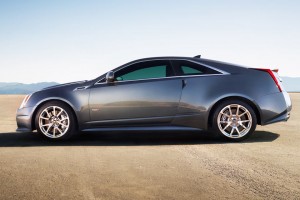 With the CTS-V, Cadillac has redeemed itself as a marque to be reckoned with in realm of fast-lane luxury.

The CTS-V quenched my need for speed.

The push button handles add a touch of futurism.