Cadillac is trying to be the “It” car with the 2013 Cadillac ATS. But with so many choices in at this price, will buyers choose it over Audi, BMW and Lexus?

Cadillacs have always reflected the generation for which they are built: The chrome-laden glitz of the 1950s, the jet-age optimism of the 60s, the faux-baroque opulence of the 1970s, the cheap veneer of the fantastic-plastic 1980s. Even the gloriously gluttonous Escalade was a symbol of excess at a time when that was in fashion, however reluctant we may have been to admit it.

The ATS is a new Cadillac that is once again in tune with our times : Slimmer, trimmer and greener, a car that does its best to deliver an honest driving experience while maintaining a reasonably-sized environmental footprint. Even the styling reflects a new era of fashion, where subtle details — the cut of a jacket, the fine detail of a necklace — are more important than in-your-face flash. This is the modern-day Cadillac: A car for those who want to quietly enjoy their success, rather than broadcast it to the world.

Inside the 2013 Cadillac ATS, the company has spent money like it have never spent before. The design is simple, but materials are as nice as anything you’ll find in a Lexus or a BMW. One eye-catching element is the new CUE (Cadillac User Experience), an advanced touch-sensitive interface that I’ll talk more about in the GIZMOS AND TECH section below. From a design standpoint, CUE contributes to the Cadillac ATS’ clean, uncluttered look — it’s not cold and stand-offish like some German cars, although it lacks the warmth you’ll find in the latest Lexus and Audi designs.

The 2013 Cadillac ATS wasn’t designed to be a family car, and that shows in the back seat, which is reasonably sized but not exceptionally roomy, and the trunk, which is downright meager at 10.2 cubic feet. The ATS is great for taking friends out for the evening or a weekend away with your sweetie, but a family vacation for four would be an uncomfortable squeeze, and impossible with luggage.

The ATS comes standard with eight airbags — two in front, two front-seat-mounted side airbags, a pair of side-curtain airbags, and two more for the driver’s and front passenger’s knees. Rear-seat side airbags are optional, but not on the base model, which seems a little elitist to me. The Cadillac ATS is also offered with advanced accident-avoidance options, including lane departure and forward collision warning systems and active cruise control, which automatically matches the speed of slower cars in your path. And as with all General Motors cars, the ATS comes with the subscription-based OnStar, which automatically calls for help in the event of a crash and uses a built-in GPS receiver to pinpoint the car’s location.

If your perception of Cadillacs is that they are wallowy and boat-like, you’ll be pleasantly surprised by the Cadillac ATS. Designed to compete with the BMW 3-series and Mercedes C-Class, the ATS feels tight and well balanced in the corners, with the optional two-mode sport-tuned suspension (called “FE3”) giving it even quicker responses, if not quite the same direct feel as a BMW. And yet it retains the dignity of a Cadillac: Even with the FE3 suspension in Sport mode, the ATS remains quiet, comfortable, and civilized.

Three engines are on offer for the 2013 Cadillac ATS: The 202 horespower 2.5 liter four-cylinder delivers adequate power and a surprising amount of refinement for a four-cylinder engine. Cadillac expects most buyers will opt for the 2-liter turbocharged 4-cylinder, which delivers 272 hp and strong acceleration. I thought the sound quality was a bit off, but I liked the racy acceleration, plus the fact that its EPA fuel economy estimates — 22 MPG city/32 MPG highway — are identical to the less-powerful 2.5. (The 2.0 turbo is also the only engine available with a manual transmission, and if you can drive stick, it’s an absolute delight. It even has a hill-holder feature, so you don’t have to worry about rolling back on steep hills.)

The final choice is a 321 horsepower 3.6 liter V6, which delivers a more traditional feel at the expense of lower fuel economy (19 city/28 highway). The 2013 Cadillac ATS comes standard with rear-wheel-drive, which contributes to its sporty feel; all but the 2.5 and manual-transmission versions can be had with all-wheel-drive, a good choice if you live where it snows.

Caddy’s latest and greatest high-tech gizmo is CUE — the Cadillac User Interface. CUE encompasses a big touch-screen that runs the stereo and navigation system, as well as a glossy touch-panel beneath it that replaces traditional buttons and dials. CUE incorporates “haptic feedback” — when you press a button-that-isn’t-a-button, the panel pulses under your fingertips, just as some Android phones do. It’s futuristic, but it takes some getting used to; I had trouble with simple things like turning the fan way down. And the glossy surface, which looks lovely when it is clean, is in fact a magnet for fingerprints.

The ATS is sold in four trim levels (Standard, Luxury, Performance and Premium).

Prices start at $33,990 for a 2.5 liter Standard model with faux-leather upholstery, a Bose stereo, and limited color choices (Caddy charges $995 extra for some colors, a bad habit picked up European luxury marques). That puts the entry-level ATS around $2,500 below its European competitors.

A nicely-equipped ATS Luxury with the 2.0T engine runs around $45k, and a fully-loaded ATS tops out at $54,805, far below the German competition but pricey compared to its Japanese rivals. 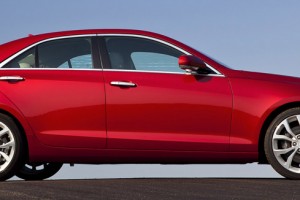 I'm quite happy with the way this new Cadillac turned out. The ATS is a nice alternative to those ubiquitous German luxury cars -- it's every bit as luxurious and fulfilling to drive, yet it has a uniquely American character. It's good to see that Cadillac is keeping up with the times.