This isn’t your mother’s Buick — but she may think paying for the Buick Verano’s inexpensive luxury is the only smart thing you’ve done since giving her grandchildren.

The 2013 Buick Verano is Buick’s entry into the compact luxury market, which means it has competition in the likes of the popular Honda Civic and Toyota Corolla and in the swank Lexus IS250 and Acura TSX. Your mother is happy you found such a nice car at such a nice price, but her friend’s daughter — you remember, the doctor — is driving a Lexus these days.

Buick put a lot of effort into a few key things in order to up the luxury experience: the ride, the seats, the interior colors, and the silence of the cabin. And the Verano succeeds on all these points. However its exterior design isn’t anything to write home about — not that you ever even call home. Does your own mother have to find out everything on the Facebook?

First, those seats, which Buick is so proud of. The idea was to make the seats an after-work reward, not a rush-hour punishment. Following four hours of driving with only a few short breaks, my twisted, scoliosis-suffering spine was just fine. Mission accomplished, Buick. The headrests in the Buick Verano are even angled to accommodate a ponytail.

Next, the color scheme. Here, the designers took great pains to create a cool palette and a warm one, and everything follows suit, from the color of the buttons on the console to the door panels to the leather seats. The warm two-tone brown leather scheme known as Choccachino sounds equally delicious and ridiculous, but there is also a cool black and silver interior. Remember when you and Mom got your color charts done in 1993? This is where you use that information.

The 2013 Buick Verano is very family friendly, with the same comfortable seats for all four places. The rear suspension was engineered for smoothness, but the upshot (without getting technical) is that the structure of the system doesn’t intrude into the trunk space, so there’s more room for Mom’s bags when you pick her up at the airport. The kids will love that Pandora streaming audio is available, but tell them not to listen to their Jay-Z station while Grandma’s in the car.

Like your mother, the Verano is overprotective, with ten standard air bags, tire pressure monitors, and collapsible pedals to minimize foot and ankle injuries in a crash and a steel safety cage around the occupants. Like other vehicles in General Motors’ stable, it’s got OnStar, which automatically calls for help if the car is involved in a bad accident.

The gadgets in the 2013 Buick Verano will confound your mom and impress your kids, so it’s a winner all around. Media gadgetry includes Pandora and Stitcher streaming capability compatible with the 7-inch touch screen, Bluetooth connectivity, USB ports, and voice controls. There are gadgets for comfort, too, like an available heated steering wheel and a remote start system that will pre-heat the seats for you if it’s below 45 degrees.

Buick applied itself when it set out to make the Buick Verano quiet and comfortable, and it succeeded on both counts. Acoustically laminated glass and space-age foam insulation keep outside noise from coming in, and engineers tuned the engine and exhaust to keep the sound from being intrusive. My passenger and I were able to use our inside voices for the entire morning’s ride, even when we passed road construction sites.

The suspension and those lovely seats worked together to keep my back and legs comfortable. Normally at around hour three of a drive, I get tired, want a coffee, and start squirming in my seat. Two out of three occurred in the Buick Verano, and it took me a few minutes to realize that the missing element was the squirming in discomfort.

The design of the Buick Verano will either strike you as something you like, or it will pass you by unnoticed. It’s not a radical design, and the front end carries the Buick heritage in the grille. There are two slices of chrome over the rear lights that provoke reactions from nearly everyone — you can’t be neutral about the “eyebrows,” it seems.

The Verano was not engineered to be a sport-luxury compact sedan, and it shows. If you get the base-model 2.4 liter engie, you’ll want to make sure the passing lane is clear before flooring the pedal, and expect it to scream like you missed curfew. (The trade-off for power is 31 mpg on the highway.) The top-of-the-line model gets a powerful two-liter turbcharged engine, which may elicit warnings from your mother about fast women. What about handling? If you are the type who likes to throw a car around the curves, the Verano will ask you to act your age. If you want to be treated like a grown-up, young lady, drive like it.

You were taught you the value of a dollar, so you’ll be happy to see the Buick Verano starts at $23,975. It comes with 18-inch alloy wheels, radio controls in the steering wheel, and a bunch more. Leather-lined models start at $27,650, while the top-of-the-line turbo model runs $30,000 even. 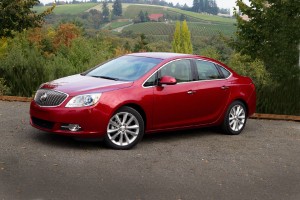 Buick set out to build a compact luxury car that competes on comfort and price, not sportiness and rakish style, and it did a fine job. Its mother must be so proud.

The seats are to-die-for comfortable.

You cannot beat the features for the price.

Choice of anemic base engine or expensive turbo engine.

One Response to “Buick Verano”