The 2013 LaCrosse is Buick’s flagship sedan, and it now comes with a low-cost “mild hybrid” system to boost fuel economy.

Not long ago, a woman I know asked me what car she should buy to replace her Toyota Avalon. I suggested a Buick LaCrosse, but from the look on her face, you’d think I suggested she lick the floor of a New York City taxicab.

“I can’t buy a Buick,” she said. “I haven’t even gone through menopause.”

I made a mental note to use that line in a review (done — that’s one more thing to cross off the bucket list), and then asked her if she knew that the average age of a Buick buyer is thirty-five. Her face lit up, and she said she would put the 2013 Buick LaCrosse on her short list.

What I failed to mention is that the average age of a Buick buyer in China is thirty-five. Here in the US, Buick buyers are 57 and dropping steadily. (Um, make that their age is dropping steadily.) The fact is Buick is attracting new buyers in droves, with a respectable percentage coming from import brands. So I maintain that my lie of omission will serve the greater good, because if our current Avalon owner does buy a Buick LaCrosse, she’ll get a lovely car — one that is beautifully styled, supremely comfortable, well built, and offers excellent value for money.

You might well expect the Buick LaCrosse to boast old-fashioned fake-wood-and-chrome luxury. You will find wood and something vaguely resembling chrome, but there’s nothing old-fashioned about the elegant, swooping shape of the dash. I really like the 2012 Buick LaCrosse’s ambiance, even if the fabrics and plastics don’t quite feel as good as they do in a Lexus or a Mercedes. And I do wish the stereo and climate control didn’t have so many buttons — surely Buick could simplify the controls a bit.

From the driver’s seat, I felt a bit like a little kid wearing grown-up shoes. The Buick LaCrosse is a pretty big car, and for short-ish drivers like me (5’6″) the tall sides and high cowl make it feel even bigger. Thank goodness for the height-adjustable driver’s seat! It helps visibility to the front, but the small rear window pinches the sightlines to the rear. Best to spring for the optional rear-view camera.

As you’d expect from a big sedan, the Buick LaCrosse has a generous back seat that will happily accommodate big kids, little kids, and every kid in between. But the trunk is a different story. As of 2013, all 4-cylinder LaCrosse models come with eAssist, a “mild hybrid” system that we’ll talk about a little further down the page. The eAssist system puts a modest-sized battery in the trunk, which squeezes cargo space down to 10.9 cubic feet, making it a tight fit for big strollers. (I say let the kid walk. So what if he’s only 5 months old? Life is tough, best they learn that early!) V6-powered cars get a conventional power train, but the trunk is still rather small at 13.3 cubic feet.

I’m tempted to make a joke about the crash-test dummy suffering a broken hip, but the truth is that the Buick LaCrosse has excellent crash-test results. It scored top marks in the Insurance Institute for Highway Safety’s crash tests and nabbed a Best Safety Pick award. And every version comes with Buick’s OnStar system, which automatically calls for help in any crash severe enough to deploy the airbags.

The LaCrosse’s video screen has a large print option, and the center console contains a dispenser for Social Security checks. Kidding! Kidding! Actually, the Buick LaCrosse is rather tech-savvy. The high-res video screen, used for both navigation and the iPod-compatible stereo, has a nicely designed interface, and the available IntelliLink system can interface with the driver’s smart phone to provide services such as Pandora or Stitcher internet radio.

If you’re expecting the Buick LaCrosse to feel floaty and disconnected, you’re going to be disappointed. Though the ride is tuned for comfort, the handling is respectably sharp and responsive. It’s as good as most Japanese luxury cars, if not quite in BMW or Audi territory. And Buick’s whole “Quiet Tuning” thing is not just an ad slogan; the Buick LaCrosse really is as quiet as a library.

The 4-cylinder Buick LaCrosse comes standard with General Motors’ eAssist system, a so-called “mild hybrid” that, according to GM, boosts fuel economy by around 25%. eAssist replaces the alternator (the device that charges the car’s battery) with a heavy-duty motor-alternator that can feed up to 15 horsepower into the drivetrain to assist the 182 horsepower 2.4-liter engine. When the car slows down, the motor-alternator charges the eAssist battery in the trunk. eAssist also shuts down the engine when it’s not needed (i.e. at stoplights) and restarts it when the driver steps on the gas. Fuel economy estimates are 25-MPG city/37 MPG highway — not as impressive as a full-on hybrid like the Lincoln MKZ Hybrid or Lexus CT 200h, but pretty good for such a big car. For traditionalists, the Buick LaCrosse is also offered with a 303 horsepower 3.6-liter V6 rated at 17-MPG city/27 MPG highway; V6 models are also available with all-wheel-drive.

Pricing for the LaCrosse starts at $32,555, and includes the eAssist 4-cylinder engine, dual-zone climate control, CD/USB stereo, and a power driver's seat. The LaCrosse is available in a dizzying array of trim levels: Base, Convenience, Leather, Premium I, Premium II, Premium III, and Touring, each offered with several options. (Perhaps this is an attempt to attract younger buyers — anyone over 70 will die of old age before they find the exact LaCrosse they want!) Still, pricing remains reasonable even as you pile on the options: A Touring model with all the trimmings, including heated leather seats, a backup camera, rear-seat DVD player, sunroof, navigation, and more, tops out at a very sane $43,915.. 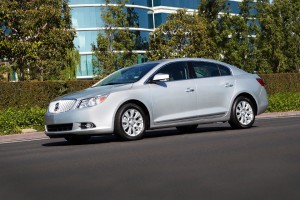 Buick is working hard to shed their old-lady image, which shows in the LaCrosse, yet they haven't totally abandoned those of us who are old enough to appreciate a little R&R. The LaCrosse is beautiful to look at, elegantly appointed, and relaxing yet responsive on the road. If you can get over the brand's image, you'll be impressed by the LaCrosse — after all, those 35-year-old Chinese women can't be all wrong.