The BMW 5-series is a great luxury car, but the 2013 BMW ActiveHybrid 5 simply doesn’t do what we expect from a hybrid.

When I say “Hybrid,” what do you think of? Blue skies? Green fields? Wind-cheating cars zooming silently hither and thither with flowers coming out of their exhaust pipes? Reality check, ladies: The 2013 BMW ActiveHybrid 5 is not that sort of hybrid. Rather, it’s the sort of hybrid for people who want others to think of blue skies and flowery tailpipes while they zoom hither and thither in a hot-s**t BMW.

Before we proceed, I should tell you that the BMW 5-series is a wonderful car — one my favorite luxo-yachts, as a matter of fact, and I will recommend it to my dying day, or at least until they replace it with a new edition that I don’t like as much. But the hybrid version is a half-hearted effort that costs you more and saves you less — an utter waste of money, if you ask me.

The interior is not the ActiveHybrid 5’s problem. Actually, it’s quite lovely — high-grade materials, tasteful trim, and no-nonsense gauges that give you just the facts, ma’am. At 5’6″, I found the seats quite comfortable, but we’ve had complaints from shorter folks (including Tara, our VroomBoss) about a lack of seat comfort for the vertically challenged — so be sure to take a nice long test-sit, as you should in any car.

The ActiveHybrid 5’s navigation, climate and stereo systems are controlled by a single dial, BMW’s infamous iDrive system. Programming the navigation system can get rather complicated, and the voice-recognition system isn’t very good; fortunately there are redundant buttons on the center console to run the air conditioner. The entire system takes some getting used to.

I was surprised to learn that the 2013 BMW ActiveHybrid 5 only has six airbags; many cars today (most of which cost a whole lot less than this BMW) have eight or ten. But that’s apparently enough, because the ActiveHybrid 5, like all BMW 5-series models, has a perfect five-star safety rating from the Government and a Top Safety Pick award from the Insurance Institute of Highway Safety.

My test car had both blind-spot and lane-departure warning systems (added cost options); the first scans for cars sitting in your blind spot, and the latter uses cameras to look for the lines in the road. If you start to drift out of your lane — or if you signal a lane change when there’s a car in the way — it alerts you by vibrating the steering wheel, a nice gentle alternative to the panic-inducing beepers found in most cars (and your passengers never have to know that you almost merged into a Buick, not that this happened to me).

The 2013 BMW ActiveHybrid 5 doesn’t seem to have been designed with kids in mind, but it still does the job pretty well; the back seat is spacious and upholstered in easy-to-clean leather. Like most hybrid sedans, the ActiveHybrid has an abbreviated trunk — 10 cubic feet instead of 14 in other 5-series cars — but the boxy shape makes good use of what space there is. Unfortunately, because the hybrid battery pack lives between the trunk and the back seat, the seatback can’t be folded down, so the ActiveHybrid 5 won’t accommodate extra-large items like giant strollers or steamer trunks.

While most hybrids use a small gasoline engine assisted by an electric motor, the 2013 BMW ActiveHybrid 5 uses a big gasoline engine — the 3-liter turbocharged six-cylinder from the sporty 535i. Combined power output from the gas engine and electric motor is a healthy 335 horsepower, 35 more than the 535i. Unfortunately, the hybrid system adds 380 lbs of weight, so the ActiveHybrid 5 doesn’t accelerate any faster. But it gets better fuel economy, right? Er… not really, no. The BMW ActiveHybrid 5 is EPA-rated at 23 MPG city and 30 MPG highway, only 3 MPG more than the plain ol’ 535i in the city and identical on the highway. I averaged a disappointing 24.6 MPG in mixed driving. And while most BMWs are notable for a smooth driving experience, the ActiveHybrid 5 isn’t — if you put it in “Eco Pro” mode, which theoretically produces the best fuel economy, it bucks and jerks under acceleration.

Not that the BMW ActiveHybrid 5 is completely terrible to drive. In some ways, the hybrid system works rather well — it has a seamless auto-stop system that shuts off the engine when coasting or sitting at stoplights, and like other hybrids it will glide silently along on electric power at low to moderate speeds — though its electric-only range of 2.5 miles is not enough to make a serious dent in fuel economy. The ActiveHybrid 5 is quiet and comfortable on the freeway and a real athlete in the curves — it is, after all, a BMW. But you can get that experience in any BMW; you don’t need to pay extra for the hybrid.

Here’s the punchline: BMW makes a four-cylinder version of the 5-series called the 528i. It’s not quite as quick, but it gets better fuel economy than the ActiveHybrid 5: 24 MPG city and 34 MPG highway per the EPA, and 26.3 the last time I drove one. Equipped with the same options, it’s nearly $10,000 cheaper than the ActiveHybrid 5. In other words, it would take years, and quite a lot of driving, to make the BMW ActiveHybrid 5 a better value than it’s base-model sister.

BMW offers all sorts of extra-cost gizmos, some more useful than others. My car had an electrically-operated trunk lid, which I found rather handy, and automatic rain-sensing wipers, which I should have found handy, except they have to be manually switched on every time it rains… so they aren’t really all that automatic.

My test car also had a night vision camera, which uses an infra-red camera to show a video image of the road ahead, with pedestrians highlighted. A nifty gadget — too bad it displays the picture on the dashboard. (You can’t exactly drive down the street staring at the screen on the dashboard, can you? I suppose you can, but it’ll be difficult to explain to the officer why you sideswiped those parked cars.) I’d pass on that pricey option, but I’d opt for the active cruise control system, which automatically slows down to keep a set distance from the car in front, and the soft-touch doors that can be closed gently and then cinch themselves tight – which is a very elegant touch.


The 2013 BMW ActiveHybrid 5 is sold in a single trim level, priced at $62,295. Though it comes with some equipment that is optional on other 5-series models -- navigation and leather upholstery, for example -- BMW still offers over $25,000 worth of extra-cost options. My test car stickered for $74,420, about $6,000 more than a comparably-equipped 535i and neary ten grand more than a similar 528i. 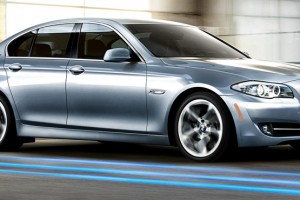 I was disappointed by the 2013 BMW ActiveHybrid 5. It's a very nice BMW, but a terrible hybrid -- one that does little to save fuel or reduce pollution. BMW should be ashamed to sell a hybrid that gets worse fuel economy than other members of the 5-series family.

If you want a luxury hybrid, the 2013 Lexus ES300h is a better choice -- it delivers excellent real-world fuel economy and a sizable array of high-tech, high-lux options. If you're willing to buy off-label, the closely-related 2013 Toyota Avalon is another good alternative. And if you value ecology above luxury, consider the 2013 Toyota Prius or the family-sized 2013 Toyota Prius v, both of which will go twice as far as the BMW on a gallon of gas and can be had with features like leather, navigation, and active cruise control.

As for the 2013 BMW ActiveHybrid 5, I recommend you skip it. The BMW 5-series is a lovely car, but the hybrid just doesn't work. Opt for the BMW 528i instead, or the smaller (and more frugal) BMW 3-series -- you'll save money on payments and gas... although you probably won't see flowers coming out of the tailipipe.

It's a BMW, which means it's stylish and enjoyable to drive

For a pricey hybrid car, the gas mileage is lousy