It’s the bread and butter car of BMW, but don’t let its ubiquitous presence or its entry-level stature fool you into thinking it’s not a well-made sporty car. The BMW 3 series is the brand’s best-selling vehicle, and it’s one of our favorite cars of all time. Debuting in February 2012, the model line-up will get a redesign. Think of it as trying to improve on what is near-perfection already.

The year was 1975 and BMW launched its new 3-Series, a sporty five-seater that set the bar for the emerging sport-sedan category. It was an instant hit. Nearly 37 years later, the BMW 3 series is as popular as ever: stylish, sporty and practical. It’s also one of the few cars that men and women seem to love it equally.

The BMW 3 Series is a car without compromises. It is comfortable enough in commuter traffic but awakens should the driver want to feel the road. It comes in so many versions — 15 to be exact — with different engines, and with all-wheel drive for better traction in bad weather, or two-wheel drive which is fine in a sunny climate. Then there’s this: a two-door coupe, a four-door sedan, a convertible or a wagon. Talk about a smorgasbord of choices.

If you don’t care about speed, the 230 hp BMW 328i is plenty powerful. It’s not the zippiest of the bunch, but we’re not all speed freaks. Those wanting to punch it off the line will appreciate the more aggressive 335i, with 300 horsepower. Both produce nearly the same fuel economy, with the BMW 328i getting 18 mpg city / 28 mpg hwy, and the BMW 335i getting 17 city / 28 hwy.

I love it, though I’m partial to the 335i over the 328i because of the more enthusiastic engine. I find the BMW 328i a little sluggish. But again, if you are not one to need the power, why pay for it in a more expensive engine?

Handling is fantastic in all BMW 3 series vehicles. But again, some versions are even better than others, with traction settings that allow for more spirited and sport driving. These are optional features (read: you pay more) on higher-priced 3 Series versions, like the M3.

My favorite BMW 3 series is the BMW 335d, a diesel version of the sedan, which gets 23 city / 36 hwy. BMW says you can achieve 580 miles on a tank of gas, but I’ve never experienced that. And I’m not sure how it can be done without eschewing city stop-and-go traffic and spending the entire time on the highway.

Beyond the improved fuel economy over the others in the BMW 3 series stable, the BMW 335d has great torque, meaning it is quick off the line, as well as being able to accelerate fast in any gear, even at cruising speed on the highway.

The wagon and convertible versions of the 3 Series are tops with me. The wagon is an excellent alternative to SUVs and crossovers, and gives sportier performance than those vehicles with a higher center of gravity. The 3 Series hard-top convertible is gorgeous, and gives you the option of open-air driving, or the quiet calm of a hard-top cabin. Best of both worlds.

Pretty and simple. I always think of the Four Seasons hotel in Manhattan when I drive a BMW. The hotel, and the car, are simply decorated with a less-is-more aesthetic. Clean long lines, not punctuated with loads of buttons or gadgets.

The BMW 3 series comes in trims that include strips of glossy burled wood or clean and contemporary aluminum. Seats are bolstered on the sides, so your torso is held in place around corners. It’s a great feature that keeps you tucked in.

BMW has a variety of advanced technology to help avoid injury in case of a crash. Active headrests work to prevent whiplash. Seat-mounted side airbags come standard, and work in conjunction with reinforced doors that help protect against intrusions during a side impact. And a crash sensor cuts off the fuel pump and alternator from the battery, unlocks all the doors, and automatically turns on the car’s interior lights and its outside hazard lights.

The most important new technology BMW offers is ConnectedDrive, which links your smartphone to the car. This way, you can hear your texts and emails while you drive, instead of reading them. Texting while driving is a big no no! BMW Night Vision employs infrared cameras (like the military uses in combat situations) to see pedestrians and animals that might be lurking on the road at night up to 300 feet away. And BMW TeleServices is like having a mechanic with you at all times. It monitors your car’s health and sends a message to the dealership if fluids are low or parts are broken. Then, the dealership will contact you for an appointment to bring in the car for repairs, and even pre-order the parts.

With 15 different versions of the 3 available, you’ll have trouble choosing. Here’s a “Best Of” list: 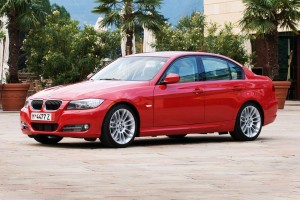 The BMW 3 series is loved by commuting moms, speed freaks and up-and-comers in the business. With a huge amount of options — from body style to engine to interior creature comforts — there will always be a 3 just right for you.

The 3 Series' wide range of engines and styles fits every taste.

Can't think of a thing.