All the style of a coupe with the practicality of a four-door. We love the 2013 Audi A7 for its big city looks, its zippy performance and its sedan comfort.

Five, six, seven, … and the 2013 Audi A7 was off on and gliding down the highway. When I say gliding, I mean hips swaying, butt tucked in, chest lifted, and stomach muscles flat as a board. That’s because driving the A7 was like dancing with a star – it’s a well-groomed looker, blessed with a sleek roofline that works from the core. The A7 handled street-style choreography with noted grace, which makes it a contender for best in show this season.

When it comes to interiors, I’m a fan of understated design. I want everything so well thought out that it feels natural, intuitive, like Alvin Ailey’s “Revelations.” That means no garish metals or painted over plastics, Nav screens that aren’t so overdone that they’re distracting, or seats that look like an Art Van sofa. The 2013 Audi A7 interior is done just right – the center consul is elevated, which makes the cabin feel more spacious. Every material is real and tactile, without being obnoxious. The model I tested was all black everything, with a four-spoke leather wrapped steering wheel, and a five-inch monochrome Driver Information System (more on that later.) I appreciate the natural light that pours through the tinted power glass sunroof. The shifter reminds me of a high-end Italian light fixture. The backseat is reserved for just four adults, not five, like a usual sedan. There is roominess and a very spacious center console for backseat riders that makes the passenger experience oh, so civilized.

I’m getting so used to test driving cars equipped with front and rear back up cameras, that I may soon forget how to parallel park without them. The 2013 Audi A7 is stocked with technological safety features, including: Blind Spot Monitoring, which alerts the driver with blinking lights when a car or object passes into the A7’s blind spot; Active Cruise Control, which makes sure the Audi A7 doesn’t get too close to the car up ahead – automatically braking to keep a safe distance, and then accelerating again when it’s safe; and Lane-Keeping Assist, which beeps when the Audi A7 veers out of its lane, to assure that the driver doesn’t nod off or get distracted. Of course, there are all the airbags you’ll need, a tire pressure monitor system and an anti-theft system included.

Precision. Tightness. Swift. Words that the Audi A7 brings to mind when it hits the stage. Handling is flawless, as if I am spotting my partner on a turn. The 3.0-liter supercharged V6 engine has 310 hp and an eight-speed automatic transmission with Tiptronic (a clutchless manual mode), which executes with remarkable timing. The tap of the toe reveals the Audi A7’s wild side, with a delightfully quick 0-60 mph time of 5.6 seconds. Like all Audis, the A7 is also all-wheel drive, which generally knocks down fuel economy, but the A7 gets best in class with 18 mpg in city conditions and 28 mpg on the open road, thanks to a well-orchestrated super-charged engine. Just writing about it makes me long to drive the A7 again.

Audi is the Apple of the car industry – and I don’t mean the fruit. Technology is functional, intuitive and fun. One-touch buttons are a relief after twisty knobs and dials that feel so much more business-like IBM on BMWs. Only a finger is required to scroll down a touchpad to change the Nav location, which of course was born on an iPad. Speaking of extras, another Apple-like nuance is the ability to plug in eight devices for wireless connection. Audi Connect opens up access to Google Earth navigation, and the virtual world is yours to navigate, leaving less room for the days of Mapquest error.


The base level Audi A7 starts at $60,995. The car I tested was priced at $73.210, with the Prestige package that gave me an S-line exterior, navigation, Bose speakers, and the extra tech gadgets I admire. I’ve learned that a fully loaded A7 can run about 80 grand. The A7 beats another schnell stellar competitor, the Mercedes-Benz CLS550, a faster but more expensive sedan that starts well above $80,000. 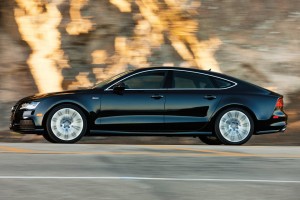 I’m a dancer, an Apple devotee, and now a big fan of Audi A7, which marries these passions seamlessly.

A sweet spot for Audi – the A7 settles between the fussy A8 and the mid-side sedan A6 - it delights like a sexy pair of Louboutins.

The exterior design has a distinct, lovely tear- drop surface that reminds me of work by my favorite German-born sculptor Justen Ladda.

With just room for four and a sloping roofline that could make extra-tall passengers have to duck, the backseat has limitations.

One Response to “Audi A7”