If you and your partner can’t agree on what makes a good luxury car, the 2013 Audi A6 may be the one car that pleases you both

My wife Robin has always liked Audis better than I do. It comes down to a basic difference in philosophy: I think a luxury car ought to be as opulent as a Victorian boudoir, while Robin’s ideal luxury car is one that can out-accelerate an F-22 fighter jet. That’s why she has always loved Audis, while I find them a bit too austere. In the Audi A6, however, we have finally found an Audi on which we can agree — one in which Robin can actively exercise her disdain for speed limits, while I can sit back in the passenger seat and visualize the baronetcy which so far has eluded me. We even agree on the styling: Older versions of the A6 looked a bit blobby and melted, as if someone accidentally left it on the radiator overnight, but the current A6 looks chiseled and strong, like Brad Pitt with his shirt off. (Alas, with my shirt off, I look like the old Audi A6.)

Past Audi interiors were cold and monolithic, with all the charm of a Soviet-era war memorial. With the A6, it appears that perestroika has finally hit the design department, and they’ve crafted an interior with all the warmth and luxury that us capitalist pigs have come to expect as a reward for exploiting the proletariat. Everything looks and feels expensive, with tastefully restrained use of wood and silver trim and a nifty LCD display screen that folds away when it’s not in use.

Alas, while luxury is a trait highly valued in Audi’s home country of Germany, simplicity isn’t. Many of the A6’s secondary functions, including the stereo and navigation, are accessed through a single dial, called the MultiMedia Interface (or MMI), often buried beneath a layer of menus. I’m not crazy about this system, because no matter how well you know it, you have to look at the display screen to use it — and that means taking your eyes are off the road. Germans, who love speed and the Autobahn, should not provide a system that requires distraction.

The A6 is Audi’s large luxury sedan, larger than the mid-size A4 but not as big as the aircraft-carrier-size A8. Audi has gone out of their way to make best use of the A6’s space; the back seat is accessed through big, tall doors, which provide plenty of maneuvering room to get babies into their seats or help elderly parents in and out. And should you be raising a family of basketball players, the 2013 Audi A6 provides lots of back-seat legroom. The trunk measures up at 14.1 cubic feet, not the best in class, but big enough for bulky strollers or over-packed suitcases.

German automakers are mavens for safety, and the Audi A6 is no exception. An IIHS Top Safety Pick winner, the 2013 Audi A6 comes with eight standard airbags (though many cars now come with 10), including a pair that protect the driver’s and front-passenger’s knees, and side airbags for the rear seats are optional. Other safety-related options include Pre-Sense Plus, which can detect when a collision is imminent and prepare the car by tightening the belts and priming the brakes, and a night-vision camera system that displays what’s ahead right on the dashboard, detecting and highlighting pedestrians and animals on dark roads.

The 2013 Audi A6 offers enough electronic gadgets to give Bill Gates a migraine. Some are truly useful, like the optional head-up display that projects speed and navigation directions right on the windshield. The infotainment system offers a T-Mobile wireless data connection (free for 6 months, then $25-30 per month), so you can perform Internet-enabled searches for all sorts of things and send the addresses directly to the navigation system — very, very cool. It also serves as a Wi-Fi hot spot for up to 8 devices.

But other gadgets aren’t as neat as they sound, like the handwriting-recognition sensor. You can program the navigation system by writing your entries, tracing them out on a little pad just next to the shifter. Sounds cool, right? Well, it is, except that there’s a reason we invented typewriters and word-processors: Writing anything by hand is slow. And the touch-pad also doubles as the radio-station selector, so if you happen to brush your hand too close to it, it changes the station (or switches to radio if you’re listening to your iPod). Annoying!

Past Audi A6s offered V6 and V8 engines, but the new A6 comes with either a more fuel-efficient turbocharged four-cylinder or a supercharged V6 engine. Turbochargers and superchargers are devices that force-feed air to the engine under heavy demand (i.e. when my wife Robin is driving). More air means they can burn more fuel, which produces more power, like a larger engine. But when I drive, the super/turbocharger stays dormant, boosting fuel economy.

My test car had the 3-liter V6; it’s rated for a modest 310 horsepower, but feels much faster. That’s because Audi puts all of their cars on a strict diet, with extensive use of aluminum to keep the weight down. EPA fuel economy ratings are 19 MPG city and 28 MPG highway, and I averaged 21.9 MPG, very impressive for a car this big and quick. All Audi A6s come with all-wheel-drive, which provides great grip in bad weather and improves handling and road stickiness in the dry, something Robin was only too eager to demonstrate to me at every single street corner. Even so, the ride is quiet, comfortable and peaceful, more serene (like a Lexus) then sporting (like a BMW).


As German cars go, the A6 is one a heck of a bargain. Pricing starts at $45,395, quite a bit less than the cheapest BMW 5-series or Mercedes-Benz E-Class. And when you factor all the stuff that's standard on the Audi but optional on the Bimmer and the bottom-barrel Benzo -- leather seats and all-wheel-drive, for example -- the price gap grows even further.

All A6s include automatic lights and rain-sensing wipers, a sunroof, front and rear air conditioning, and an iPod-compatible stereo. V6 models start at $51,295, and a top-of-the-line A6 Prestige with every available option will run you just over $75,000. 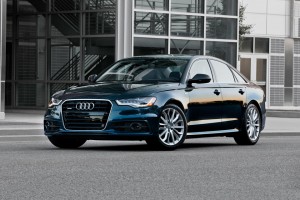 The A6 may well be one of the best luxury cars Robin and I have tested. It's opulent enough for me, fast enough for her, and affordable enough that we would only have to sell one of the children to swing the payments. Sure, it's a bit complicated to use, but so are most German luxury cars -- and most of the available techno-gadgets are actually pretty darn useful. As far as big luxury sedans go, the Audi A6 is my favorite -- and I think my wife would agree.

One Response to “Audi A6”