Vivacious, Valiant, and VaVaVoom…VroomGirls says V is for Vanquish!

Be Still My Heart

Style, form and function. It’s a dodgy dance in the automotive world, and very few car makers get it right. Sure, each car has four wheels, a windshield, headlamps, bumpers and the like. But what the marques do with these necessities is what sets the brilliant ones apart. And that’s where Aston Martin elevates itself. According to the company’s president, “beauty is number 1 for us; we should be as close to art as we can get.” At the corner of gorgeous and vroom vroom, Aston is always in a league by itself. And with its 2015 Aston Martin Vanquish – a stunner of a two-door coupe – style, form, function and speed are seamless and profound. Pretty, fast, capable and exclusive. Quite the party.

Glove-soft leather seats, with contrasting color stitching in a rich diamond pattern reveal an attention to detail not found in everyday luxury brands like Mercedes Benz. Everything that looks like metal, is metal, and feels cool to the touch and solid. In some other luxury makes, “chrome” door latches and AC vent accents are actually chromed plastic. Tap on the real deal in the Aston Martin Vanquish and you’ll hear and feel the difference. In the 2013 Aston Martin Vanquish, polished aluminum trim adorns the dashboard, the steering column and the door panels. For a sport-tuned look, optional carbon fiber trim is available. And standard is a padded suede-like Alcantara roof liner that is soft and plush overhead.

It would be a crime not to push the 2015 Aston Martin Vanquish a bit. It is, after all, a supercar meant for speed and performance. It truly isn’t just a pretty face. Wearing a monster of an engine – a 6L, V12, 565 horsepower – it begs for a bit of flogging. It goes from a standstill to a raucous 62 MPH in a snap – 4.1 seconds. And just to be on the safe side, the 2015 Vanquish has race-inspired ventilated carbon-ceramic performance brakes, which quickly stops this charging beast.

To make the 2015 Aston Martin Vanquish agile and predictable in its handling, super lightweight aluminum and carbon fiber materials are used in the car’s body and frame, making it also more fuel efficient, thanks to its trim weight.

And then, there’s that indescribable Aston Martin engine note. It’s low, and throaty and deep and ever so sexy. To drive along a winding country road, to press the accelerator and hear it respond with a baritone symphony of sound, is to hear automotive engineering excellence at the highest level. So fantastic is that engine sound, it should be a ring tone!

The new 6.5″ color touchscreen infotainment center features a crazy-great 1,000-watt Bang & Olufsen BeoSound system with 13 speakers and a Garmin navigation system. The touchscreen has haptic buttons – a word you’ll be seeing a lot in the auto world, which means that when you push the touchscreen, it feels as if you’re pressing a button. It pushes in to let you know it is responding to your command. 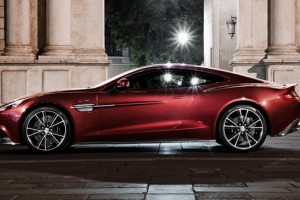 James Bond's preferred ride has traditionally been the oh, so British and posh Aston Martin. And why not? Like the handsome man himself, it gets a girl's attention.

One Response to “Aston-Martin Vanquish”