To make it even sexier, Aston Martin takes the top off its super-fast Vanquish and calls it the Vanquish Volante.

10 Things To Know About The 2014 Aston Martin Vanquish Volante

Volante is Aston’s proprietary word for its convertibles.

The Vanquish Volante is lithe, agile and fast because it’s so lightweight, thanks to an all carbon fiber body. But the carbon fiber isn’t just for performance, it allows for incredible creativity and subtlety of design. The material is heated and molded to create curves that just couldn’t be accomplished using a steel body. Think of it as a gorgeous sculpture with a genetic need for speed.

The beautiful winged hood ornament is made by a jeweler in Birmingham, England.

There was a time when being called a “fast” woman was derogatory. In the 2014 Aston Martin Vanquish Volante, it’s a compliment. Go from 0 to 60 in an astonishing 4.1 seconds.

The Vanquish Volante is a Grand Touring vehicle, also referred to as a 2 + 2. In plain terms, it is a two seater up front, with two small seats in the back – these can hold very small children, well-behaved dogs, and a well-edited selection of just the right shopping bags. Not to worry about cargo space. The ample trunk holds two suitcases and still has room for a case of Krug.

Make the 2014 Aston Martin Vanquish Volante your own. Order any color, inside and out (for an extra charge), and even choose the style of stitching (a honeycomb pattern is quite fetching.) Favorite nail polish color, your dog’s collar, even a swatch of fabric. The Aston folks will match it.

Ample use of lightweight carbon fiber inside and out not only adds to the car’s performance, it looks rich and sporty. It’s even configured into a herringbone pattern on the Vanquish’s dashboard.

Your gal pals will beg for you to drive. The 2014 Aston Martin Vanquish Volante has super-soft leather seats that are slightly bolstered for torso support. The seats are suple, not hard. And little touches like the starter button (insert the stylish key fob into a slot in the center of the dash and just push), and the gauges, which look like jewelry, are full of whimsey. Should the sport demon in you rear its head, switch gears using the sporty steering wheel-mounted paddle shifters on this six-speed automatic.

Driving is a breeze. While the 2014 Aston Martin Vanquish Volante looks as though it could be a beast to handle – so sporty it hurts – it’s as simple to maneuvrer as was your first car, though surely not as fun. Just push the drive button and go. Or play with the paddle shifters for a more involved driving style.

Better yet, hit the sport button and call the doctor – it’s sure to skyrocket your blood pressure. Once the sport mode is engaged, the Vanquish Volante’s power increases exponentially; you feel it instantly. And the transmission converts from maintaining a fuel efficient mode to one that hold gears to get the most power out of each gear. One caveat: Cops love the Aston sports button. It helps to fill city coffers. 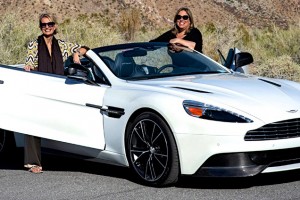 Style so cool, it's almost embarassaing

Comfy seats and interior gadgetry that's easy to use

One Response to “Aston-Martin Vanquish Volante”