8 Things To Know About The 2014 Acura TSX Sport Wagon

The Acura TSX Sport Wagon was actually designed for the Honda brand (Acura is a division of Honda); in Europe and Japan, it’s labeled as a Honda Accord. Those Honda roots show in the interior, which isn’t as cushy as most luxury cars. But the seats are very comfortable, and the road visibility is good.

The driver seat memory function is a marriage-saver — whenever I drive my wife’s car, she complains that it takes her forever to get the seat and the mirrors the way she likes them. With the 2014 Acura TSX, I can put everything back with a single button.

You can’t get much more family-friendly than a wagon. The back seat isn’t the biggest, but it’ll work for most kids from maternity ward to graduation day, although the lower ride height means more bending to get babies into car seats than an SUV or a minivan. The sousaphone-sized cargo area offers 25.8 cubic feet of space, as much as a small SUV, and is lined with thick, hard-wearing carpets. Clearly, whoever designed this car had kids!

To me, the high point was the handling. What a nice change from an SUV! The Acura TSX Sport Wagon is light and nimble and a lot of fun in the curves; it brought me back to my college days and the Honda Civic my then-girlfriend drove. But the trade-off is the ride, which is a bit hard and noisy for a luxury car.

The Insurance Institute for Highway Safety gave the 2014 Acura TSX a Top Safety Pick Award, reflecting its excellent scores in front, side, rear, and roof-crush impacts. But where the TSX Sport Wagon excels is its ability to avoid an accident — it’s light and agile, so it can stop and turn quicker than a comparably sized SUV.

Acura bills itself as a high-tech brand, although most of the gizmos seem to be designed for guys like me to brag about. Take the air conditioner, which uses GPS to track the position of the sun and adjust the temperature on the warmer side of the car. I thought that was the coolest thing ever, but my wife said “Can’t we just change the temperature ourselves?” She was much more enamored with the heated seats, which come standard.

My wife and I both liked the navigation system’s real-time traffic and weather, but neither of us were particularly fond of the nav system itself, which is fussy to program. And we had a lot of trouble with the Bluetooth speakerphone. It worked fine with my phone, but my wife’s wouldn’t stay connected. Acura has a web site with a list of compatible phones, but it seems silly to have to buy a new phone to go with a new car.

As a guy writing for a woman’s publication, the 2014 Acura TSX Sport Wagon puts me in an awkward position. I love wagons; they offer the space of an SUV with the gas mileage and driving characteristics of a car, and I frequently recommend them to my readers. This horrifies my mother, who fought for the ERA and has lumps on her head from hitting the glass ceiling. She sees the wagon as a sign of oppression, a throwback to the days of “Show her you love her — bring home a new O-Cel-O mop!” I tried telling her that times have changed, that you can be a modern woman and stay home with your kids, or wear a skirt to work, or drive a station wagon. She called me a misogynist and hung up on me.

Acura sells two versions of the TSX. The base model sells for $32,755, which includes leather seats, an iPod-compatible stereo, and Bluetooth speakerphone. For $36,405, you get the TSX with Technology Package, which comes with navigation, a rear view camera, a power tailgate, and a nicer stereo.
The 2014 Acura TSX Sport Wagon doesn't have many direct competitors; it's less expensive than other luxury wagons, including the Audi A4 Avant and Cadillac CTS Sport Wagon, but pricier than the Volkswagen Jetta SportWagon. 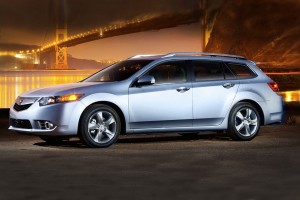 I really like the 2014 Acura TSX Sport Wagon, enough that I have given serious thought to buying one. It has the room my wife and I need with the sporty road manners we like, and it bolsters my argument that station wagons make the best family cars. Forgive me, Mom.

Drives enough like a sports car to let me forget about the two kids in the back seat, at least until they start throwing up

Styling. It's so not the station wagon!

The dashboard is too busy. Anything with this many buttons should come with a twelve-year-old to program it for you