Acura’s mid-level TL sedan is great to drive, but lacks the advanced features found in the competition.

This review would be a lot easier to write if I didn’t have kids. As parents, it’s in our nature to comfort our children when they don’t succeed — to hold them close and say “It’s okay, sweetie, you did the best you could, and that’s what counts. You’ll do even better next time.”

That’s how I feel about the Acura TL. As a parent, I want to throw my arms around the TL and tell it that I’m so proud of it, and that I know it’s trying its best. But as a car critic, I have to tell you what I couldn’t tell the TL face-to-face: For $40,000, I don’t think it’s good enough.

A lot of my sympathy stems from the Acura TL not getting off on the right foot with the buying public. When the TL was introduced in 2009, the giant chrome grille was considered so ugly that many dealerships painted it body-color in order to increase the car’s curb appeal. Acura gave the TL a thorough nip-and-tuck last year, with changes that make the nose and rear end look smaller. It worked — so much so that I considered calling Acura and asking if they could do the same thing to me.

This is where I have my biggest problem with the Acura TL. To me, the interior is the single most important part of a luxury car. If you can afford to drop 40 grand on your wheels, the cabin in which you sit every day ought to reflect that. I don’t think the TL offers that level of luxury. There’s just too much dark plastic, and the disharmonious array of swoopy lines and curvy shapes looks like it was designed by someone with a behavioral disorder. I get anxious just looking at pictures of it. And the stereo, navigation and climate controls are enough to send me straight to the asylum: I’ve seen nuclear power plant control rooms with fewer buttons. (For the record, the last nuclear power plant control room I saw was when I watched The China Syndrome.)

The Acura TL has a spacious back seat, and easy-to-clean leather comes standard. But the trunk is oddly shaped and very small — in fact, at 13.1 cubic feet, it’s not much bigger than the Honda Civic‘s trunk. If you have a bulky baby stroller or if your kid is an aspiring tuba player, the TL won’t fit the bill.

In terms of passive safety equipment, the Acura TL has the basics: Six airbags, antilock brakes, and stability control. That’s enough to score top ratings in the Insurance Institute for Highway Safety’s front, side rear and rollover impacts, which earned the TL a Top Safety Pick award. The TL also got the best-possible rating in the IIHS’s tough new “small overlap” front crash test, although the TL only gets four out of five stars in the government’s crash tests.

More important is the optional SH-AWD all-wheel-drive system, which gives extra traction and control in bad weather. The Acura TL also offers a blind-spot warning system, but it’s only available as part of a pricey option package.

Acura’s tagline is “Advance”, but there aren’t many advanced gizmos to be found. The TL’s star player is its optional navigation system, which has a high-res screen and offers real-time traffic and weather information. Nice, but the system has a dial interface instead of a touch-screen, which I find slow and awkward to program. There’s also a voice-recognition system, but it listens about as well as my fifteen-year-old son. The TL’s competitors offer features like rain-sensing wipers, headlights that turn with the steering wheel, and adaptive cruise control, but none of these nice-to-haves can be found on the TL. Clearly, the TL has only “advanced” to about 2006.

This is one place where the TL really does excel: It’s fantastic to drive. Front-wheel-drive TLs get a 280 horsepower 3.5 liter V6, while the SH-AWD gets extra power (a 305 hp 3.7 liter V6) to offset the weight of the all-wheel-drive system. A 6-speed automatic transmission comes standard, but the SH-AWD model can be had with a lovely 6-speed manual. Front-wheel-drive TLs get particularly good fuel economy for such a big car — 20 MPG city/29 MPG highway — while the SH-AWD trails a bit at 18/26, and both models require premium fuel.

Out on a curvy road, the TL has the precision of a brain surgeon. A skilled driver can carve a perfect line and jump on the power at the apex, with the SH-AWD system delivering power to the rear-outside wheel for maximum corner-exit speeds. If your eyes glazed over while reading that last sentence, you’ll understand why the TL’s superior handling doesn’t count for much in my book. Don’t get me wrong; I love how well the TL drives, and I respect the massive engineering brainpower that went into it. I just wish they’d put that much effort into the interior.

TL pricing starts at $36,800, not a bad deal for a car with dual-zone climate control, genuine leather upholstery, and a sharp-sounding stereo. But once you start adding options, the value equation crumbles like stale carrot cake.

All-wheel-drive costs an extra $3,550.The Technology Package, which adds navigation, a rear-view camera, a better stereo and nicer leather, costs $3,730.

And the Advance Package, with heated and cooled front seats, a blind-spot warning system, bigger wheels and better tires, adds $2,200 on top of that.

Opt for everything, and you're looking at nearly $46,000 -- less than a similarly-equipped Mercedes, but quite a bit more than a loaded Infiniti G37x. 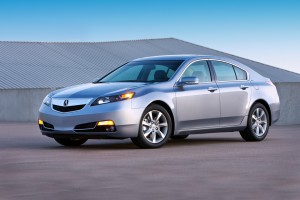 I really do love the things the Acura TL does well; it's an outstanding car to drive and it feels like it was built to last until the sun falls out of the sky. But the TL is supposed to be an advanced luxury car, and it is neither advanced enough nor luxurious enough for the prices Acura is charging. It's a good effort, but not good enough. Big hug, TL. I'm sure you'll do better next time.

One Response to “Acura TL”