Once known only for its cheap price, today’s Accent is stylish, practical, and loaded with value.

The Hyundai Accent, like the pit bull, is tragically misunderstood. People think that pit bulls are vicious and bloodthirsty, when in fact a properly-bred and properly-trained pit bull is a warm, loving, and family-friendly dog. Likewise, many people think that the Hyundai Accent is a cheap, chintzy substitute for a real car, when in fact… well, actually, that used to be true. For years, the Accent made its name as America’s least-expensive car, but those days are gone — the Accent received a complete re-do last year, in which it threw off the shackles of its sale price and joined the mainstream.

Let’s start with the styling, something I don’t normally comment on, because I have about as much aesthetic sense as the committee that designs McDonald’s uniforms. But even a fashion failure like me can appreciate the new Accent, which wears a scaled-down version of the styling seen on other new-age Hyundais like the Sonata and Elantra — and it’s as cute as a pup

Cheap-looking interiors are a pet peeve of mine. The way I see it, the interior is the part of the car we look at the most, and it had better darn well be good. Hyundai apparently agrees, as the Accent’s cabin is finished as nicely as their more expensive cars. The dashboard design is attractive and modern, and the controls are as simple to use as a shovel: Three dials for the air conditioner and big, clearly labeled buttons on the stereo, which contribute to distraction-free driving. But visibility could be better; the 2013 Hyundai Accent is offered as either a sedan or a hatchback, and both give their drivers a pinched view of the world behind.

Small cars are becoming more and more family-friendly, and the Accent gleefully follows this trend. Both sedan and hatchback versions have more legroom than most other subcompacts, but if you’re at the extreme ends of the kid-parenting scale — babies or high-schoolers — I’d take the hatchback. It’s got about half an inch more headroom and taller doors, so tall kids won’t clunk their heads getting in, and neither will you as you maneuver Baby VroomGirl into her car seat. Both cars have lots of room for strollers, baby bags, and dog beds; the sedan has 13.7 cubic foot of trunk space, which amounts to decent space for groceries, luggage and sports equipment – as much as many mid-size cars – while the Hyundai Accent hatchback’s 21.2 cubic foot cargo bay is better than all of its competitors, even the Honda Fit.

The 2013 Hyundai Accent comes standard with six airbags, antilock brakes, and electronic stability control. But unlike a pit bull, the Accent doesn’t do the best job of protecting its owners. The Accent achieved the best-possible score (“Good”) in the Insurance Institute for Highway Safety’s front, rear, and roof-crush tests, but only the second-highest grade (“Acceptable”) for the side-impact test. The Accent certainly isn’t the first small car not to ace its crash tests, but most of the Accent’s competitors scored “Good” for side impact and “Acceptable” for roof-crush, and several — including the Ford Fiesta, Fiat 500, and Chevrolet Sonic — got perfect scores in all of the tests.

The Hyundai Accent’s gadget count is pretty low; the fanciest bit of kit you’ll find is an optional Bluetooth hands-free speakerphone. That doesn’t mean it’s a low-tech car, however; Hyundai has focused the Accent’s tech spending on fuel economy. The engine uses a direct fuel injection system, a pricey means of delivering gasoline that yields higher fuel economy and lower emissions. It’s a rare find in a small, inexpensive car. And both manual and automatic Accents get modern six-speed transmissions, whereas many of the Accent’s competitors get older, low-tech five-speed transmissions that are cheaper to produce with inferior fuel economy.

Hyundai made headlines in 2012 when it was announced that they had miscalculated the MPG ratings on several of their cars. Once advertised at 30 MPG city and 40 MPG highway, the Accent was corrected to 28 MPG city and 37 MPG highway — not bad, but not quite best-in-class. That fuel economy comes through careful tuning of the Accent’s 138 horsepower 1.6 liter engine, which makes the Accent quick enough for short freeway on-ramps, but not particularly fast. The Accent’s ride is comfortable and the handling is good enough for a sudden swerve, but I wasn’t crazy about the steering — it felt great in the curves, but required constant small corrections on straight freeways.


The Accent used to be one of the least-expensive cars you can buy, but for 2013, Hyundai has eliminated the cheap-and-cheerful stripped down model -- all Accents now come with the creature comforts most buyers demand.

Accent GS: $15,570 The hatchback version of the GLS. All the same standard equipment plus a rear wiper. Automatics cost $1,200 extra and include cruise control. 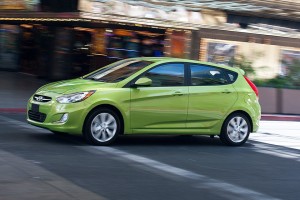 With all the changes to the Accent, I was hoping that the public perception of this car would turn around, and the world would come running to it like a pit bull to her supper. But the 2013 Hyundai Accent faces some tough competition: The value-laden Nissan Versa, the versatile Honda Fit, the easy-to-park Toyota Yaris, and the cheeky, cheerful Ford Fiesta, all of which are competitively priced. The Accent is a very good car; I especially like the styling and the space, and the long warranty (5 years/60,000 miles on the whole car, 10 years/100,000 miles on the engine, transmission, and bits that make the wheels turn) means it'll be a long and loyal companion, just like a certain misunderstood breed of dog. Still, with so many good alternatives out there, the Accent -- like the pit bull -- may have a tough time winning new fans.

One Response to “Hyundai Accent”