You just can’t be in a bad mood while driving the uber-cheerful 2013 Volkswagen Beetle Convertible. Just try, we dare you.

Fun is a standard feature on the new Volkswagen Beetle Convertible. In fact, it’s the whole point of the car’s being. Ever since 1949, when the first bug landed on American shores, drivers of the iconic “people’s car” have embraced the little round vehicle with a wink and a nod. The 2013 VW Beetle Convertible is all new, with a more traditional shape that is longer, wider and sportier than the previous model. It’s top-down sunshine fun, and it comes in three engine types for three styles of driving. It’s also priced right, starting at $24,995.

The 2013 Volkswagen Beetle Convertible carries the exuberance inside. The car’s exterior color is mirrored on interior surfaces, so there’s a cohesive look and a bright, happy demeanor from the colorful paint job. The little bug seats four comfortably, with three more inches of rear-seat legroom than the previous generation. It is a bit tight fitting in the backseat in the shoulder area when two large adults are back there – not horribly, but certainly a bit cozy. Backseat riders are deprived of A/C vents, which is a bummer. Why shouldn’t backseat passengers get a little air conditioning when the top is up? But they do get one cup holder to fight over, as well as a 12V charging outlet.

Backseat slight aside, standard creature comforts abound, with heated front seats, Bluetooth connectivity, a multi-function leather-wrapped steering wheel with audio buttons, cruise control, and on-board computer info, like current average MPG and fuel mileage range. The soft-cloth black top goes up and down in under 10 seconds, and unlike some other convertible brands, the VW Beetle’s top can be put up or down while the car is moving at up to 31 mph. The rear glass window is heated to repel frost.

The 2013 VW Beetle Convertible comes with leatherette, which, of course, is vinyl. But it’s a very pleasant-feeling and great-looking material that has the appearance of sport leather. The cabin is illuminated at night by a three-color ambient lighting system that’s as pretty to look at as it is useful. And there are two glove boxes instead of one. The VW Beetle Convertible’s seats are nicely bolstered for great torso support, and we were quite comfy on our test drive.

If you’re a nervous Nelly about driving a convertible, fret not. The 2013 Volkswagen Beetle Convertible comes with two roll bars that are hidden behind the backseat headrests. Should the vehicle leave pavement, the roll bars pop out at lightening speed.

The 2013 VW Beetle Convertible comes in three engine types, and with prices to fit most budgets. The base model’s 2.5L, 5-cylinder, 170 horsepower engine is perfectly adequate in city and highway driving. It won’t win any races, but it’s certainly quick enough to safely merge onto highways. A zippier 2.0L, 4-cylinder, 200 hp turbo model is a bit more satisfying in the sporty department. But my personal fave is the 2.0L TDI (turbo diesel), 140 hp model that has power at any speed. The diesel engine gets great fuel economy, with VW claiming up to 41 mpg on the highway. In my day-long test drive, I was easily able to achieve 36 mpg without changing my rather lead-foot driving style. The base model and turbo models come with standard automatic transmission. The 2.0L TDI version comes standard with a six-speed manual transmission or an optional DSG automatic transmission.

We had a blast tooling about Los Angeles topless. An optional windscreen that fits just behind the front seat headrests works wonders at keeping wind out of the cabin. My hair barely moved while driving along the windy coast, and it was easy to keep a conversation going. With the top up, the cabin is surprisingly quiet, with wind and road noise non-existent. The soft top is very well soundproofed.

Buyers of the 2013 Volkswagen Beetle Convertible aren’t choosing it for the latest tech wizardry. That’s because it’s not really a techie mobile. Sure, it has a good navigation system, with voice command, a good sound system, and Bluetooth connectivity for hands-free phone use. But unlike other makes, this VW can’t list the latest movies, let you check Facebook, or make a dinner reservation for you. But honestly, who cares? That’s what your mobile phone is for. And Beetle lovers tend to be romantics at heart, which somehow doesn’t mesh with too much techie stuff.

2.0L TDI: $27,895 manual transmission, as well as all the standard features of the base model. 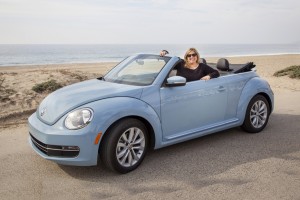 I still can't wipe the grin off my face. The 2013 Volkswagen Beetle Convertible delivers joy and good will in a package that seems quite well built. It's the people mover for those who don't take themselves too seriously.