When I first saw the new Ford Fusion in person, I wasn’t sure if I should take it for a drive or check its finger for a wedding ring and ask it out to dinner. I was absolutely smitten by the Fusion’s appearance, and that’s a real problem — after all, this isn’t some slick two-seat sports car where style matters more than substance. The Fusion is supposed to be a sensible family sedan, and as anyone who has ever had too much to drink on vacation will tell you, falling hard for a handsome face is never a good idea.

As it turns out, the Ford Fusion’s charms go way beyond the physical; there are plenty of reasons to like it besides the sinewy body. The Fusion is roomy, practical, and a delight to drive — so if, like me, you are taken by its looks, don’t worry. After all, if your husband/boyfriend/girlfriend/life-partner is kind, caring and sensitive, does it really hurt anything if he (or she) is an absolute hunk?

world sensibility carries over into the cabin, which is made up of top-quality materials and sensibly-laid-out buttons and switches for windows, door locks, etc. It’s the same ambiance you’d expect to find in a BMW or an Audi — a real treat in an American car.

Top-end Fusions get Ford’s MyFord Touch system, which uses a big color touch screen and a touch-sensitive panel to control the stereo, air conditioning, and navigation systems. It looks slick in the showroom, but out on the road it makes simple tasks like changing the radio station into a complicated ritual. I prefer the old-fashioned buttons in less-expensive versions of the Fusion.

This is the Ford Fusion’s saving grace: It makes an outstanding family car, with a generous back seat that will accommodate kids from cradle to college (and impress picky in-laws as well). The trunk holds 16 cubic feet, which translates to plenty of space for strollers and suitcases. Hybrid versions of the Fusion (yes, you can get it as a hybrid!) lose 4 cubic feet to the battery pack, but Ford has arranged the intrusion as a shelf, so there’s still plenty of usable space.

The Ford Fusion comes with eight airbags — the usual six (two in front, two in the front seats, and two curtain airbags that cover the side windows), plus two that protect the driver and front passenger’s knees. The Fusion had not been crash-tested by the government at the time of writing, but it scored perfect marks in the Insurance Institute of Highway Safety’s front, side, rear, and roof-crush tests, earning it a Best Safety Pick award.

The Fusion was bred for narrow, twisty European roads, so its handling is top notch, with responsive steering, a firm ride, and a confident, road-hugging feel. The Fusion offers a broad choice of engines, starting with a 175 horsepower 2.5 liter four-cylinder. In my opinion, the engine to have is the next one up — the 1.6 EcoBoost, a small high-tech engine that delivers similar power to the 2.5 liter engine (178 hp) with better fuel economy (23 MPG city/36 MPG highway, compared to 22/34 for the 2.5). The 1.6 EcoBoost is available with an optional gas-saving auto-stop feature that shuts the engine off at stoplights, saving fuel for city drivers. It’s also the only engine offered with a manual transmission, and if you enjoy driving a stick-shift, this one is an absolute delight.

Instead of a V6, the Ford Fusion offers another turbocharged option, the 2.0 liter EcoBoost four-cylinder, which puts out a strong 240 horsepower and is rated at 22 MPG city and 33 MPG highway. And for the greenest among us, there’s the Fusion Hybrid, which delivers rapid battery-boosted acceleration and EPA ratings of 47 MPG city/44 MPG highway. (I got 42 MPG during my brief test loop, pretty impressive for a car of this size.) All of the Fusion’s engines drive the front wheels, but if you pop for the top-of-the-line Titanium version, you can get the 2-liter EcoBoost engine with all-wheel-drive, a great idea if you live where it snows.

little too complex for my tastes; unfortunately, if you want a built-in navigation system (and Ford’s is excellent), you have no other choice. The good news is that the Fusion’s SYNC voice-recognition system is excellent, and even if you skip MyFord Touch and navigation, you can still use SYNC to control your phone, the stereo, and even your iPod.

If parallel parking gives you the heebie-jeebies, then you’ll like the Fusion’s optional Active Park Assist, available in the Titanium model. Press a single button and Active Park Assist uses sonar to look for a parking spot big enough for the Fusion. Once it does, you just stop the car, shift into reverse and take your hands off the wheel, and while you work the gas and the brake, the Ford Fusion will deftly steer itself into the spot for a ten-point parking job. (If nothing else, it’s worth a trip to your Ford dealer just to see the self-parking system in action.) 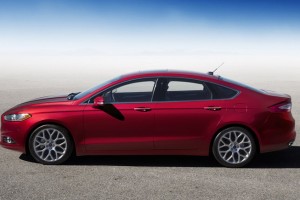 The new Ford Fusion almost seems to good to be true. It's pretty on the outside and roomy on the inside, wonderful to drive, and offers a broad variety of engines and options. The only catch is the pricing -- low end models are a little light on equipment compared to Japanese rivals like the Honda Accord and Nissan Altima, while high-end models rival Germany's Volkswagen Passat, which I consider to be one of the best mid-size cars on the market. And while the Accord, Altima and Passat are all built in the United States, the Fusion's production is split between Detroit and Mexico. Still, one can argue that the Fusion is worth the price -- it sits right on the cutting edge in terms of styling, technology and gadgets. I love it... and not just for its body!

Family Friendly
Fun
Made In America