It spent more than 600 hours in the wind tunnel to ensure the 2013 Dodge Dart’s aerodynamic design lives up to its name. It also offers the trifecta of first car ownership: value, safety and fuel efficiency.

One of my college friends drove a maroon Dodge Dart hand-me-down that was well into six digit mileage on its odometer. The paint was faded, a couple of dings on it, but it did the job. My friend kept wishing for it to die so he could get something sportier, but “the damn Dart” just kept running. His was one of the 3.4 million Darts sold during its first life. No wonder Dodge is bringing it back.

The Dart’s re-entry into the sedan-osphere 35 years later comes with new DNA from the award-winning Alfa Romeo Guilietta, and the company’s new lifeline, Fiat, which now owns the Dodge brand and its parent company, Chrysler. Sporty and loaded with safety features, the 2013 Dodge Dart is highly customizable, including three different engines, 12 exterior colors, 14 interior color and trim combinations, six wheel options and three transmission options. Buying the 2013 Dodge Dart will be like ordering a sandwich at the deli with all the possible combinations. Those looking for the reliability and safety of the old Dodge Dart, and a new sportiness and color choices to rival O.P.I., should take a look at the 2013 Dodge Dart. I’ll have to notify my college pal.

The interior is surprisingly spacious for what looks like a compact car. There is plenty of legroom in the back for teenagers, whether they are your friends or your kids. Back seats fold down, but the trunk opening limits what you can actually get into that space. Storage space in the Dart is very good, even clever. There is the expected storage between the two front seats, but unexpected is the hidden (and lighted) USB port with iPod control inside. The Dart also offers unexpected storage space, too. The glove box is cavernous – I mean, I reached in and kept reaching until I thought I might touch the radiator! Longest glove box I’ve ever stuck my arm in. Another unexpected storage space is in the front passenger seat. Throw in your MP3, battery chargers, CDs or other valuables and it’s hidden from thieves. Plus, your passenger will never know she is incubating your valuables.

Another feature that will fascinate the first car owner is the 2013 Dodge Dart’s ruby red LED light pipe that glows while surrounding the instrument panel. It’s similar to the one that wraps around the tail lamps.

All controls are within easy reach and readable without ducking and weaving your head. The instruments are available in analog or digital. The multi-directional adjustable driver seat and telescoping steering wheel make it easy to personalize your ride and the 8.4-inch Uconnect Touch Media Center may at first be daunting, but is easy to navigate.

The materials – the plastics, mainly, are easily scratched and somewhat ordinary. However, it can be overlooked by the time you design your car from the 100,000 fabric/color/materials possibilities.

I drove the 6-speed SXT. The shifting was smooth, but the gearshift knob felt a little large for my hand. All that time in the wind tunnel produced a very quiet ride – at least for the wind. But I was distracted by the sound of the loud engine, which seemed to work hard without getting much. The 1.4 liter, 160 horsepower engine is not as spunky as I would like, but once it gets going, it’s fine. It held well in the tight curves and braking was strong. My mpg came in at 27.7, which is right on target for city driving. A special aerodynamic package can be purchased that brings gas mileage up to 41 mpg highway.

With 10 airbags surrounding you and your precious cargo, and more than 60 available safety and security features, including a back-up camera, four-wheel anti-lock disc brakes, third window instead of blind spot, lock-on-sync tire pressure monitor, Lower Anchors and Tethers for Children (LATCH) in all three rear seat positions, the 2013 Dodge Dart could quite possibly be considered the panic room of vehicles.

The 2013 Dodge Dart has plenty of technology to keep techies entertained. It offers the largest touch screen radio in its class, which also makes it the largest back-up screen; the full-color instrument panel is easy to read and use and can be reconfigured to the driver’s fancy; and . Heated steering wheels, Uconnect Voice Command with Bluetooth, integrated Gracenote database which identifies music on portable devices, Sirius XM Satellite radio, dual-zone climate controls, Garmin GPS and blind spot monitoring are all available. 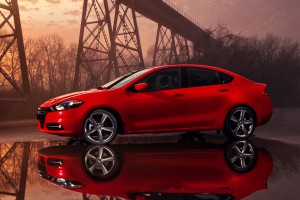 The 2013 Dodge Dart will appeal to a young driver or first-time car buyer. However, it offers enough grown up features for drivers who are looking to downsize yet still maintain a bit of sportiness.

The hidden storage in the passenger seat is brilliant.

I always like colors and options and the 2013 Dodge Dart appeals to the artist inside me.

The trunk opening is too small to fit what the interior of the car could easily handle.