Need seating for seven, but don’t want to give up your luxury car? Chrysler thinks they have the answer with the Town & Country minivan.

When it comes to minivans, we are a country divided. I know women who think minivans are the best thing to happen to child-rearing since the epidural, and others who would rather have hourly pap smears than drive one. Whatever the thinking, the Chrysler Town & Country is seeking to make life with a van more pleasant. Essentially a Dodge Grand Caravan in formal evening wear, the T&C is America’s only luxury-branded minivan. It comes festooned with leather and power-operated features galore, and carries a surprisingly reasonable price tag.

Although the Chrysler Town & Country comes with standard leather upholstery — which is both luxurious and practical, as it’s easier to clean than cloth — the rest of the cabin is actually not much different than the Dodge Grand Caravan. There’s a bit more chrome and wood trim, an analog clock on the dash, and a unique set of gauges, which I found harder to read than those in the Dodge. My top-of-the-line Chrysler Town & Country Limited had a heated leather-and-wood steering wheel; the rim was as thick as my forearm, and I had trouble wrapping my dainty little fingers around it.

So a Lexus this ain’t — but Chrysler has been in the minivan business longer than anyone, and they know a thing or two about what parents need. That’s why you’ll find enough storage cubbies to transport a battalion of action figures and enough cupholders to hydrate the city of Boston. I particularly liked the “conversation mirror” — a small convex mirror above the rear-view that lets us parents perpetuate the notion that we have eyes in the back of our heads.

The T&C has seven adult-sized seats in a 2-2-3 seating layout. The second row features Chrysler’s “Stow-N-Go” seating, in which the seats can be easily folded flat into deep storage wells in the floor. (If you’ve ever tried to wrestle the seats out of a minivan, you’ll know what a boon this is.) Some customers complained that the Stow and Go seats weren’t comfortable enough, so Chrysler offers bigger, removable seats as an option. Stow-n-go or no, all T&Cs have deep under-floor storage wells which are perfect for wet umbrellas, snowy boots, or illicit narcotics. The third row seats can be folded backwards into its own storage well, leaving a flat cargo floor. My test van had an optional power-operated third row that folded itself. And all Town & Countrys come with power-operated sliding doors and tailgate, so you can unlock and open the van using buttons on the key fob.

Parents tend to be extra-careful drivers, so it’s no surprise that, statistically, minivans are among the safest cars on the road. That hasn’t stopped Chrysler from equipping the Chrysler Town & Country with electronic stability control and six airbags. Most of the protection goes to the front occupants, but all three rows are protected by side-curtain airbags that cover the windows. With its high-strength body structure, the Town & Country scored the highest ratings in the Insurance Institute for Highway Safety’s front, side and rear impact tests. (IIHS has not tested rollover or roof-crush, so the Town & Country is not eligible for their Top Safety Pick award.) And the T&C is available with active safety features such as a blind-spot warning system and Rear Cross Path detection, which can warn you of oncoming cars as you back out of a parking spot.

To Chrysler, luxury means not having to lift a finger, so the Chrysler Town & Country gets power-operated sliding doors, a power-operated tailgate, power-adjustable front seats, and an optional power-folding third-row seat. There’s even an optional remote starter, so you can have the interior warmed up (or cooled down) before you set foot inside. Other nice-to-have features include a rear-view camera, Bluetooth phone, a navigation system, and a rear-seat entertainment system that features a BluRay player and an HDMI input jack (the one that high-octane video game systems use). My test van had a dealer-installed mobile internet package, which turned the van into a WiFi hot spot with 4G internet access. Still, the T&C lacks driver-centered features like headlights that steer with the wheels or rain-sensing wipers.

The Chrysler Town & Country is powered by a 280 horsepower 3.6 liter engine with a 6-speed automatic transmission. Power is perfectly adequate, although my test van vibrated annoyingly at idle. EPA fuel economy estimates are 17 MPG city/25 MPG highway, similar to other minivans. Unfortunately, the T&C drives like the bus that it is — it feels heavy and a bit ponderous, although it can swerve quickly enough when it has to. On the plus side, it’s quiet and relaxing, just as a luxury vehicle should be.

The Town & Country starts at $31,390 for the Touring model, which includes leather-trimmed seats, power doors and tailgate, alloy wheels, and a stereo with 30 GB music server. That's a very good price — a comparably equipped Honda Odyssey or Toyota Sienna will run you $4,000 to $5,000 more.

Other trim levels include the Touring-L and Limited, which add features such as automatic headlights, heated seats and steering wheel, and Nappa leather upholstery. My test vehicle was a decked-out Limited with every available option except the $895 trailer towing package; it listed for $44,155, significantly less than top-of-the-line minivans from Honda, Nissan and Toyota. 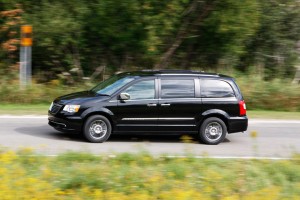 As a long-time parent and veteran minivan owner, I like the idea of a luxury van. That said, I think the Nissan Quest does a better job than the T&C for ambiance, although its rear seats aren't as comfortable. And the Town & Country is one heck of a bargain — even with all the luxury doo-dads (or doo-moms), it's still less expensive than most vans. (If you're not one for gizmos and gadgets, check out the Dodge Caravan: Same vehicle, same engine, lower price.) The Chrysler Town & Country may not make minivan ownership any more palatable, but it does make it more rewarding.

Excellent value-for-money; storage space galore; feels like it was designed by people who have kids.