Imagine spending more money on gasoline for your lawnmower than you do for your car. With the Chevrolet Volt, that’s a real possibility — but unlike other electric cars, the Volt isn’t tethered to its plug.

The Chevrolet Volt is a revolutionary vehicle. It is a battery-powered electric car in which you don’t have to worry about running out of electricity. Here’s how it works: At night, you plug the Chevy Volt into its charger. In the morning, it’s ready for about 38 electric-powered, gasoline-free miles. Let’s say you drive the kids 3 miles to school, then go 9 more miles to work. You take a 4 mile round trip at lunchtime to eat and run some errands, then back to the kids’ school and home again, with a 2-mile diversion to the grocery store. You know how much gasoline the Chevrolet Volt will use? None. Not one single drop.

Any electric car can do that — but what happens when something comes up, like a mid-day doctor’s appointment in the next county? That’s where the Chevrolet Volt’s true brilliance shows itself. If the battery runs low, the Volt automatically starts up its little gasoline engine and begins generating its own electricity — about 300 miles’ worth. Plug it in or fill it up; with a Volt, the choice is yours.

Why did General Motors give the Chevrolet Volt a 38 mile electric-only range, when other electric cars go 75 to 150 miles? Because the average American drives about 33 miles per day. So if you have a set routine, and if you fall right around the average, you may well spend more on gasoline for your lawnmower than you will for your Volt. And even if you’re a 50-mile-per-day driver, your Chevy Volt will still use far less fuel than a traditional car or hybrid.

Space inside the Chevrolet Volt is a bit tight. The Volt’s battery pack lives in a tunnel that runs down the center of the car, which limits the width of the seats, and if you share my love for burgers and cheesecake, you might find the seats a bit constricting. It’s a similar deal for the rear seating, which is both narrow and lacking in headroom, a limit of the Volt’s aerodynamic shape. The trunk is small (10.6 cubic feet) but it’s boxy and free of obtrusions, so it’s great for grocery bags or valises.

The controls are downright futuristic: There’s an LCD monitor in place of a dashboard, an LCD touch-screen for the stereo and navigation, and touch-sensitive panels instead of traditional buttons for the stereo and climate control system. This seems like a cool idea until you or your passenger accidentally brushes a hand against the panel and turns the stereo up or the A/C down. Nifty though the touch-panel is, I’d rather have old-fashioned buttons.

The Chevrolet Volt comes with much of the same safety equipment found in a traditional car: Eight airbags (including two that protect the front seat occupants’ knees), antilock brakes, and electronic stability control, with a backup camera, lane-departure and front-collision warning systems on the option list. The Volt had perfect scores in the Insurance Institute for Highway Safety’s front, rear, side and roof-crush tests, earning it a Best Safety Pick award.

Because the Chevy Volt uses an electric motor to turn the drive wheels, it feels completely different than a traditional engine-powered car. Gasoline and diesel engines develop different amounts of power depending on how fast they are spinning, but electric motors can produce 100% of their power at any speed. Stepping on the Volt’s accelerator brings a smooth, seamless rush of power, not unlike a jetliner taking off. It’s as close to a magic carpet ride as you’ll get in an automobile.

That smooth, even power delivery doesn’t change even when the gasoline engine starts, because the engine is used primarily* to charge the battery; the electric motor still delivers power to the wheels. Running on gasoline power, the Chevrolet Volt gets around 35 MPG, although it does require premium fuel.

* Geek moment: At highway speeds, the Chevrolet Volt actually allows the gasoline engine to feed a small amount of mechanical power into the driveline as it generates electricity, which the engineering boffins say is the most energy-efficient way to power the car.

Pricing for the Volt starts at $39,995, which includes five years of OnStar with turn-by-turn directions. But with options — including leather seats, nicer wheels, navigation, a Bose stereo, and a rear view camera — rises as high as $44,265. That sounds like a lot — well, it is a lot — but bear in mind that buying a Volt qualifies you for a one-time $7,500 Federal tax credit. (That's not a deduction, it's $7,500 off the tax you owe.) Several states offer additional incentives. And while the Volt can be slow-charged off a 110 volt household outlet, buyers will probably want a charger, which costs around $2,000 installed.

So the bottom line is that a Volt will cost you around $35,000 to buy. That's a lot down for a relatively small car, and at current gas prices, it will take several years of driving to make up the cost difference in fuel savings. But that's no reason to stay away: Our fuel supplies aren't infinite, and Volt owners will be doing more than their share to reduce our country's dependence on oil. 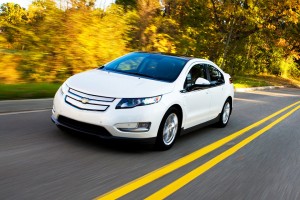 If you are a driver of regular habits, buying a Chevrolet Volt could well cut your fuel costs down to nearly nothing — and unlike a pure electric car, you never need worry about sudden emergencies or spontaneous trips to Las Vegas. But if you fall well outside of the 33-mile-per-day average, or if you take frequent road trips, you'll probably use less fuel with a hybrid car like the Toyota Prius or the Volkswagen Jetta Hybrid.

All the benefits of an electric car without having to worry about range.

Electric motor makes for a smooth, seamless and quiet drive.

One Response to “Chevrolet Volt”