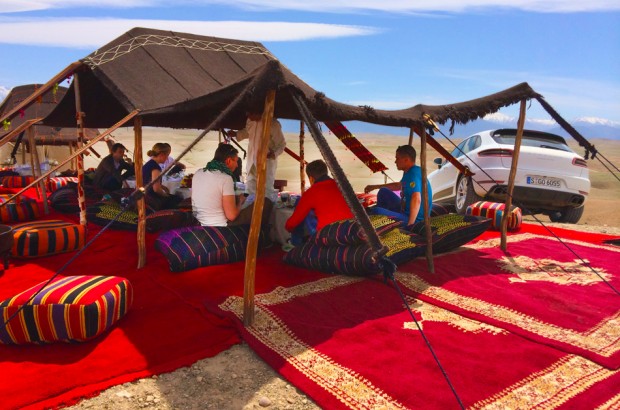 Porsche Macan And The Year Of The Tiger

When Porsche wanted a small group of automotive journalists to test its new Porsche Macan compact SUV, the company brought us to an exotic land that is at once stunningly beautiful and unforgiving: Marrakech, Morocco.

Here, on steep desolate dirt mountain roads and mogul-like sand dunes, Porsche’s newest model, the Macan, revealed itself to be exceptional in every way.

In A Blaze Of Color

The juxtapositions outside our car window flashed like a fever dream. Glints of hot turquoise, brilliant fuscia and neon orange – the exuberantly hued robes worn by Arab women. A man in a floor-length caftan, riding sidesaddle on a donkey. The beast pulling a The scrappy little hatchback grows up and gets sedan proportions and four doors. Perfect for singles and young families. cart held together with straps of palm fronds and loaded down with twigs that would be used to build a fire that night. And then there were the scores of high-pitched scooters whizzing by in a warped blur. Just a cacophony of urban chaos: engines, horns, and too, the loudspeaker calls to daily prayers.

Not in Kansas anymore.

None of it seemed congruent with the task at hand – to test drive and evaluate for VroomGirls the all-new 2014 Porsche Macan compact SUV…on the streets and outskirts of Marrakech, Morocco. A European luxury vehicle, made by some of the most sophisticated automotive engineers on Earth, and planted squarely in an environment that clings to its very ancient past. A place where Berbers from Jesus’ time could simply step onto a contemporary Marrakech street and, ignoring the clunker cars and scooters, feel at home. At once, a clash of modern – the Porsche – and the ancient – everything in Marrakech. How ideal.

My driving partner and I (I’ll get to her later) set out from our luxe digs, La Mamounia, a wonderfully posh resort behind tall walls in the heart of the old city. We headed for the foothills of the Atlas Mountains, about 90 miles away. From the moment we merged onto city streets, Marrakech felt like a video game. “Grand Theft Auto”? No. More like “Crazy Taxi.” Pedestrians and scooters darted in front of our Porsche Macan from out of nowhere. I’d slam on the brakes…great job, Porsche. They’re as sharp as a Moroccan saber. And then back on the gas pedal to high tail it out of town.

For the Porsche, it was just another day on the job. The Macan’s (rhymes with pecan) handling is uncompromising, it’s steering is exact, and it’s comfort, well, that’s as wonderful as the plush cushions upon which we lounged underneath a Berber tent for a lunch break. After a traditional Moroccan meal – grilled lamb and chicken, tagines filled with colorful stewed vegetables, and aromatic tea, we galavanted up and over rolling hills of desert sand. Dust flying everywhere, and the blue sky big and wide over the plains laid out in front of the Atlas peaks. For most vehicles, the punishing terrain would have been a challenge, but Porsche made certain the Macan was at home on such footing.
—

Pardon me, But can we pass you and your mule?

The next day, my driving pal, a delightful young writer from Town & Country magazine, and I joined the group on a trek to Bertnaten, a village of mud and hay adobe homes, set into the foothills of the Atlas range. Since owning a Porsche should be an exotic experience, this seemed a fitting setting.

We parked our now dusty Porsche Macans along a narrow dirt road and climbed up a ladder, onto the roof of an adobe home. Our Porsche hosts had decorated the rooftop with Moroccan rugs. We ate a boxed lunch from the hotel, and were served aromatic tea from a bronze kettle poured by a man in a fez. Seriously. Really?!

My auto writer colleagues and I savored the view: an unadulterated view of the snow-peaked Atlas mountains and green foothills. Along the slopes, sheep and goats grazed. Children played in the village streets, but mostly stared at the Americans who had blown into town in luxury SUVs.

It was time to leave, and I hopped into my Porsche Macan for the drive back to the resort. Weaving down the narrow dirt path, we came upon a man on a donkey. He was sporting an earthen-colored robe, wore a fez-like cap, held a switch to goad his donkey, and moved to the steep side to let us pass. It was all so surreal. And such a phenomenal juxtaposition.

Inside the super-comfortable, super-luxurious 2014 Porsche Macan, it is easy to forget how far we come from the days when everyone rode animals as transportation. Thanks, Morocco, for helping us remember. And thanks, Porsche, for making vehicles that take us to extremes.