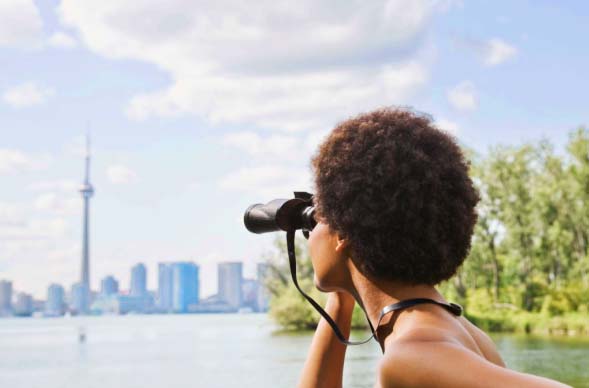 Make a Run for the Border! Three US-to-Canada Road Trips

Oft overlooked, Canada is a nearby treasure trove of open road. For a dose of cooler air and fun, we hit Quebec City, Toronto and Vancouver—all driving distance from major U.S. cities.

In cooler temperatures, the sandy lands south of the border beckon. But with the mercury reaching downright infernal heights here in the U.S., it’s far more fun to head up north. America’s less sultry neighbor–God Save the Queen!–offers plenty of paved stretches for road-tripping.   To make it easy on you, we’ve chosen three urban destinations within driving distance from U.S. cities—Quebec City, Toronto and Vancouver. Each offers an entirely different flavor of Canadian living, from the country’s French-infused old world charm to the rugged terrain of the west coast.   Rest assured, you can bring duty-free liquor home from each.

If you’re craving the café-lined boulevards of France, but not the trans-Atlantic flight, Quebec City is the next best thing—with the added bonus of less smoke and fewer roundabouts. Within the walls of the 400-year-old city, all the charm of a European city exists. Tall, stone homes are pinched among sidewalk bistros, while the romantic sounds of the French language fill the air. The city buzzes with culture, from the Marche du Vieux-Port (160 Saint-Andre Quai), a market where farmers peddle rich cheeses and fruits, to free summer evening showings of Cirque Du Soleil’s Les Chemins Invisibles (Tuesday through Saturday, under the Dufferein-Montmorency highway overpass).   Stay at the most recognizable building in the city, the castle-like Fairmont Le Château Frontenac (1 rue des Carrieeres), where sweeping river views and stately accruements only add to the ambiance. Dine finely at the city’s oldest gourmet restaurant, Le Continental (26 Rue St-Louis) or swing into the comfortable Le Petit Cochon Dingue (24 Bd Camplain) café for their renowned hot chocolate and a reasonably priced brunch.

Getting there: From Maine, Quebec City is roughly a five-hour drive along the two-lane ME-6, which turns into Autoroute 73 in Canada. You’ll pass through rural towns and soak up plenty of backcountry scenery along this slow-paced trek, before glimpsing the walls of Quebec City. When you near your destination, consider extending your ride to traverse the Route de la Nouvelle-France. It’s one of the oldest thoroughfares on the continent, giving way to heritage homes that illustrate the region’s farming history. Keep going and reward yourself with a trip to Vignoble Domaine L’Ange-Gardien, where you can partake in the winery’s acclaimed golden ice cider.

Canada’s largest city and Ontario’s capital, Toronto is a metropolis vastly underrated by most American neighbors. With a history stretching back to the late 18th century, the Toronto of today is a mishmash of different vibes. From Old Town, blanketed in Victorian architecture and quaint boutiques, to the harsher and more modern angles of the Financial District, numerous clever pockets make up the patchwork quilt of land. Squeezed in between are several noteworthy attractions that you’ve no doubt heard of, like the soaring CN Tower (301 Front Street W) with its terrifying but highly recommended Edge Walk experience. Check out the famed Toronto Zoo (361 Old Finch Ave.) and its newest addition of pretty and pale rare breed white lions.   Stay at the trendy Drake Hotel (1150 Queen Street West), where you can book a modest pied-à-terre and take advantage of the hotel’s art exhibit du jour. Since dining options in Toronto are nearly limitless, ask around for tips on your favored cuisine. Or, try the homey Black Hoof gastropub (928 Dundas Street West) for dinner, offering robust brews and flavorful cuts of meat. Round it out with a stop into Lady Marmalade (898 Queen Street East) or Crêpes à GoGo (18 Yorkville Ave.) for brunch—both offer divine menus and easily digestible prices.

Getting there: A single sinewy highway—ON 401—will take you directly to Toronto in approximately four and a half hours once you’ve driven over Detroit’s Ambassador Bridge. Or, by adding a bit of time to your trip, you can travel north of Lake Erie and plan a pit stop at Niagara Falls, a must for everyone’s bucket list.

The western hub of Canada and the jewel of British Columbia, Vancouver is a city of dreamy contrasts. For the city-loving gal there are plenty of big city skyscrapers, and certainly no lack of shopping—Metropolis at Metrotown. (604-4720 Kingsway) For the outdoorsy types, the easily accessible mountains and ocean cradle the city unlike any other in North America. From the grassy, coastal expanses of Stanley Park, with a five-and-a-half mile long seawall made for strolling, to the sporadic pop-up of street side movie sets, the city is a wonderful mix of lively and calm.   For an urban slumber, stay at the luxe Shangri-La Hotel (1128 West Georgia Street) downtown; or enjoy the region’s natural elements at the nearby seaside spa Tigh-Na-Mara (1155 Resort Drive, Parksville). Dish on the freshest seafood, naturally, at Five Sails waterfront restaurant (999 Canada Place)—a four diamond pick located in the Pan Pacific Hotel. For breakfast, duck into the tiny confines of much-loved Twisted Fork (1147 Granville Street), where rich morning entrees like banana-stuffed French toast with brioche start the day of decadently.

Getting there: From Seattle, drive toward the Peace Arch border crossing at Blaine by way of Interstate 5, then hop on Highway 99 for a direct route to Vancouver. You’ll need roughly three hours to reach the city. Since it’s a relatively short trip, keep on going toward Vancouver Island for a truly scenic weekend drive.

One Response to “Make a Run for the Border! Three US-to-Canada Road Trips”