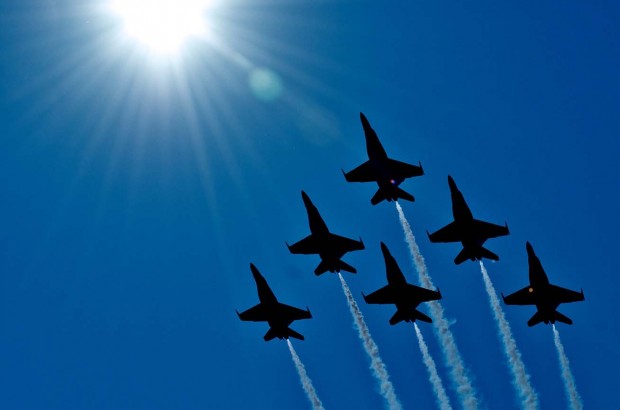 Who would you choose to design your next sports car?
A. Charlie’s Angels
B. Hell’s Angels
C. Victoria’s Secret Angels
D. The Blue Angels
We’re going to have to go with D. Nissan’s engineers are way ahead of us.

Fast is my favorite color

“I feel the need…the need for SPEED!”

Can you name that movie quote? Here’s a hint: think pilots. Navy pilots. Hot, shirtless Navy pilots, playing beach volleyball. A young Tom Cruise, pre-couch-jumping days, whose mouth was writing checks his body couldn’t cash. Of course, I speak of Top Gun. The guys were hot, but even more awe-inspiring for future Vroomgirls everywhere was the vroom of those crazy-fast fighter jets.

The movie may be a Hollywood fantasy, but those speeding F-18 planes and the pilots who fly them are quite real. So thrilling are they to watch that the Navy has an elite flight demonstration squadron, better known as the Blue Angels. Earthbound speed fans have been enthralled for 66 years watching these sleek, enormous planes pirouette and loop in the air as effortlessly as tiny Cirque Du Soleil acrobats.

So when Nissan’s engineering team was looking for inspiration, they took a road trip from their headquarters in Tennessee to the home of the Blue Angels in Pensicola, FL. According to Nissan’s Phil Lienert, the engineers weren’t actually able to fly in the planes for security reasons–bummer!–but they did get some very up close and personal views of the cockpit design.

Pretty, but can it hit Mach-5?

What new racy design implements can we hope to see in next year’s models? Since Vroomgirls has not yet been granted a top secret government security clearance, Haslam was not able to reveal any of the surprises the engineers may have in store for their designs. However, the possibility of a “blue angel blue” or afterburners on a car could neither be confirmed nor denied.

Says Nissan’s Jared Haslam, “It was beneficial not only to study the designs of the ‘Angels’ F-18s up close but to get an understanding of how pilots and service personnel interact with their jets.” This makes great design sense. After all, when you’re flying at supersonic speeds, you can’t be fiddling with awkwardly placed switches or knobs. With inspiration from the Nissan engineers, your next car’s console might feel more like a customized Navy pilot’s lair than your dad’s old Impala.

So if you’re driving along in your future ride and suddenly feel an unexplainable urge to break the sound barrier and do a double twisting loop in sync with your fellow drivers, you’ll know why. Don’t say we didn’t warn you.