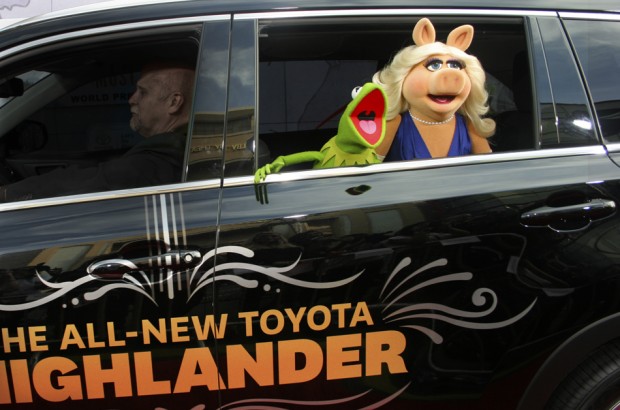 Muppets Most Wanted on the Red Carpet

It’s time to play the music! It’s time to light the lights! Kermit, Miss Piggy and the whole muppet gang are back in a new movie, Muppets Most Wanted, along with Tina Fey, Ricky Gervais, and Ty Burrell.

Kermit the Frog is famous for singing, “It’s Not Easy Being Green”. Know what else isn’t easy when you’re a three-foot-tall Muppet frog? Walking the red carpet for your big movie premiere. While co-stars Tina Fey, Ricky Gervais, and Ty Burrell have no problem walking the red carpet on their own for the world premiere of their new movie, Muppets Most Wanted, the Muppets needed a way cruise the carpet in style while waving to their throngs of adoring fans. It took two Toyota Highlanders to hold this fuzzy A-list cast. Kermit and Miss Piggy arrived first on the red carpet for Muppets Most Wanted, accompanied unbeknownst to them by Kermit’s evil froggy doppelganger, Constantin, while Animal, Gonzo, and the rest of the gang followed close behind.

Take a look at VroomGirls’s exclusive pics of this star-and-muppet-studded event!

Tina Fey was taken by surprise when asked about her passionate on-screen romance with Kermit…was it just for the cameras, or has true love blossomed??? She’s not telling!

Gonzo, Animal and the gang arrive to the premiere in their very own Toyota Highlander. Animal says,
“SUNROOF!! GOOD!!! HAHAHAHA!”

Tina Fey, Ricky Gervais, and Ty Burrell pose with Kermit and Miss Piggy in front of a bank vault designed for the movie. Burrell sheds his Modern Family dad persona to play a French inspector, and Ricky Gervais plays an evil villain intent on using the Muppets to steal England’s crown jewels. Tina Fey is a tough-talking Russian prison guard.

Kermit and Miss Piggy arrive in style, as always, in a custom-painted black Toyota Highlander. Miss Piggy dons the sapphire gown she wears in the movie while performing with her idol Celine Dion. Miss Piggy also wears a stunning wedding gown in the movie, but do she and Kermit finally tie the knot? We won’t spoil it for you–you’ll have to see for yourself.

Next Page
photos by Kimberly Phipps