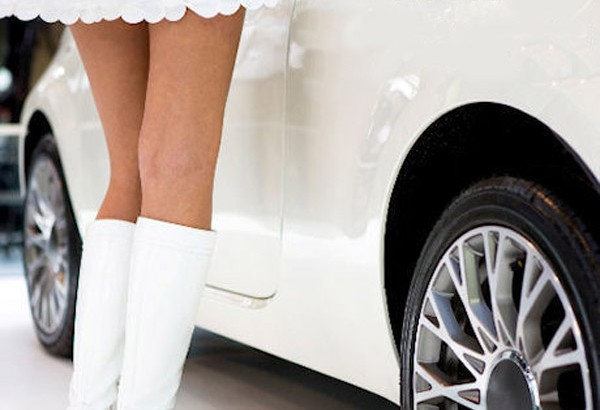 I Brake for Mini Skirts

A driving instructor isn’t being sexist when he says that hiking up your skirt can improve your driving skills. Go figure.

I have long been in favor of letting people wear what they want, pimply-faced youths in baggy pants included. If freedom to choose simply brings conformity, so be it. However, some clothing can enhance performance. Yoga pants will be better for a dance class than tight jeans. Oddly enough, the subject of this article is mini skirts and how they can enhance braking skills.

For those of you who don’t know, Mary Quant, an Englishwoman, is credited with creating the first modern mini skirts in the 1960’s. She had opened a small boutique in London, and instantly became a celebrity designer. Young women in London loved her stuff, and mini skirts soon became popular in much of the western world. Not everyone was as enthusiastic. The Vatican immediately banned the short skirts, and in Greece, women caught wearing one could be jailed. Girls were sent home from school in many areas if the hemline was above a certain length. Thankfully, we have truly come a long way, Today, at least away from some of the more conservative workplaces, men and women are free to wear, within reason, what they wish.

I’m not embarrassed to say that I like to see an attractive woman, well dressed. Skirts, properly fitted to physique and occasion, have a certain je ne sais quoi. Of course, here in the mountains we also favor our practical clothes. For us, Gore-Tex is as big a fashion name as Armani. In our local gym, the reading racks are stacked with Outside, Ski Canada, Powder Magazine, Mountain Bike, National Geographic, and so on. There are a few issues of Cosmo and Vogue scattered around, in case anyone wants to get the latest from New York and other centers of style. In general, though, Mary Quant’s revolution is only of academic interest.

Does This Mean It’s Time To Shave?

By this point, you’re probably wondering what this has to do with car control. My colleagues and I (I am a professional driving instructor in British Columbia, Canada) have noted, over years of teaching advanced driving courses, that women in snug-fitting skirts or dresses generally did very well in our braking exercises. They also tended to have better footwork. It didn’t really matter the style, and it went beyond the normal female advantage of using technique instead of brute force.

Here is the key. Women wearing mini skirts tend to sit with their knees together. This is important. In racing cars, we also drive with our knees virtually together. One reason is that brake and throttle are much closer together than in a road car. Getting the two pedals simultaneously is a bad combination but a classic rookie mistake. This also occurs quite often in advanced driving schools, especially in sportier cars where there is less of a gap between gas and brake. In addition, the knees together position facilitates heel-and-toe downshifting, which is a technique that allows maximum braking while still being able to give the car a few revs to smooth the downshifts. (Manual gearbox only, of course.) The biggest single reason, though, for keeping the knees together, is that it allows the driver to apply forces to the brake pedal in a straight line, versus at an angle. That allows fine adjustment with the ankle, as opposed to the less refined large muscles of the leg.

Just to clarify, when braking is applied it is actually the right knee that should move towards the left knee. The left foot is on the footrest or “deal pedal” on that side.

Car racing, like a lot of sports, is a game of subtle improvements. An advantage in accurate braking is the kind of edge drivers love to have. It also helps in smoothness and safety for motoring on public roads. Beyond that, if the soles of your shoes are slippery, on a rainy day, they are less likely to slip off the brake pedal if pressure is being applied in a straight line.

I am not about to suggest everyone wear mini skirts when behind the wheel. However, assuming that you and your car are a good fit, keep your knees closer together and develop better footwork. A side benefit Mary Quant could not have expected when she penned those first designs.

2 Responses to “I Brake for Mini Skirts”