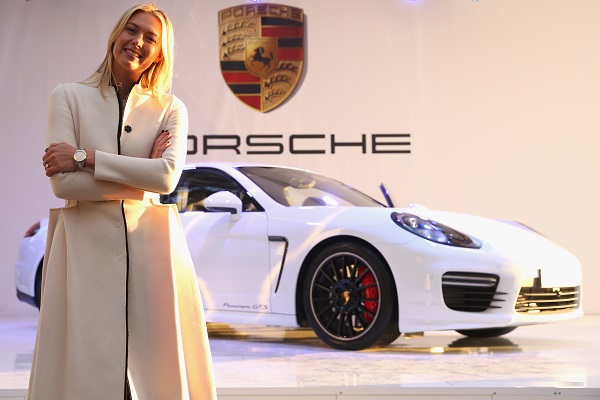 Maria Sharapova Lobs One For Porsche

Russia’s top tennis champ – and Sochi native – reveals a bespoke Maria Sharapova Porsche just in time for the Olympics in her hometown.

You may wonder what a tennis player is doing helping to design a legendary sports car. But in a world where Sylvester Stallone can design fancy pens (his 18k gold Montegrappa Chaos writer goes for $65,700) and Kanye West has put his name on a plain white T-shirt, which sells for $125 (yes, it’s really just a white T-Shirt), then why not have an accomplished (and yes, strikingly pretty) tennis star glam up a car?

Maria Sharapova, who is Porsche’s brand ambassador, put her moniker on a a Panamera GTS, which is meant to showcase how buyers of this luxury grand tourer can personalize their own wheels with elements that include custom interior stitching, special wheels and paint colors. The Porsche Exclusive Club has designers on hand who can assist in creating gorgeous combinations in leather, stitching styles and colors.

The Porsche Panamera GTS “by Maria Sharapova” is a one-off masterpiece. Though this model was made for Sharapova and isn’t for sale, apparently she won’t be peeved if another buyer wants to snag a few of her ideas. The Maria Sharapova Panamera includes glossy black LED headlights and tinted LED rear lights. The black tailpipe covers the sports exhaust system, and her car wears black 20″ Panamera sports wheels. There’s loads of leather in the interior, all stitched in a muted cream color, and the car is decked out in Carrera White. But our favorite detail? The carbon fiber door guards read Maria Sharapova. For sure, Sharapova will be able to find her stunning Porsche even in the most crowded parking lot.

Pretty, yes. But does it go?

The Porsche Panamera GTS is equipped with a naturally aspirated 4.8 liter V8 engine with 440 hp at 6,700 rpm. It accelerates from zero to 60 mph in 4.2 seconds and reaches a top track speed of 179 mph. Maybe soon they’ll be calling her serve a Maria Sharapova Porsche!