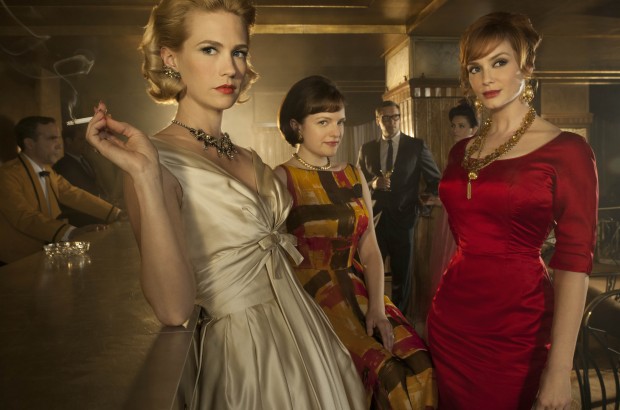 “Mad Men” Women: What Would They Drive Today?

The name of the show may be Mad Men, but we know it’s all about the women and their style. Over the last few years, we’ve come to know and love the sassy, smart ladies of AMC’s Mad Men. Each has a style all her own, from suburban housewife to sexy vixen.

A Vroom of their own

Betty, Joan, Peggy, Megan, and Sally. In the six years since it began, Mad Men has immersed us in an era when every office had a liquor cabinet, and every lady wore a girdle. In the beginning, these women’s characters were pretty much defined by their relationship to men–the wife, the secretary, the new wife, the office girl, the daughter. Although the New York advertising world in the 1960’s was definitely a man’s world, the bigger story arc has been the shift in power from old to young, and from men to women. We’ve watched the women maneuver around numerous roadblocks to determine their own destiny, going from office girls to copywriters and agency partners.

Of course the show has great writing and characters and all that, but a big part what makes the show so fun to watch is the style of the aforementioned women. We get to see their fabulous retro-chic fashion choices on TV every week, but what about their cars? Unlike their fashions, automotive options were limited in the 1960’s, but in 2013, each of the ladies would be able to choose a radically different car to show off her own personal style. Which cars would they choose, if they were shopping today? We have some ideas on which wheels these mad women might prefer.

This one is a no-brainer. Joan Holloway is all that, and she knows it. She’s confident, sassy, and has expensive taste. She would consider the term “high-maintenance” a compliment. She is known for her ample and sexy curves, and handles herself very well. In fact, Joan’s bio could read like the ad copy for a new Jaguar. No one buys one because it’s practical, or easy to maintain. Jaguars are sexy, in a classy, upscale sort of way. It’s a car for grown-ups.

Jaguars had a starring role in last season’s Mad Men episodes. Don Draper and Joan play out their fantasy by strolling through a Jaguar dealership, and then taking off on an impromptu extended test drive. A gorgeous Jaguar was also the irresistible object of desire for poor departed Lane Pryce, and almost became his final resting place. And lastly, the fate of Sterling Cooper rested on the willingness of Joan to bestow certain favors on a Jaguar executive in order to win the account. So now that Joan’s an actual partner of the agency, she needs an upscale ride to show off her new status.

Which chassis shall we choose for Joan’s famous chassis? We’ll go with the classic Jaguar XK. Everyone knows redheads look great in green, so we’ll go with British Racing Green. It’s a sophisticated grown-up car, just like Joan.

Peggy and the Prius

Peggy Olsen is the girl next door who has discovered her independence. In six seasons, she’s morphed from the shy, cute but kinda frumpy office secretary to the confident copywriter who can hold her own in the man’s world of 1960’s New York advertising. Peggy has upped her style game in the last few years, but she’s still got more of an practical quality than a drop-dead sexy one. After all, she’s got work to do, and doesn’t need a sugar daddy to buy her slinky dresses. She’s a city girl, so she needs something small to maneuver the traffic on Madison Avenue. She hangs out with beatniks, artists, fellow writers and politically liberal folks, so she’s bound to be concerned about the environment. Plus, she makes her own money, so she’d rather spend it on a fun night out or a down payment on a brownstone than more gas. So we think a smart Prius C would be the kind of car that forward thinking, practical Peggy would be likely to choose. What color? Maybe Blue Streak, to match her eyes. Or the new spicy Habanero, to stand out in the crowd.

As the ex-Mrs. Draper, Betty is the woman who Has It All, and isn’t afraid to show it. A former model with Grace Kelly-esque looks, she’s had the exciting nights in the city with Don, goes horseback riding on the weekends, and has a huge, old money mansion. When she’d had enough of Don Draper, she kicked his sorry butt to the curb and married someone older and richer. She will stand in her front yard, cigarette dangling from her lips, and shoot your pigeon with a shotgun if you piss her off. Does this sound like a woman who worries about the environment or fuel economy? Not so much. Betty wants to look great, haul around three kids, her equestrian gear, and the day’s shopping loot, then drive anywhere and over anyone she damn well pleases. And, as of last season, her habit of standing in front of the fridge squirting whipped cream from the can directly into her mouth has left her needing something…how shall we say this politely?…very roomy. Betty’s pick? The all-new 2013 Range Rover. It’s posh, family friendly, and can mow down anything that stands in Betty’s way. We’ll even upgrade her to the $130K Autobiography edition, because she would want it, and Henry would buy it for her. All the other suburban housewives better get out of the way when she revs that 510 horsepower engine. Color? White, of course. After all, as she says, “My people are Nordic.”

Ms. Draper Will Do the Driving

Plenty of haters have bagged on Megan, Don’s young and charming French Canadian wife. But she has proven to be a breath of fresh air for for the smoke-filled rooms of Sterling Cooper Draper Price, and is doing her best to drag Don, albeit kicking, screaming, and smoking, into a new era. If Betty personified the perfect wife of the all-American 50’s, Megan is the new, fresh face of the late 1960s. She has that European flair–who could forget her coquettish rendition of Zou Bizou Bizou at Don’s birthday party? Very confident, sleek and understated, her style is more long and lean than flashy. She has good taste, and being the new Mrs. Draper as well as a budding soap opera star gives her the money to afford what she wants.

We could see Megan being quite happy with a 2013 Audi TT Coupe. It’s smart, European, fashionable, and a head-turner. Like Megan, it’s designed for style and fun, not for the kiddie carpool. Megan could rock her sleek, slim-fitting dresses in this snub-nosed beauty, all while flashing that yes-these-are-my-crazy-teeth-and-I-don’t-care smile. Don will probably look about as comfortable in the passenger seat as he does at the avant-garde theatre. And, it has enough muscle that when she’s doing the driving, next time she can peel away from the Howard Johnson’s and leave Don just standing there when he’s being a jackass. What color? We’ll go with white–like the impractical but lovely carpet in her gorgeous penthouse. Megan’s rules for her Audi? No car seats, and no orange sherbet.

She may not be old enough for her driver’s license just yet, but have rules ever stopped Miss Sally Draper from doing what she wants? Absolutely not. The amazingly precocious Sally has smoked cigarettes, drank alcohol, driven a car, hung with a “bad boy” behind her mother’s back, run away from home, and gone to therapy–all before the ripe age of 12. She’s grown from the sweet little kid with a lisp to a stylish young lady in go-go boots, screaming for the Beatles. With a crazy mom like Betty, and philandering alcoholic Don as a dad, Sally no doubt has some rebellious teen years in front of her. We could see Sally going for some accelerator-pedal style therapy in the form of a 2013 Mustang GT, in Red Candy Metallic. This car is just asking–no, begging–for trouble. This is one car that always tops the teens most-wanted list, no matter the decade. Besides, anyone with the name Sally has to at least consider getting a Mustang, right? Ride, Sally. Ride.