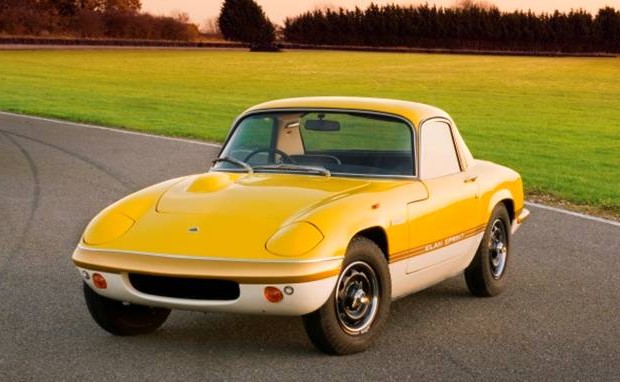 The Granddaddy Of Cute Cars

The Lotus Elan turns 50, and though guys might blanch at the thought, this sports car looks adorable to us gals! VroomGirls says Happy Birthday, Cutie!

Avengers fans – not of the new movie out in theaters now, but of the fabulously stylish iconic 1960s British spy series – certainly will remember this drop-dead sexy, fun, sporty ride driven by the show’s lead vixen, Mrs. Peel.

OK, so if you do remember this car, it’s depressing to know that it is now 50 years old. UGH! But just like this Lotus Elan, you have probably improved with age, no?!!!

The Lotus Elan debuted in 1962 and signified youth and freedom. Built to hold just two people, it was intimate. Sexy. Playful. And it was the height of pure contemporary luxury for its time, outfitted with the latest gadgetry: electric windows, a fiberglass body, carpet, even a heater. It’s interior trim was wood. Tres mod!

The Lotus Elan was a speedy little devil, shooting from a standstill to 60 mph in 6.6 seconds. In its day, that was lightening quick, and still today would be considered thrillingly fast. With its groovy pop-up headlights, it was as much a hit with the swinging 60s Kings Road mates, as with serious sports car aficianados.

Aside from The Avengers’ Diana Rigg (as Mrs. Peel) doing wonders for the Elan’s image, the car was featured alongside Jimi Hendrix on a rock ‘n roll magazine cover and actually was the inspiration for the first couple of lyrics in the Beatles song “A Day in the Life.” It seems a young Guinness Ale scion, who was friends with John Lennon, crashed and was killed in his Lotus Elan during the time Lennon was writing the song. He changed the song’s direction to say, “he blew his mind out in a car.”

Can You Say Miata?

If you think the bean-shaped Mazda MX-5 Miata looks a bit like the Lotus Elan, you’re observant. It was inspiration for Mazda’s super-popular and enduring little two-seater, the Miata. And the Elan set the stage for Lotus’ next great two-seat roadster, the Elise, which is now in its third iteration.

VroomGirls says Happy Birthday to the sweet little Lotus Elan. We wish all cars were this poetic.

2 Responses to “The Granddaddy Of Cute Cars”