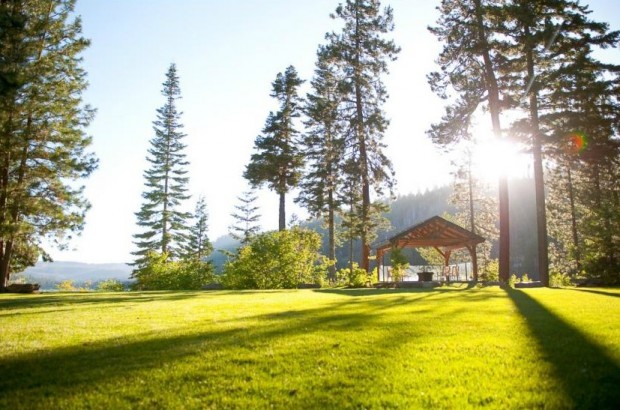 Back in prehistoric times when travel agents roamed the earth, we’d been steered to the King Pacific Lodge in British Columbia for a couple of terrific but expensive vacations. This year, we wanted a King Pacific-like experience but easier to get to and easier on our wallets.

God bless Google for coming up with The Lodge at Suttle Lake just outside of Sisters, Oregon. It was a quick and fun Virgin America flight into Portland where we picked up our rental car and literally headed for the hills. In less than three hours, we were driving under a canopy of Douglas fir and Ponderosa pines that lead up to the The Lodge, a beautiful cedar structure built in the Grand Cascadian Style. I don’t know what those words mean but that’s what the brochure calls this inviting, rustic yet elegant lakeside hotel.

The front door is beautifully carved to honor the Native Americans that according to the Forest Service first lived in the area 10,000 years ago. We walked into the Great Room with inviting couches facing a giant fireplace, looked out over the rolling lawn and the crystal clear lake it borders and laughed at the sheer insanity of there being a place so beautiful. There’s no traditional front desk to check in with; there’s a guy named Josh who greets you by name and gets you squared away in an instant.

We opted to stay in one of the Lodge’s eleven guest rooms, either Deluxe suites that sleep one or two, Lofted Guest Suites that accommodate up to four people as well as Standard Guest Suites that also sleep up to four. Ours was called Big Mountain and it blew me away. I mean, here we are in the middle of Oregon paying unbelievably reasonable rates and our room, as all rooms, has a huge bathroom with both a shower and a giant Jacuzzi tub, a raised King bed with two-step stools for easy access covered in soft and beautiful variations of Northwest and Native American-inspired blankets and pillows, leather club chairs with ottomans, a carved wooden rocking chair with an ottoman AND panoramic views of Suttle Lake. And like the Kinsu knife guys says: “But wait, there’s more!” All the amenities are top of the line Molton Brown products, there are towels galore (my new Bond girl name) and not only a coffee maker but actual freshly ground coffee in mason jars as opposed to stale pods plus an array of teas, cocoa and hot cider.

And yes, there’s TV plus a DVD player; they have a nice assortment of dvds in the Great Room you can borrow, everything from “Bob the Builder” to “The Godfather” to anything from Adam Sandler’s oeuvre. The Great Room also has a daily wine and cheese (and Oregon’s own Deschutes draft beer) “social” that sounds quainter than it is. You can enjoy your adult beverage from an Adirondack chair on the patio, inside while reading or vegging out or from the gazebo perched out over the lake, complete with firepit. If you’re in the mood to share or just on a vacation binge, they have a really nice assortment of wines by the bottle too.

For those who are traveling with kids or antsy adults, there are a number of games to be played on the lawn; we saw croquet, touch football, kite flying and the old standby “let’s twirl grandma in a circle till she gets dizzy” game. I say “saw” as opposed to “played” because when given the choice of Merlot or Frisbee, there is no choice.

Speaking of family, if you’re visiting with yours or with a group of friends, there are lots of cabins that dot the property ranging from Rustic to grand Historic that comfortably sleep up to eight people. Oh and did I mention that entire place is pet friendly?

Little Spa on the Prairie

Let us now discuss the spa. As a total massage hound, I was skeptical when I saw The Lodge’s spa was nothing more than a tiny cabin on the side of a burbling creek. “Where are the robes? Where are the products? Where are the overpriced magazines and little Buddhas that normally sit in spa waiting areas?” I’ll tell you where: back in whatever city you came from. All you get here is a crazy-good deep tissue massage or hot stone treatment or whatever your heart desires performed in my case at least by a true bodywork genius with the soul of a healer and the appearance of a bona fide hippie chick. Her name is Becky. Find her. She’s magic.

The Boathouse Restaurant sits lakeside. We were happiest there at lunch when the ducks would swim by or waddle up. I spent most of my time at the Marina where I kayaked up and down the 1½ mile lake which is surrounded by a walking trail. As I posted on my Facebook page after one particularly spectacular paddle: “I have seen an actual pig in you-know-what and here on Suttle Lake, I’m happier.” The Lodge is byob – bring your own boat if you’re a water-ski enthusiast but the Marina does have kayaks, canoes, a fishing boat (lots of trout Suttle Lake) and a small sail boat.

If you want to be loud and fast on the water, Josh pointed us to the Detroit Lake Marina where you can rent just about everything that floats. What I most appreciated about Detroit Lake was that one side was for those like my son who had a definite need for speed and the other side for people like me who wanted to paddle peacefully among the butterflies.

Sisters you actually want to visit

A word about the town of Sisters, Oregon: go. It’s got funky antique shops, eye-popping quilt stores, barbecue that’ll curl your toes and breakfast all-day joint called The Gallery (541-549-2631) with homemade cinnamon buns and bowls of warm applesauce, both of which I still dream about. For snacks, I loved Melvin’s Market (outlawclown@msn.com) that was somewhere between a General Store and Zabar’s. Local fruit and ice cream (and everything else but once I had fruit and ice cream, I stopped shopping) and anything you need or just plain want.

One afternoon, my son went white water rafting on the McKenzie River with Ouzel Outfitters and he had a blast. Check them out at www.OregonRafting.com. He came home happy and hungry; what more could a mother ask for?

Our last morning at The Lodge, I went down to the Marina for my farewell paddle. There I was under a blue, blue sky in the middle of a pristine lake in the shadow of the snowcapped Three Sisters Mountains grinning like an idiot. That’s what The Lodge at Suttle Lake did to me – it made me unbelievably and utterly happy. Who could ask for anything more?