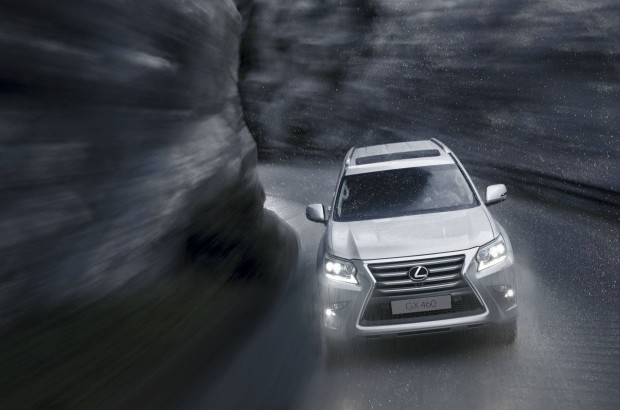 Polar vortex? Bring it … I’m in a Lexus GX

If ever there was reason to upgrade to a safer, more capable, comfortable and luxurious set of wheels, certainly the brutal winter of 2014 will go down as the winner.

The prospect of making it safely along an icy wintery highway when you’ve got a carload of kids is enough to strike fear in even the most accomplished drivers. We’ve all been there. You’ve got a carpool to drive, but the roads are laden with ice, slush, mud, and the detritus of previously smashed vehicles. What’s a mom to do? Get some wheels that are up to the task.

VroomGirls has taken the sturdy – yet oh, so elegant – 2014 Lexus GX on a test run to see if it could pack a punch against winter’s best. Indeed, the GX, with its full-time all-wheel drive that delivers power to all four wheels, is an able-bodied warrior. It grips the road in frosty conditions. And if you live in or travel to steep hilly areas, opt for the available CRAWL Control system, which intervenes to keep the Lexus GX in a slow, controlled descent should the hill’s angle be rather steep or slippery.

Like to tow things? A horse trailer, a boat? The 2014 Lexus GX can haul up to 6,500 pounds. And a new Trailer Sway Control system stabilizes the trailer’s movement to help prevent any fishtailing that could cause an accident.

Peace and Quiet, Or At Least A Killer Sound System

Okay, so you can feel safe driving. But how about a little pampering for the gal who runs carpool and keeps the family fed and happy? Lexus hasn’t forgotten about you, girl. If it’s quiet you want, the 2014 Lexus GX is soundproofed well to keep noisy highway cacophony at bay. Or shatter the quiet with a Mark Levinson Premium Surround Sound audio system that was designed especially for the GX’s interior contours. It rocks 17 speakers and 330 watts of power.

Your inner sanctum is further enhanced by peace of mind. Use a subscription-free real-time traffic and weather service that mitigates the stress of your commute. And Lexus’ proprietary Enform is an app-based entertainment system that has Bing, I Heart Radio, Yelp, and Pandora; and you can check your Facebook, make dinner reservations, and buy movie tickets all from your multi-media touchscreen.

Navigating cramped parking lots is a breeze with an optional Wide-View Front and Side Monitor System, which uses cameras to help see around corners and show how much space you have left in a tight parking slot. For those frosty mornings, the 2014 Lexus GX has a heated steering wheel. Should your kids still be in the backseat, they’ll no doubt adore the dual screen entertainment system, which allows each kid to watch a different video on separate screens, with wireless headphones. Heck, it’s so nice in here, you’ll think twice about exiting the vehicle for your home.