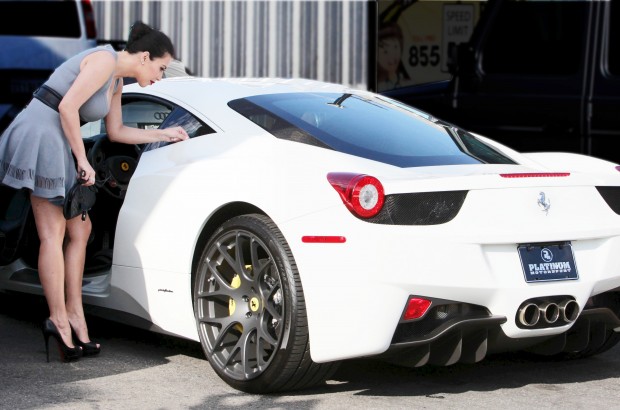 She’s got a hit television reality show about her family; just had a multi-million dollar wedding to her pro-basketballer boyfriend and is constantly seen dripping in diamonds and couture gowns. What else could Kim Kardashian want in life?

Looks like the girl who has everything had a space in her garage and decided a Ferrari 458 Italia would look good alongside the Rolls-Royce and Range Rover she already owns. According to TMZ, Kardashian picked up her customized white Ferrari from Platinum Motorsport in Los Angeles, the same dealer that helped provide all those Rolls-Royce Phantoms for her recent wedding to Kris Humphries.

Valued at around $325,000 — it looks like the dealership changed out the rims on the ride and perhaps pimped out the interior a little — the 458 has a 4.5-liter, V8 engine with 570 horsepower and 398 lb-ft torque. It can go from 0 to 62 mph in a mere 3.2 seconds and tops out at a maximum speed of 202 mph. It’s good to have all that horsepower, especially if you are late for a nail appointment or just found out Herve Leger is having a sale on super-tight bandage dresses. The 458 Italia is the second vehicle Kim has picked up in 2011. Earlier in the year she took possession of a customized Rolls-Royce Ghost (starting price around $250k) and already owns a Range Rover Supercharged.

The gossip mill is rife with reports that Kim may have bought the car for her new hubby, but Ferraris have never been a car-of-choice for long and lean ballers like the new Mr. Kardashian — sorry, Humphries. Just not enough leg or headroom for those of such elongated stature.

The 458 is a perfect fit for Kim K., though. What with all those rounded curves on the bodywork and snug racing seats to, well, hold her curves.

Let us know if you see (or like most Ferraris – hear) Kim hurtling down the street. One thing’s for sure, she’ll have a huge smile on that pretty face of hers!