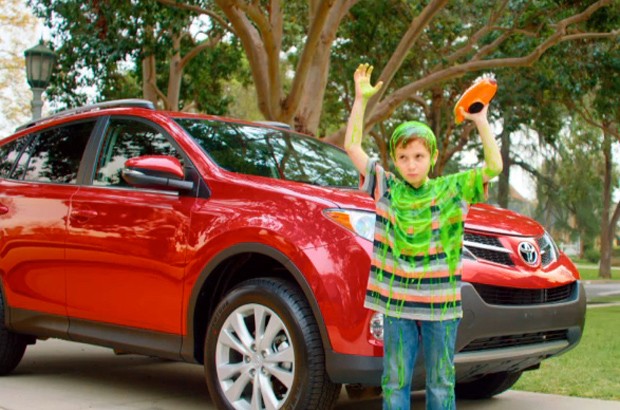 Slime isn’t what it used to be. Back in the day, slime was something you tried to clean out of your pool, or what you got when you drove behind a car with a big, drooling dog sticking its head out of the window. But that was before Ghostbusters made “getting slimed” an occupational hazard, and Nickelodeon started dumping buckets of the neon green stuff on unsuspecting kids on television. And it’s a staple of the Kids’ Choice Awards.

Now, getting slimed has a certain panache to it–Will Smith, Katy Perry, Heidi Klum, Justin Bieber, Halle Berry and other big celebs have taken a dousing of the slime at the Kids’ Choice Awards, and seem to have a blast doing it.

But getting slimed is not just for A-list celebrities. Toyota, a sponsor of this year’s Kids’ Choice Awards, has partnered with Nickelodeon to offer the chance for kids and families to get slimed at a live I Wish To Get Slimed event. The event will allow participants to get virtually slimed (using 3-d imaging software) if you aren’t into scrubbing the lime jello and flour concoction out of your cashmere. But never fear, contestants will also be able to enter in a daily competition for a real, non-virtual sliming.

One lucky sweepstakes winner will receive four tickets to this year’s Nickelodeon’s 26th Annual Kids’ Choice Awards, airing on Saturday, March 23 at 8 p.m. ET/PT on Nickelodeon. This year’s host is super hottie Josh Duhamel, of the Transformers movie series fame–who’s no stranger to getting doused in the green stuff himself.