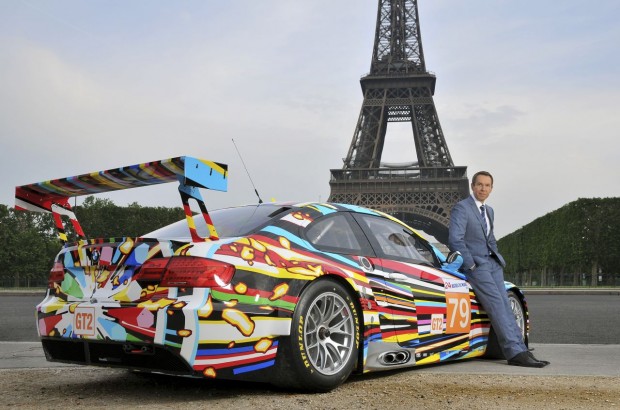 A Bimmer from Artist Jeff Koons

Looking for an excuse to take a winter vacay in Miami? (other than an escape from the arctic weather) We have one for you: the one-of-a-kind BMW M3 GT2 painted by superstar artist Jeff Koons is making its U.S. debut at the Art Basel in Miami Beach.

It may have more colors than the coveted 64 extra-large box of crayons, and goes from zero to sixty in less time than it took you to read this sentence. The latest in a series of BMWs to be customized by renowned artists, the custom Jeff Koons racer will be featured in the 12th annual Art Basel, a gathering of fine art and artists from all over the world which descends on Miami Beach December 5-8.

Although it is one of a kind, it is not the first BMW to be customized by a legendary artist–in fact, there have been seventeen of them commissioned by BMW. Artists such as David Hockney, Frank Stella, Robert Rauschenberg, Roy Lichtenstein, and Andy Warhol have all lent their unique visual style to a BMW, using the car as their canvas. You can see the history of BMW’s collaboration with the art world in this film about BMW Art Cars. Warhol’s edition, done in 1979, is one of the most memorable. The number “79” on Koons’s car is a shout-out to 1979, the year Warhol’s car made its debut. These cars weren’t made just to be admired in a museum–all of them have proved their mettle at France’s famed Le Mans racetrack.