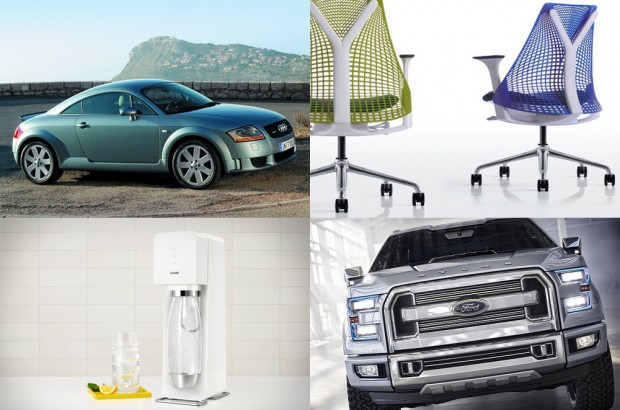 Industrial Design for Cars of the Future

Ever wonder why your car looks the way it does? For industrial engineers, it’s not a thought—it’s an obsession. Car design is one of the most challenging and interesting fields for young designers. Ford and the International Designers Society of America got a few of the best-known stars of industrial design together to share ideas and talk shop about design innovation with students—and show off the Ford F150 truck’s radically new aluminum body, which is 700 pounds lighter than its predecessor.

Art on your desk and in your driveway

Industrial design is the unsung hero of the art and science world. Their paintings may not be hanging in the Louvre or featured in Vogue, but their works of art are the things you drive and use and see every day. Sure, you may know who Steve Jobs is, but he’s not the artist who designed the look of the iPod—that would be industrial designer Jonathan Ive. And have you recently sat in a Herman Miller Sail office chair, enjoyed wireless music on a Jawbone Jambox, made your own bubbly with Sodastream, or slathered on some Nivea body lotion? If so, you have been enjoying the design sensibilities of Yves Béhar, the dreamy-eyed Swiss wonderboy of industrial design.

Béhar was amongst the panel discussing the future of industrial design along with Freeman Thomas of Ford Motor Company. If Béhar is the poster boy for the San Francisco high-tech startup crowd, Thomas is the opposite—a no-nonsense, midwestern automotive design legend who is the designer for many of the cars on the road today, including cars as diverse as the the new Volkswagen Beetle, the Audi TT and the Chrysler 300, just to name a few.

So what are the key factors to consider in automotive design, as opposed to a beautiful desk lamp or soda bottle? Of course, we always want our cars to look great—that’s a given. But Thomas is quick to point out that cars have a unique set of design parameters that household widgets never will—there are people inside of them. It’s one thing to design a safe set of cool headphones, but it’s a very different operation to design a safe car. The regulations for safety and engineering for a car are staggering.

One factor of design that all the designers agreed has become inherent to any good design is the idea of sustainability. It’s no longer something to be thought about after the fact—efficiency and sustainability have become the whole raison d’être for new designs.

Paint is so last season

An example sited by Béhar was how the Sodastream was designed. Instead of using cheap materials and then covering them with paint to make them look better, it was designed with materials that look nice inherently, and don’t need to be painted. This is one idea that Thomas has been using at Ford as well. The trend is to develop materials that he says are “self-filmed”. It works with some of the interior parts today, and soon a day will come when the paint job on a car can be eliminated altogether, allowing the inherent properties of the material to determine the color—as Apple did with the sleek design of the MacBook computer.

“Eventually eliminating the paint job,” says Thomas, “is one of the goals.”

These sort of practices are not just sustainable and better for the environment, says Thomas, but are at the heart of what Henry Ford invented with the automotive assembly line—efficiency. According to Thomas, Ford wanted to use reuse every single piece of material possible, down to reusing the boxes the tires were shipped in as the floorboards, and taking any extra wood leftover to make charcoal pieces.

Ford has now put its innovative spirit to the test with the release of the 2015 Ford F-150 series truck. It is the first of its kind to have a military-grade aluminum body. It is available in an aluminum silver color, but still has a paint job—for now.