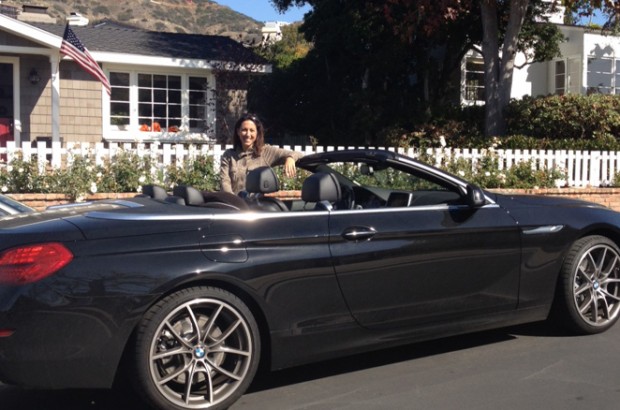 In the Car with: Olympian Janet Evans

VroomGirls caught up with 5-time Olympic medalist (4 of them gold!), 3-time world record holder, and the woman recognized as the best female distance swimmer in U.S. history as she was finishing up a training session near her home in Orange County, California.
Janet Evans recently announced her comeback as a competitive swimmer. At age 40, this inspirational mother of two (and big BMW fan!) is back in the pool with her sights set firmly on the 2012 Olympic Games in London… and BMW, Official Mobility Partner of the United States Olympic and Paralympic Teams through the 2016 Games, will help her get there.

Congrats on being back in the pool. But today we are going to be talking about cars, not swimming!

What are you currently driving?

It’s black on black and I love it. Yesterday my daughter asked if we could get a car with a tan interior. She was all “Why is this black?” Because you make it dirty is what I told her!

Believe it or not, I have two car seats in the back of it and my kids love it.

Is this your first BMW?

Oh no! [laughs] My first BMW was, well, it’s a bit of a long story.
When I was turning sixteen I really wanted a car and asked my parents to buy me one. They said no because when my two older brothers had turned sixteen they had not gotten a car and that was just the way it was.

And my Dad asked what kind of car do you want? I said I want a red 325i BMW convertible with black leather interior and a black top. And I came home from the ’88 Olympics and it was waiting in the driveway. It was awesome!

Which has been your favorite?

My 325 because it was so special. My parents got it for me, it was after the Olympics where I won a gold medal, I was a teenager, and I had a convertible! But I really loved my 7. As I got older it seemed the perfect grown-up car and I just loved it.
The 5 was great, too. It was a 540 and it was a stick shift. That’s a hard question because I loved them all for varying reasons but I did really love my 7. It was a 745 and I got it in 2004/2005.

I always felt like the performance was there. And I was going to do my workouts and swim training at 4 a.m. so it felt good to know I was driving something so reliable when I was a teenager and going through college. And they’re very comfortable as well. When I had my 7 I had a newborn and it was roomy and big but at the same time it was still sporty. BMW just gave me everything I wanted in a car. I’m a California person so I love cars! I grew up in Fullerton.

And in terms of reliability – especially now with kids – I need a reliable car. I need something that works and that I can count on at all times.

How old are your kids now?

So you do really have a full 6 series!

It is. Full and fun.

What items can we always find in your car?

I would love to. Yeah! See people kept saying to me you can’t fit two kids in a 6. Yes I can! I love driving. The next 6 I get, if I get another one, will be a stick shift. Much more fun to drive.

You prefer driving a stick?

How does it feel being back into a full schedule of training at 40?

It’s great. I’m training six days a week about six hours a day and I’m in the best shape of my life. It’s been a challenge because of my age but I’m swimming really well and I’ve surprised myself. And it’s been surprising fun.

Well, it must be great that you are now part of the BMW Performance Swimming Team considering your love of the brand?

I know. I couldn’t have planned it better!

If you could have your dream car – and it sounds like you may have got that car when you were 16 – what would it be?

So you like speed and power in the pool and on the road?