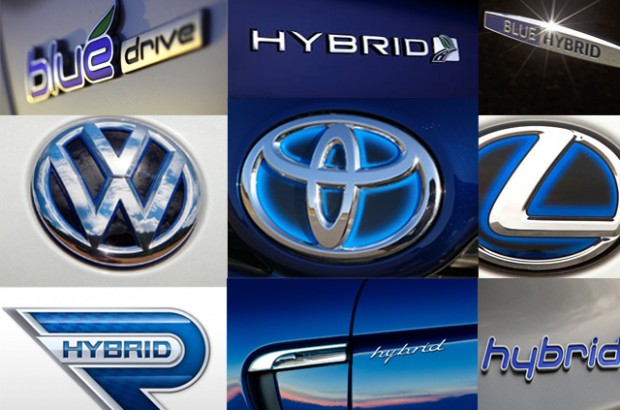 History of Hybrid Cars: A Blue Badge is Born

Thirteen can be such an awkward age for us humans. But hybrid cars are another story–they’ve never looked better. The history of hybrid cars began 13 years ago with the debut of the first electric/gas hybrid car in the US, and the hybrid car has grown from a curious novelty to the car next door.

A History of Hybrid Cars

Ever listen to those radio flashback things, like the 80‘s at eight, and 90’s at nine? Or the 00’s at…well, whenever time they play them? Here’s a flashback for you : the year is 2000. We all waited for digital armageddon, but midnight came without too much drama, except for finding a place to store all those extra batteries we stocked up on. White guys were rapping (Eminem) and an African-american kid was ruling the golf course. (Tiger Woods). Women were bein’ independent with Destiny’s Child, along with Christina Aguilera and Creed. We laughed at Meet the Parents, and swooned for Gladiator. We were just starting to hear about this Sex and the City show. Cell phones still had actual buttons and a pull-out antenna. AOL took time off from sending you all those CDs to buy Time Warner. This was pre 9/11, pre Katrina, pre Iraq war. Hybrid Cars were not a part of our lexicon. If you were born in 2000, you are now 14, developing a surly attitude toward your parents and getting braces.

And then, there was the automotive landscape. Most Americans were still enamored of trucks, big SUV’s (remember the Hummer?) and the like. And why the heck not? The cost of gas was–brace yourself!–about $1.30 a gallon. Most people had no idea what global warming was. Al Gore was that guy who was scratching his head wondering what the heck just happened in the Presidential election, not yet the environmental poster boy he eventually became. Green wasn’t a movement yet–just a color.

Something pretty monumental happened in the year 2000 that was destined to have a bigger impact on our lives than the final episode of Beverly Hills 90210. This was a watershed in the history of hybrid cars: the year that Toyota offered the very first gasoline-electric hybrid car for sale in the US, the original Prius. What does hybrid mean, exactly? Put very simply, it’s an engine that relies on a mixture of traditional gasoline and electricity to power the car. The Latin word “prius” means “before”, which was a very apt name for the new offering–it was released before environmental awareness became the mainstream social issue that it is today.

It’s also worth noting that the original Prius was released before gas prices shot up far beyond what anyone would have imagined. When prices started hitting record heights in 2008, gas station owners weren’t even able to post their prices properly on their signs, because there weren’t enough of those plastic sign numbers available in the number “4” for them to display prices that went above the four-dollar-per-gallon mark. Most of us had never imagined that the price of gas could climb that high, that fast. This was not just a weird spike, or regular inflation–a new normal was here for the fossil-fuel dependent.

In its early years, the hybrid car was seen to many as something of a novelty–and its driver was as well. As with any new technology, early adapters get the benefits of having the newest and coolest thing, but then have to cope with the backlash of having the newest and coolest thing. In the years since its debut, the Prius has come to be synonymous with the hybrid car, and all the associations that go along with it–for better and for worse. It has become such a cultural phenomenon that there is even a South Park episode devoted to it, called Smug Alert, which lampoons the perceived superiority complex of the environmentally-conscious drivers. These blue emblem became so symbolic of the green movement that a bit of hybrid car backlash had started.

And before you could say, “It’s gettin’ real in the Whole Foods parking lot”, the Prius became the symbol of all that was West Coast, green, LA, hipster, and all that. Practically any television show you can think of showed a Prius on camera. This wasn’t just product placement–the car became an actual character in television shows like Weeds, Curb Your Enthusiasm, and Modern Family. And driving a Prius became the newest “in” thing for Hollywood celebrities–everyone from Miley to Gwenyth was rolling in a Prius.

So that’s great for Hollywood. But what about the rest of the country? Turns out, the hybrid car had some traction there as well. Again, at first, there were questions. Why is it shaped like that? Do I have to change the way I drive? Why does it get so quiet–did it just stall? Do I have to replace the battery? Will this thing explode? While consumers may line up for the chance to spend a few hundred bucks on a new kind of phone, spending several thousand dollars on a new type of car is a riskier business–especially when your family is inside of it. But as time went on, driving hybrid cars turned out to be pretty much like driving any other cars. As fear of the unknown wore off, more hybrid cars hit the market, making them less of a novelty. And as gas was hitting the $4 per gallon mark, suddenly that huge gas guzzler didn’t seem so desirable. A hybrid car that got over 40 miles per gallon wasn’t desirable just because it had lower carbon emissions–it was desirable because drivers didn’t want to spend more on gas than they did on their house payment every month. Toyota increased its Prius line to four different options, and also began offering its regular lineup with the option of a gas-saving hybrid engine. For the 2014 lineup, Toyota offers a hybrid model of the luxury Avalon, the classic Camry sedan, the massive Highlander SUV and the RAV 4.

Hybrid Cars for Everyone

Even though Toyota may be the brand that most people associate with the history of hybrid cars, most of the world’s automakers have followed suit. Drivers looking to up their MPG and/or reduce their carbon output now have, at a rough count, around 70–yes, you read that right, 70!– hybrid models to chose from. And that’s just the gas/electric hybrids–that number doesn’t include the all-electric cars, plug-in models, natural gas vehicles, etc. (More on those later, stay tuned…) Hybrid engines are no longer considered exotic. They are available in the car brands and models that have been around for years. There are now hybrid versions of many recognizable cars that we’ve been driving forever–including the Volkswagen Jetta, Chevrolet Impala, Honda Accord, Ford Fusion, Audi A6, Infiniti LE, Nissan Altima, Hyundai Sonata, Lincoln MKZ–and that’s a just a short list. The evolution from a regular version to a hybrid car version is often only visible in the car’s logo badge, which often ads a bit of blue or green to the original logo to signify the hybrid car status.

If you need to go big, or go really big, many trucks, crossovers, and massive SUV hybrids are out there for you. They won’t get you a membership in the Sierra Club, but they can take a big, heavy beast of truck and put it just barely into the 20 mpg range instead of the single digits–so hey, that’s progress. Some to note for 2014 include Toyota RAV 4, Nissan Pathfinder, Subaru XV , Toyota Highlander, Volkswagen Touareg, Cadillac Escalade, GMC Yukon, Lexus RX, Porsche Cayenne, Chevy Tahoe, and the GMC Sierra, the lone 2014 hybrid pickup truck available as of this writing.

Sports cars, as a rule, are built for speed and fun, not fuel efficiency. And even now, buying a high-performance sports car, even with a hybrid engine, is not going to put you in the 40 mpg club. But hybrid engines are now being offered in many sport models, including some that will accelerate fast enough to take your breath away. 2014 hybrid engine sport offerings include the Honda CR-Z, Porsche Panamera, Lexus LS, the BMW 3-Series, Mercedes E400, and the amazing Lexus LS 600hL–aka the most expensive and most powerful hybrid in the world, starting at about $120k.

So it appears that the electric-gas hybrid car engine is here to stay. But is it the end game of engineers looking to make our fossil fuel guzzling ways as antiquated as mom jeans and the rotary phone? By no means! It’s only a beginning. In the coming months we’ll look closer at all-electric cars and hydrogen fuel cells. Stay tuned!

Also see:
Why Buy a Hybrid?
The 40 Mile High Club