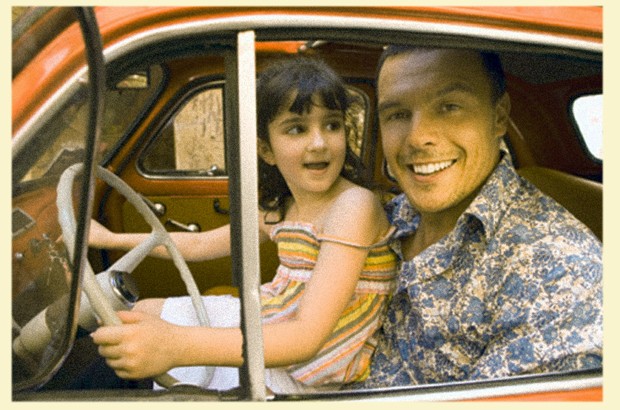 For many of us, dad was the one who taught us to drive. Thanks, dad, for having nerves of steel, and for helping us obtain that first milestone of independence: a driver’s license.

There’s no denying the bond between fathers and daughters. At 42, I’m still daddy’s little girl – the baby of the family – the last of his four kids. By the time I was born, Dad was 45 – his eldest daughter was 18 and away at university. I was an accident. But he didn’t throw in the towel. He taught me the important lessons in life, like how to drive a car. By that time he was in his sixties with patience running thin. Yet, he still endured endless hours in the passenger seat of his top-of-the-line 1982 Chevy Malibu Classic station wagon while I put it through the ringer and tested his limits, too.

Once, he grew so frustrated, I begged him to let my best friend take me driving in the wagon. Reluctant, perhaps secretly relieved, he agreed. I grabbed the keys, jumped in the Malibu, drove two blocks by myself to her house and then we hit the open road. For hours we cruised around, driving to nearby Niagara Falls (I live in Canada) – my first venture on the highway – savoring my new-found freedom. But things went wrong on the way home when I practiced parallel parking the big beige boat. I yanked the wheel too far, pressed the gas pedal too hard, and hit the curb. Ignoring the screeching sound of scraping metal against pavement, the tail pipe, once poking out the rear, was totally bent and lodged against the rear tire. Only a crow bar could set it free. The result: a $200+ repair bill for a new muffler, tailpipe, and clamps. Dad didn’t say a thing – even though I tried to hide it from him.

Guess why teen car insurance is so expensive!

When I got my license, dad’s Malibu was at my disposal 24/7 because he relied on his Ford F-150 truck. I drove to school even though I could see it from my house. I jammed the car with friends to go shopping in the US or out on the town. Once I drove into a ditch and blew a tire, taking a corner too quickly enroute for ice cream between classes. I lied; I told dad it happened in the school parking lot, which was under construction. I didn’t get away with it. He simply said in broken English (he’s Italian!!!), “BS. You drove into a ditch.” And he never spoke of it again.

At the university, I didn’t take the car, but I got a better deal – Dad, my personal chauffeur/mover. He moved me to a different city every four months for five straight years as part of my co-op English program. He already knew the ropes – he made the exact same trek with my older sister five years beforehand. I added another two years for grad school, an 8-hour drive away from home. Still, he made the trek in his grey ’89 F150 without any reservations.

Looking back, I was a nightmare. I gave him every grey hair on his head, which didn’t happen until his mid-70s, he constantly reminds me. Now, Dad is 87. The roles are reversed and I’m his primary driver. Although he still has his license, he stopped driving after a horrific accident six years ago. Severely burned from a grass fire gone horribly wrong, he endured endless months in hospital and 13 surgeries – one of a handful of men over 80 to survive third and fourth degree burns from his waist to his ankles in Canada. Life has changed drastically. He can’t dance the Italian tarantella anymore, go on trips with the guys, or drive anymore. His white ’99 F-150 sits parked in the driveway, fully insured but rarely driven. To him, driving is a loss of his manhood. After the accident, he complained of his inability to do the simplest tasks, like driving his wife of 60+ years to the grocery store, to a doctor’s appointment, or to visit friends.

He has only driven once since that fateful day. I forced him. One day, I just pulled over on a country road and told him to drive. He cursed me – a long list of Italian profanities – and then slowly made his way to the driver’s seat when he realized I wasn’t kidding. He fired up the engine, made the sign of the cross, and hit the throttle hard. Within seconds tears streamed down his face. And mine. It all came back to him – like riding a bike. He drove around the country roads like old times, laughing and chatting for nearly an hour before going home. Beaming with pride, I could sense his relief, his happiness, his freedom, and his manhood return. He hasn’t driven since then – he has no desire to – he just needed to know he could.

It’s still hard for dad to accept help and even a ride. He’ll refuse a lift to the barber, saying he’ll make the three-kilometre-trek with his walker in hand. I never let him do it. I know deep down he still feels like a burden on his kids and wife. He’s anything, but. He’s my inspiration – my pillar of strength and courage – my campione, which means champion. I owe him for a lifetime of unconditional love and putting up with all my stunts.

Ultimately, I owe him for my career and all those driving lessons that landed me on this wonderful road to becoming an auto journalist. But I wish he would accept one simple fact – I love driving him around. That’s our special time together where we reminisce, reconnect and relive the past, talking about neighbours new and old, upcoming construction projects, and the growing vineyards replacing orchards near the farm. All things change, but remain the same.

The road is often difficult and not what I wanted for Dad at this stage of his life, but we drive ahead, hoping to make the bumps and potholes along the way more bearable. No one knows what lies around the next bend, but all I can say for sure is we both enjoy the ride in his old F150, proudly displaying in excess of 360,000 kms on the dash, more than any other fancy, new car. It’s a symbol of dad – it sits parked stoically in the driveway – a testament of his strength, courage, and willpower – built Ford tough just like him. I hope one day he sees himself the way I do – that’s my wish for him for Father’s Day.