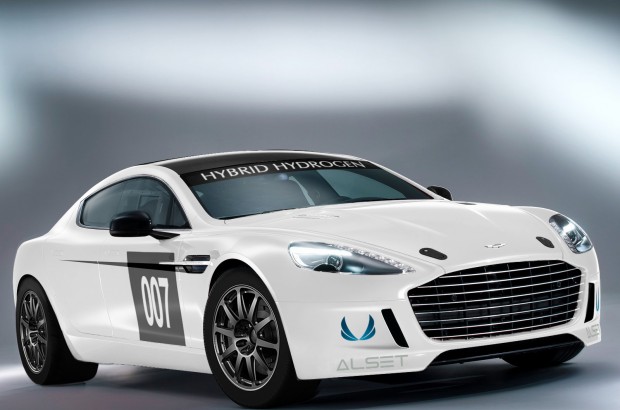 Green Hell Goes Green: Pedal to Metal to Save the Planet

Hidden deep in Germany’s Eifel Forest is one of the legends of the racetrack world. 13 miles long. 985 feet of altitude change. 170 corners. This is the Nurburgring Nordschleife. It is sometimes called the Green Hell–a name that comes from being both notoriously dangerous to drive, and surrounded by green forest.

It could have been called the Green Hell for another reason–with all those gas-guzzling speed demons zooming around, you could call it a tree-huggers worst nightmare. No amount of carbon offsets can compete with a formula one race car. They’re built for maximum speed, not maximum eco-friendliness.

History was made on Saturday, April 27th as the first ever lap of the famous track was taken that boasted zero carbon dioxide emissions. That’s zero, as in none. This amazing feat was accomplished by the engineers of the prototype Aston Martin Hybrid Hydrogen Rapide S, which is powered by hydrogen, and emits only water. The car’s engine can use gas as well, but didn’t use it for this particular jaunt around the track. It was a perfect test run and shake-down session for the car’s next challenge–a formal record-breaking attempt at the grueling 24 Hours of Nürburgring (N24) race next month, in which the Hybrid Hydrogen Rapide S will line-up alongside a world-class field of 200 other racing cars.

In a James Bond movie of the future, will we see a new eco-friendly 007 lowering himself one-handed from a moving helicopter into a speedboat wearing hippie Birkenstock sandals and an organic hemp sweater? Let’s hope not–there’s still something to be said for that sharp-looking tuxedo. But could he race through the winding European cobblestone streets in gorgeous Aston Martin that emits no damaging CO2 into the atmosphere? It’s quite possible!

One Response to “Green Hell Goes Green: Pedal to Metal to Save the Planet”