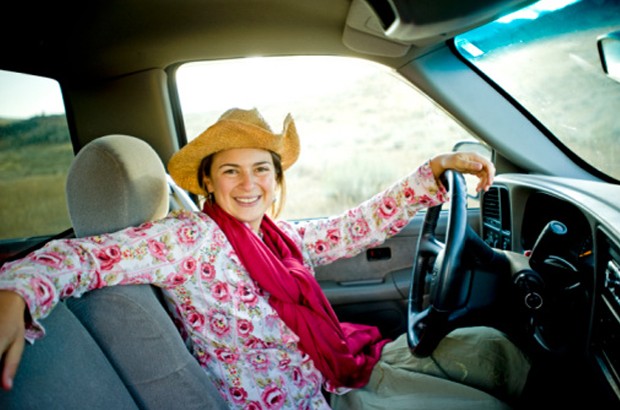 Maybe you live on a farm, or haul horses, or you’re a water baby and speed boats are your thing. GMC and Chevy gave VroomGirls a peek at the 2014 big pickups that will go on sale mid-year. Yeehaw! Ride ’em cowgirl!!

My Tow Hitch Is Bigger Than Yours

You are not the kind of gal who waits around for a man to do her bidding. No, ma’am. You can get down and dirty with the most macho guy, and we don’t mean that in a nasty way. You haul bales of hay, you shoe horses, you repair fences and you need a truck that works as hard as you do. But you’re also a dainty flower at times. Why not have a truck that tends to your softer side, too? GM gave VroomGirls a look at the completely redesigned GMC Sierra and the Chevrolet Silverado. No retiring wallflower, these. Both pickups are able-bodied, tough workhorses, and yet packed full of creature comforts and little luxuries like quieter cabins and available heated seats.

Fancy, in a truck way, the 2014 GMC Sierra is the “I’ve arrived” ride for the horsey set. The GM folks call it Professional Grade. You’ll call it tough and dependable with an eye for fashion. It has a bold new chromed grille, LED headlamps and soft-touch premium materials throughout.

To keep you connected, you’ll find USB ports and Bluetooth connectivity, a nice-sized 8″ touch screen, and three electrical outlets. Audio buttons and climate controls are separate, to make things less complicated, and they are easy to manipulate, even with gloves on! Frosty mornings and ranch work – not a problem. Seating (with optional heating) has attractive contrast stitching, and underneath the padded cushy center armrest, there’s a file folder system that’s also large enough to store a laptop. Here, your office work gets done in a pleasing and accommodating environment.

The Chevy Silverado gal likes her things a bit more rugged. She might even be restoring an old car or motorcycle in her garage. And her ride has to be able to haul heavy gear, maybe jet skis, or even a camper trailer. The 2014 Chevrolet Silverado is made with a stronger cab than before, which improves its safety and durability. Like the 2014 GMC Sierra, the Silverado comes with pretty contrast stitching on seats, soil-resistant fabrics, and easy-to-clean rubber liners in storage bins.

The 2014 Chevrolet Silverado, which will debut in fall of this year, gets an updated front fascia, with a honeycomb grille, loads of chrome on the grille and bumper, and fancy projector headlamps. The interior has real aluminum trim, which feels substantial and cool to the touch, unlike chromed plastic, which may look good but feels cheap.

Both vehicles come with new engine choices, including one 4.3L V6 and two new V8s – a 5.3L and a 6.2L. A CVT direct injection technology deactivates cylinders during cruising speed to maximize fuel economy. This means that at speed, while driving on the highway, the engine could switch from six cylinders to four, giving the vehicle four-cylinder fuel efficiency. But those six cylinders are at the ready, should you need to stomp on the gas.

For both models, the cabin is quieter than outgoing versions, and the rear doors are longer to make loading and unloading the vehicles easier. An auto-locking rear differential offers better traction along muddy or gravel roadways, and a Hill Descent Control means the vehicles won’t roll backwards after stopping on a hill. There are also a myriad new safety features available as options, like including lane departure warning systems and a Trailer Sway Control feature. Both the 2014 Chevrolet Silverado and the 2014 GMC Sierra come in two crew cab sizes: 5’8″ and 6’6″. There is also optional LED lighting available under the rails of the pickup box to make loading easy to see at night.

The 2014 Chevy Silverado and 2014 GMC Sierra are so tough, you’ll be able to put them through their paces in your daily routine and they’ll still be healthy enough to pass on to your kids when they’re ready to drive.