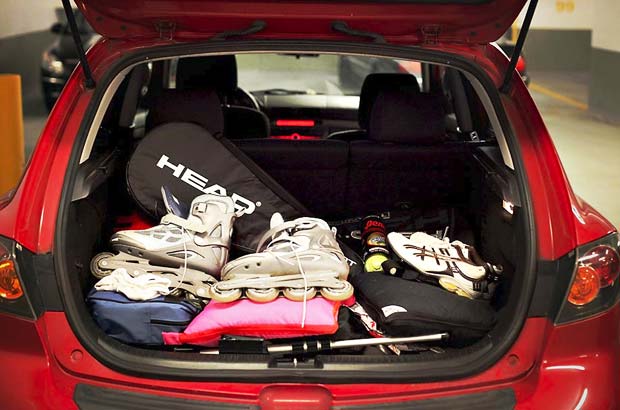 Save on Fuel: Get the Junk Out of Your Trunk

Less really is more when it comes to savings on fuel costs.

When the speed limit says 65 mph do you automatically accelerate to 70 or 75? Would you consider turning your air conditioning off on even the hottest of days, opening your car windows and letting the wind buffet your hot body? Well, get ready, this is what fuel efficiency is all about. If you want to save fuel and save the planet you just might have to sweat it out. I caught up with John and Helen Taylor, the world’s most fuel-efficient couple, following their 23-day drive across America that ran from August 5-22. They had just set a new world fuel efficiency record with Shell having averaged 64.42 miles per gallon in an unmodified, non-hybrid gasoline vehicle throughout their 48 state journey.

Simple facts: their final mileage for the trip was 53.39 percent greater than the Environmental Protection Agency’s (EPA) estimated highway fuel economy for the vehicle they drove. Even more impressive, it trumps the minimum requirement of 54.5 mpg announced by the government for passenger vehicles to achieve by 2025. The Taylor’s drove the 2012 Chevrolet Cruze Eco with a turbocharged 1.4-liter engine, which achieves an EPA-estimated 42 mpg on the highway.

“It’s quite tiring; we’ve driven 9,564.2 miles in 22 days,” explained Helen, who said that they have broken 89 world-driving records, 43 of which were for fuel efficiency, over the last 32 years. The test this time was part of the Shell Smarter Driving program, launched on August 1, to demonstrate to everyday drivers that they can use simple tips to stretch their fuel and budget. Following the program rules, the Taylors were able to go the distance fuelling the 12.6-gallon tank (with Shell Nitrogen Gasoline) only 12 times along their route. So, what is a couple that wins fuel efficiency contests like? One might think they’d be boring eco-heads …but actually, this duo that hails from Australia were full of wit and energy. They talked to me by phone from their hotel room somewhere between Las Vegas and Los Angeles. Just outside their room was a huge shopping outlet. The couple were preparing to “have a bit of a look around to take things back home to their family in Australia.”

As well as not overloading the cargo areas of their vehicle (all that junk in the trunk really must go!), the couple also drive 5 mph under the legal speed limit. “A lot of people go 70 to 75 mph in a 65 mph limit (guilty, as charged). Just stick to the legal speed limit and everyone will have a savings,” he advised.

And the radio? Oh, no problem with that. “You should hear Helen singing along with Pavarotti and Barbra Streisand.” The Australian couple started their fuel initiative in 1979 because people were struggling to pay for gas. “When you break a record and you get publicity that helps,” said Helen. “We are two people very passionate about what we believe in and we want to get the message out to a very large audience.”

They claim to receive 4,000 emails a month to their website with questions asked and testimonials posted. “People say they save $800 to $2,000 a year and with that amount it makes a very big difference to their lives,” explained John. “We work with Shell because they are an energy company with the same passion as we have. They are trying to educate the whole world about saving gas and money.”