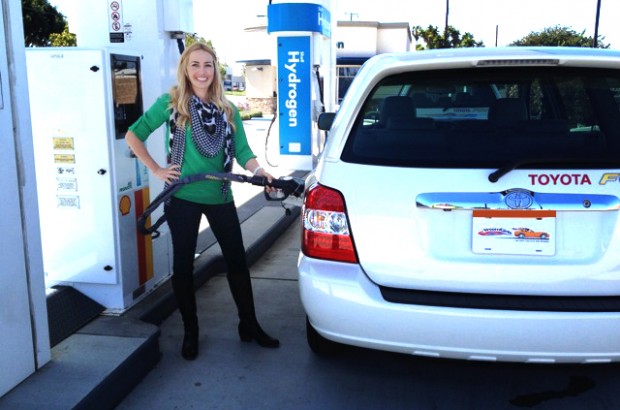 Fuel Cell Technology Is Her Obsession

Jackie Birdsall, an engineer at Toyota Technical Center, is “obsessed with bringing fuel cell technology to the world.”

Obsessed is usually a word one uses for video games or binging on Netflix series (like Orange Is the New Black), but Birdsall is passionate about fuel cell technology.

Birdsall and her partners on the Fuel Cell Hybrid Vehicle team are working on ways to reduce fossil fuels in automobiles and finding innovative methods to make hydrogen fuel cell technology affordable. The fruit of their work will come to life in 2015 when Toyota’s FCV hits the markets in California, Japan and Europe.

Birdsall started her love affair with cars when she was a teenager growing up in Sacramento. She modified a friend’s Honda Civic. Her first car was a 1987 Camry. “It was silver, and it was a little embarrassing to drive to high school because I did not go to high school in 1987,” she says. “The car was born three years after me. But I ended up loving it.”

Smitten with automotive history and icons, including Henry Ford and Lee Iacocca, she attended Kettering University in Flint, Michigan.

“They had great classes,” Birdsall noted. “You get to learn metallurgy and welding and the applied math and theory behind how an engine works. I got so excited about it. It blew my mind. I just wanted to work with vehicles.”

She stumbled upon Daimler-Chrysler’s fuel cell technology prototype during a 2003 internship.

“So I can work on a car that has zero emission, that uses fuel you can make from any domestic resource, fills up in a matter of minutes and can completely replace the internal combustion vehicle?” she recalled. “I became obsessed.”

“I work with our very talented team of engineers to ensure the fuel cell technology vehicle is ready for the North American market. This includes everything from drivability to regulatory compliance,” she explained. Birdsall also represents Toyota on a number of codes and standards committees.

“Right now, I have the best job in the world…” she remarked “I’m going to lose my mind when the first vehicle rolls off the production line. To be talking about a full commercial launch, that’s pretty much the biggest victory I can have in my life.”

I wanted to know more about this passionate woman, something beyond the corporate talk, so I asked Jackie the following questions by email:

HR: Do you have any other obsessions besides cars?
JB: I feel like ‘obsession’ can have a negative connotation sometimes. With that said – one of my highest priorities, besides my career, is making time for my family and friends. That and watching hockey, which luckily I can do with family and friends.

HR: What else do you do on your off time?
JB: Anything that allows me to be outdoors and pushes me on a physical level. Depending on my geographic location I will do whatever I can do fit in beach volleyball, surfing, hiking, wakeboarding or snowboarding.

HR: What do you drive?
JB: I drive a Lexus CT200h. It’s a hybrid, which fits my surfboard (and lifestyle) beautifully. Her name is She-Ra, if you were wondering.

HR: What is your favorite color?
JB: Green.

HR: Can you put a piece of IKEA furniture together?
JB: Funny you should ask. When I first moved to LA I picked up some furniture that IKEA recommended two people assemble. A few hours later (and a few glasses of wine) I had a new desk, TV stand, and bookshelf that I assembled with nothing but an Allen wrench and a wall. Take that, Swedes!

HR: Are you a computer “geek”?
JB: I beat Warcraft I, II, III and the extension pack as both humans and Orcs – so it’s safe to say yes.

HR: What TV shows do you like? Movies?
JB: Top Gear, obviously (the BBC version). My favorite movie right now is a foreign film called “The Intouchables”. I don’t know why – it just makes me happy.

HR: What’s next for you after the FCV launch?
JB: The next generation FCV!