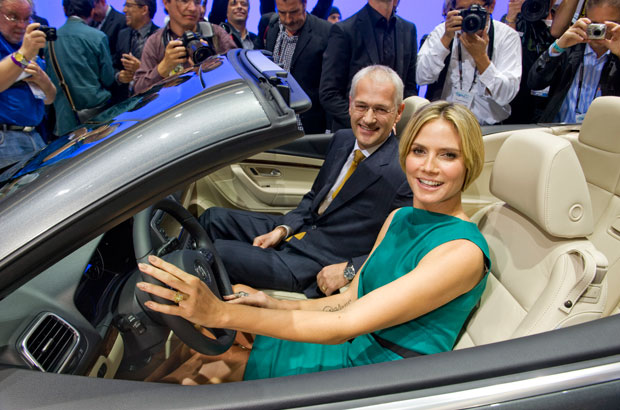 VW Style: From Beetle To Beast

Volkswagen has long been an enthusiast brand. 1960s Surfers loved the VW bus, co-eds the Beetle, and more lately, kids of all ages have raved about the brand’s sporty models like the Golf and Jetta. Now, with an expanded array of grown-up cars, and the help of style icons like Heidi Klum, is VW poised to gain market share over biggies like Ford and GM? Its own VW Style will be a key.

Herbie The Love Bug Wants You!

When you shop for a car, do you think about Volkswagen right away? Some of us do: people who love a sporty drive feel, Gen X and Gen Y, who are seeking Euro styling on a budget. But many of us haven’t had much experience with this German automaker’s vehicles. And yet, VW is the number one selling brand in many countries worldwide. Now the company is setting its sights on us.

By 2018, Volkswagen wants to be the number one global automotive brand. According to statistics, that goal is not a long shot. But are US car buyers ready to buy lots of VWs??

“Americans are certainly unfamiliar with how huge this company is,” says Rebecca Lindland, director of research IHS Automotive, a company that provides analysis of the world’s automotive markets, “But, when VW puts their mind to something and says they want to be a global leader, it is distinctly possible that this can happen.”

According to IHS global research, VW sold 7.1 million vehicles in 2010 and 8.2 million in 2011. However, Lindland notes that while VW is a very well-established brand worldwide, it isn’t on the minds of most Americans.

The company is poised to change that.

So Many Cars, So Little Time

Jonathan Browning, President and CEO, Volkswagen Group of America (which includes Audi, Porsche, Lamborghini and Bentley – yes, they are all owned by VW!) explains, “When we laid out our plan for the Volkswagen Group of America in 2007, VW and Audi combined were selling just under 200,000 per year. That number has increased and we are putting in place foundations that will profit growth over time.”

Since 2009, Volkswagen has invested $4 billion in the US to grow their operations. That expenditure includes $1 billion to build a LEED-certified Tennessee manufacturing plant (it now makes all of the Passats sold in the US, and has capacity to make other models in the future) and $3 billion towards future product development. Having a factory in the US gives VW the ability to avoid international monetary fluctuations (which can cut down on profits) and also creates thousands of substantial jobs for Americans.

“The VW brand in the US has a history, but it was falling off the shopping list,” says VW’s Browning. To boost sales, VW has dropped its prices on models like Jetta and Passat. Lindland feels the US market is ready for more VW’s. Part of the reason: American demographics are changing.

“For the last 40 years everything has been targeted towards baby boomers,” a segment “that preferred Japanese cars. However, baby boomers are losing their market dominance and that’s what we all need to be aware of,” she adds.

With Gen X, the 36-46 year old crowd, and Gen Y, the under 35 year olds, both coming on the scene, the buying audience is different.

“VW has been a preferred brand of Gen X,” explains Lindland. “In particular, the Jetta has been very well received for every buyer under 45 years old. And Gen Y will present a big opportunity for VW as well as the ‘Big Three’ (Ford, GM and Chrysler) plus Hyundai and Kia.”

Ask Your Kid About It

VW is staying in the fast lane with fun advertising and edgy marketing; teaming up with musicians including Katy Perry and the Black Eyed Peas and riding the Star Wars wave.

On that note, this was VW’s third year paying big bucks to advertise in the Super Bowl. Last year the Passat Star Wars spot had over 49 million views on YouTube.

Browning adds, “It’s the whole thing—like becoming one of Oprah’s “Favorite Things”. We are getting VW right into mainstream America and the things people are talking about…getting it into the heart of the conversation. VW has very high levels of awareness; our big challenge is to get people to convert from familiarity to acceptance.”