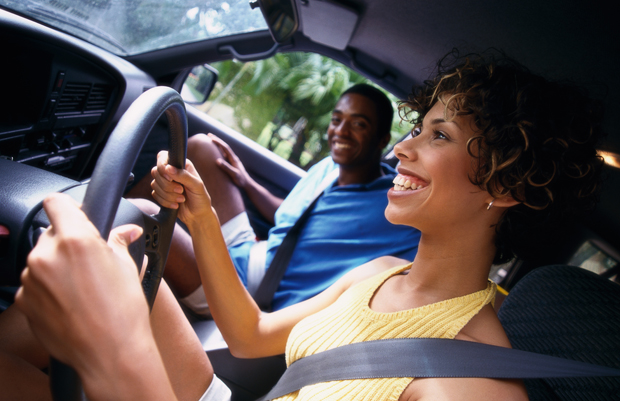 Women are gaining ground in so many male-dominated areas. We outnumber men in American colleges and universities, we sent more ladies than men to the Olympic games this summer, and now, the most surprising reversal of all – we dominate the roads too, since more women than men hold a driver’s license. Why do men no longer covet what was once a rite of male passage: passing the driver’s test?

It’s not like it’s a contest, but there’s something very satisfying about the findings of a recent study by the University of Michigan’s Transportation Research Institute that shows more women than men hold a driver’s license in the U.S.

After more than 100 years of hearing tiresome jokes about female drivers, we have finally reached equality on the road.

Women now comprise more than half of all licensed drivers – 50.3% versus men’s 49.7% share, according to the Federal Highway Administration. This translates to 105.7 million women who are licensed to drive and 104.4 million men – 1.3 million more gals than fellas. Ha, take that!

Say Adios to the Boy’s Club

So why be smug? Perhaps it’s because women haven’t always been invited to the car party. Let’s face it, when it comes to “car talk,” men seem to own the conversation and even project a certain sense of superiority on the topic. The love of cars used to be a rite of passage for men who grew up lusting, loving, fantasizing and saving up for their dream car.

The bigger issue now is one of commerce. Savvy auto makers would be wise to take women as seriously as they take men in the creation, design, marketing and selling of their cars.

Rebecca Lindland, Director of Research at the consulting group IHS Automotive, says this new statistic puts women squarely into the automotive game. “What this study says is that the role of women is now truly equal statistically. While this is certainly not the death of the muscle car, what women want and need in the value proposition of the cars they buy is absolutely essential for car companies to deliver.”

Sadly, some car companies still fail to meet the automotive wants and needs of women.

Take, for instance, the fact that American women notoriously prefer foreign cars. According to a study by TrueCar, 17 of the top 20 brands women buy aren’t from the good ole USA. This should be a huge warning sign to American automakers, say marketing experts.

Bridget Brennan, women’s marketing guru and author of the book, “Why She Buys,” judges American car companies guilty of not meeting the needs of women in designing and advertising cars. “The American automotive industry is an easy target, I realize, but is there any doubt that a lack of awareness of customer preferences has played a role in its downfall? Detroit has clearly and painfully missed the boat on changing consumer tastes in the last few decades, including female tastes.”

The Power of the Female Shopper

The trend of more female drivers mirrors a growing self-reliance among women. “More single, divorced, retired and educated women are heads of their household and they care deeply about balanced spending, and sometimes liken cars to an important household appliance,” says Lindland

Marketing guru Brennan says it’s getting more attention by companies that didn’t used to care because the numbers don’t lie. “The economic benefit of reaching women is becoming a massive opportunity for brands. Every conceivable industry is being challenged to create products and programs with female appeal, particularly in gender-neutral or traditionally ‘male’ categories such as consumer electronics, insurance, finance, and, yes, automobiles.”

Notice to Cars: He’s Just Not That Into You!

And what of men who are shrinking back when it comes to driving?

Ian Beavis, Executive VP, Global Automotive at The Nielsen Company lists any number of reasons why younger men have lost their passion for cars. “I think there are many factors including youth unemployment, staggering tuition debt, urbanization of the youth population, the high cost of cars, insurance, parking, improved public transportation and a greening of this new generations who uses bicycles more than any previous generation.”

Will Women Call the Shots?

The paradigm shift to more women drivers means that all things automotive will begin to change. Think more eco-friendly vehicles, improved safety features, and more female-focused creature comforts (yes, maybe finally, a place to hang our purses!) – all these will play a larger role in automotive product planning. It’s all related to how women view cars.

Michael Sivak, the study’s co-author, says women are “more likely than men to purchase smaller, safer and more fuel-efficient cars, to drive less, and to have a lower fatality rate per distance driven.”

What You Can Expect

The future of cars from a woman’s perspective:

We shop, therefore we park; and smaller cars are easier to park at the mall. More of us are gravitating to smaller vehicles. Yes, we still want them to have room for our stuff, and our kids’ and friends’ stuff, but women are more comfortable in a car that “fits” rather than an over-sized behemoth.

Research among female car buyers consistently shows that safety is at the top of every woman’s shopping list. In the past, this meant Volvo, which was touted for its vast assortment of safety features. Sadly, Volvo seems to be marketing more lately to men than the loyal women and families who have heard its siren sound of safety and answered all these years.

And on the topic of safety, women are safer drivers than men, getting in fewer traffic accidents. Statistically, men are twice as likely to indulge in risky behaviors like drinking and driving, to not wear seatbelts and to cause fatalities. Not happy news, but it’s good to know the streets are becoming safer thanks to us. The better news is that, for both sexes, fatality rates have been declining in the past ten years.

Whether or not the car industry ever truly embraces the female consumer, there’s no stopping our buying power and our obsessive shopping habits. As an industry, it may be the last holdout, but, like all businesses, they must move toward listening to their female customers. Lindland agrees, “The car industry as a whole is not yet taking gender seriously, but it is better than it was years ago. This kind of data is a good reminder to the decision makers in the car world to see women as serious consumers.”