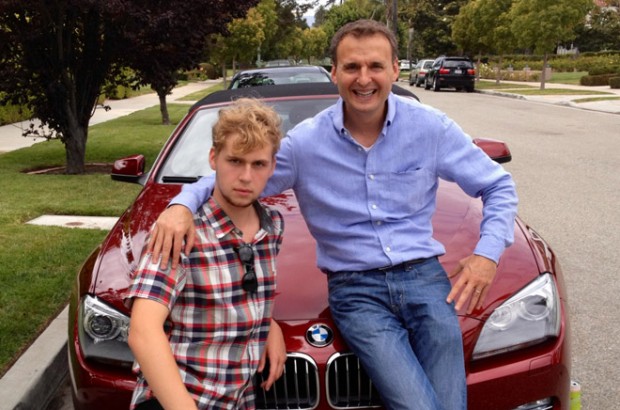 Everybody Loves A Road Trip!

The creator of “Everybody Loves Raymond” takes a sentimental drive up the California coast with his teenage son in an eye-catching red BMW 640i convertible. Two things happen: the road trip reconfirms how much he loves his son, and he discovers an affection for cars he never knew he had.

Driving in Cars With Boys

Let me begin by saying, “I don’t know anything about cars”.
I’m from New York City originally, and having a car there is about as smart and convenient as having a donkey. So when we moved to LA, the car ownership thing was novel, and a bit nerve wracking. But then, I started to appreciate the freedom. Freedom from the subway in August. Freedom from being smushed into public transportation like a sat-on-sandwich. I now had, literally, freedom of movement.

And all this could be found in my first car, a 1990 Plymouth Sundance. My father had to co-sign the loan. It had everything I cared about: air-conditioning and a tape deck. Twenty-two years later, I can add to the qualities in a car I care about: the GPS. Because I’m old now, and easily confused.

I have a son, Ben, who’s about to turn eighteen, and I guess I care about him too. I care so much about him, and he’s such a good boy, that I want to spend as much time as possible with him. This is hard to do. He has a girlfriend. He has an active social life. There are parties and video games and laughs and god knows what else the kids today do, all competing with me, an old and confused guy. And he also loves cars– has the magazines, goes on the websites, watches Top Gear (Even I love that show. Is there a better produced hour of TV in the world?)

“Road trip” I yelled one day, thinking this would have the same sense of fun and excitement as it did in 1978.
“Who”?, said Ben.
“You and me!”, I replied, like an excited coot. “We’ll go up the coast and look at the schools you want to see in San Francisco”.
“Oh”, said Ben. “Yeah, O.K”
He’s so nice. That’s what a nice boy says who doesn’t want to hurt Pa’s feelings.
A few weeks go by, and I’ve been planning. I go to tell Ben my ideas. Turns out he’s not really interested in San Francisco schools anymore. He’s only really interested in NYU.
“Oh”, I say, “Want to go on the trip anyway? We can eat.”
“Um, sure”, says the very nice boy.

This is a big deal. The only time we can go is four nights the week before he takes off for camp, which will take him away from the friends and the girlfriend for the rest of the summer. This is precious time for him. But also for me. He goes off to college next year. How can I sweeten the deal for the teenager?

A red BMW 650i convertible pulls up in front of the house.
No, I didn’t buy one…yet. My dear friend Tara Weingarten, editor of VroomGirls, has arranged for BMW to loan us the car for this very special road trip with my son. When he sees the 640i convertible, Ben lights up like… a teenager with a hundred thousand dollar car.

And off we go, music up, top down, onto the open road. Right away, I’m cold and need my hoodie. But, the power and the comfort of this thing is a joy. I notice it’s better than the Sundance. It has the GPS. It has it’s own iphone/ipod connector (another thing i care about now).

It feels good. And we talk. And we laugh. And we even get serious. The drug talk. (I’m against them). Do I know if what I say makes an impression? Who the hell knows? I’m grateful for the chance to be heard, for the quality time.

First stop is Santa Barbara and La Super Rica, arguably the best tacos anywhere, Julia Child’s and my personal favorite. Ben’s excited. And we pull up… and it’s closed. Closed on Wednesdays. I didn’t check. I assumed things. I’m a lousy father. We eat burritos down the street at Not Super Rica.

But we stay over at the Inn of the Spanish Garden, very nice, and head out for Big Sur in the morning. This drive, on Route 1, is a must for anyone who enjoys spectacular. It’s on a level with the Amalfi Coast, and to share the “ooh!”ing and the “wow!”ing and the “look out for the edge!” that’s around every curve with your son in a sweet convertible is… cement.

We arrive in Big Sur and stop for lunch at Nepenthe. I’m going to say something now that may be controversial: this is the best hamburger in the world.
I’m factoring in a few things:
1. A very, very good hamburger– fresh, really tasty, on a soft, beautiful roll.
2. The seat. A picnic table with a bench on only one side, because the other side is a cliff– down to the Pacific, and the view is magnificent, like a painting, or an IMAX nature thing.
3. The company.

They cover your french fry basket with a napkin because there’s a blue jay that swoops in and likes their french fries. He has good taste.
The whole Nepenthe experience is a little more cement.

We stay at another hyperbole- laden place: The Post Ranch Inn. And this is the single most incredible hotel/resort I’ve ever stayed in America. A hundred acres– Ben and I hiked! Hiked! We don’t hike. The word alone is anathema to the boy. But we worked up a sweat, shlepping through the majestic redwoods, up the hills, we saw deer– a young buck with antlers crossed right in front of us. “That’s you, Ben”, I say, because I’m such a wit.

Our room is built into the cliff, at cloud level, the sunset is amazing. It’s a romantic place, and I’m here with my son. Imagine the girls I could come here with. Or more realistically, he could, if he had a job. I decide I’ll bring my wife back here, who will enjoy the complimentary wine in the room.

2 Responses to “Everybody Loves A Road Trip!”