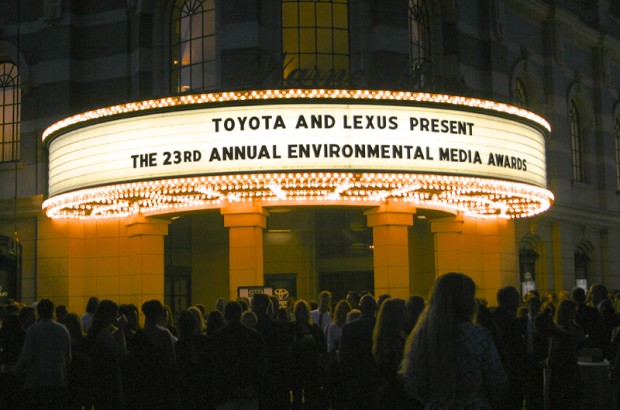 Hollywood award shows are a lot like your high school prom. Everyone gets dressed up, and there’s always buzz about who came with whom. There’s usually a theme, and awards are given out for the best looking and the most popular. But there’s one tinseltown awards show that exists to promote a cause above and beyond getting on the best dressed lists. The Environmental Media Awards honors those in the entertainment industry who have used their medium to promote the greater good–specifically, by increasing environmental awareness.

Toyota and Lexus sponsored the 23rd annual Environmental Media Awards, or EMAs, which was held at the Warner Bros. Studios. From the start, attendees can see it’s a little different–stars walk the green carpet, not a red one. Instead of the usual “who are you wearing?”, celebs are asked which environmental cause they are supporting. Glee heartthrob Darren Criss opened the show singing “What a Wonderful World” while playing along on his guitar. This year’s presenters and award recipients included many stars of stage and screen, including Daryl Hannah, Lance Bass of ‘N Sync, Marissa Tomei, and Modern Family’s Julie Bowen.

Two of the night’s biggest awards went to a couple of actors who have shown long-term commitment to the environmental causes that are important to them. Matt Damon was honored for his ongoing commitment environmental causes. Several of his films, such as Promised Land and Contagion, have raised public awareness of environmental issues including the dangers of “fracking”. On a more personal level, Damon is the co-creator of water.org, an organization devoted to helping provide access to clean water for the 780 million people in the developing world who lack it. He offered an impassioned account to the audience in attendance of his time in Haiti and Africa, where lack of accessibility to clean water is not only a health risk, but one of the main hurdles to educational opportunities for girls.

The Environmental Media Awards Futures recognition went to actress Hayden Panettiere, star of the hit TV shows Nashville and Heroes. Although still very young, she has been passionately involved in protecting marine life since the age of 17, when she went to Japan to protest the slaughter of dolphins as seen in the film The Cove.

“Twerking is not going to solve global warming,” Panettiere joked as she accepted her award. “It might make it worse”. She encouraged social media users to use the media to spread the word about environmental causes, instead of the superfluous details of celebrity gossip.

Other Environmental Media Awards were given to individual movies and television episodes that have used the media to promote awareness about environmental issues in their programming. Some of the winners and nominees included an episode of Last Man Standing entitled “Mother Fracker”, TV drama Dallas for highlighting the benefits of using methane gas, House of Cards for exposing the fallout of war and politics on environmental efforts, and Modern Family for encouraging tree conservation.

Toyota and Lexus are no newcomers to using the media to promote an eco-friendly cause. In addition to being a long-time sponsor for the EMAs, they have been leaders in using product placement to increase awareness of their eco-friendly hybrid cars.