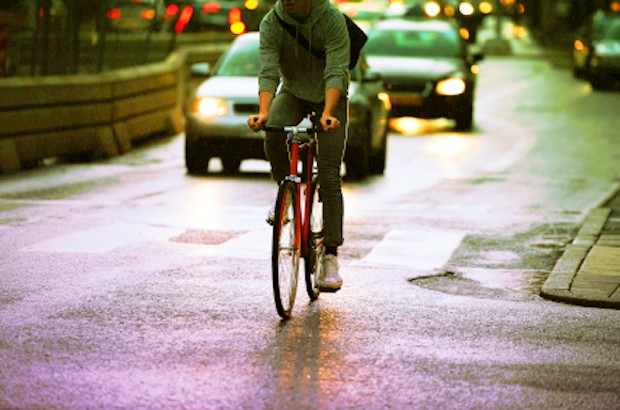 Have you ever been startled by a hybrid or electric car creeping up on you at low speeds? A new proposed law may use recorded engine noise sounds to give you a heads up.

Is this thing on?

Remember when the first hybrid electric cars started rolling out? Many drivers noticed how quiet the engine noise is at slow speeds, as compared to a traditional gas-powered engine. New drivers would often think they had stalled at a traffic light, or when creeping along a low speed. Not that the noise was missed necessarily–the whisper quiet can make you feel like you’re in a super stealth mode. Since stealth bomber planes are notoriously hard to acquire, the electric and hybrid cars might be the closet many of us get to being sexy, cat-suit clad super spies, even if you’re just sneaking up and surprising a friend at Starbucks. This phenomenon was celebrated in the witty viral video, “It’s Gettin’ Real in the Whole Foods Parking Lot”. As quinoa-eating, master-cleansing DJ Spider says:

I’m riding slow in my Prius
All-leather, tinted window (you can’t see us!)
Everybody’s tryin’ to park, you can feel the tension
I’m in electric mode, can’t even hear the engine.
My timing’s perfect, I’m creeping up…

But while these quiet engines may be great at reducing noise pollution and your gas bill, the lack of noise makes detection of the vehicles much more difficult for pedestrians, cyclists, and other drivers. Congress passed a Pedestrian Safety Enhancement Act in 2010, which mandates that all cars make a certain amount of noise to alert passersby. In response, U.S. Department of Transportation’s National Highway Traffic Safety Administration (NHTSA) is proposing that hybrid and electric vehicles meet minimum sound standards in order to help make all pedestrians more aware of the approaching vehicles.

“Safety is our highest priority, and this proposal will help keep everyone using our nation’s streets and roadways safe, whether they are motorists, bicyclists or pedestrians, and especially the blind and visually impaired,” said U.S. Transportation Secretary Ray LaHood.

According to Kathryn Henry of the NHTSA, under this new proposal each automaker would have a significant range of choices about the sounds it chooses for its “engine noise”. Each vehicle of the same make and model would need to emit the same sound or set of sounds. Although there are certain regulations that would impose some limits, it is interesting to image the creative possibilities for manufactured sound that could be piped out of future electric cars. , Under this proposal, all of the sounds would still need to be recognizable as vehicle sounds.

They may not be as personalized as the ringtones on your cell phone, but they could differ from the sounds of a traditional motor. Also, each individual automaker would be able use different sounds. So, for example, a Honda Fit could have a different sound than a Nissan Leaf. The sound would only need to kick in while traveling less than 18 miles per hour, since the cars make enough noise naturally after exceeding that speed.

Based on previously collected data numbers involving traffic fatalities, NHTSA estimates that if this proposal were implemented there would be 2,800 fewer pedestrian and cyclist injuries over the life of each model year of hybrid vehicles, as compared to vehicles without added sound.
So what do you think, Vroomies? Good idea? Bad idea? You can weigh in on this proposed federal regulation by submitting your thoughts on this government website for the next 60 days. Let your voice be heard, even if your engine noise might not be.