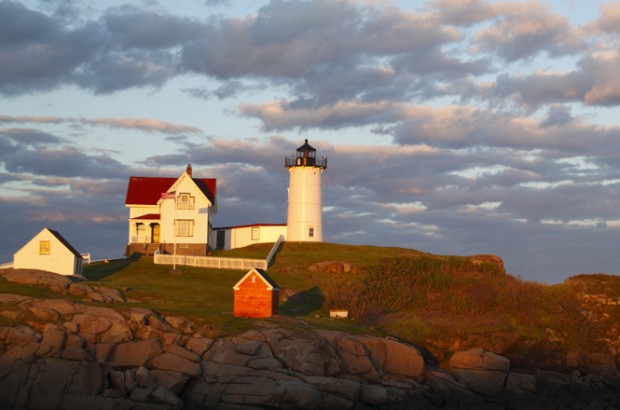 A New England road trip made for romance. Pack a camera and a blanket and take in the Northeast’s natural beauty.

Nautical. Nostalgic. The salty northeast — from the tip of Maine south toward Connecticut — is a hybrid destination that disarmingly displays its coastal charm against a backdrop of rugged inlets and coves. For most, it’s love at first sight. Not unlike that sly-smiling mistake you met in 1998.

Get lost in the wooded trails of Acadia National Park. Soak hardtack crackers in a bowl of steamy, thick clam chowder. Muster up your inner Meryl Streep and makeout under one of dozens of covered bridges. We’ll let you in on a secret — there’s something about the cool, nor’easter winds that make New England ripe for romance.

On the eastern edge of Maine’s Mount Desert Island, you’ll find the sleepy tourist town of Bar Harbor. Quaint in the kind of way that most New England towns are, the city offers a handful of whitewashed hotels and naturally, fabulous seafood. Take, for instance, the decadent lobster strudel served up by Café Bluefish, a buttery blend of lobster and caramelized onions enveloped in homemade boursin cheese.

What’s most appealing about this wonder on the water, however, is its proximity to the pink granite peaks of Acadia National Park, the first national park to be named east of the Mississippi River. When you’re not climbing rock, you’ll want to be coasting the 27 miles of scenic Park Loop Road. And when you’re ready to truly switch gears, you can explore more than 50 miles of “carriage roads,” crushed-stone lanes commissioned by John D. Rockefeller in the early 1900s, which today serve as his gift to in-the-know travelers like you and me.

Visit in the fall, when the foliage turns fiery, and reap the added awe of the Acadia Night Sky Festival. Here, the rocky shoreline turns theatric, playing host to one of the nation’s brightest Milky Way gazing opportunities. Bring a blanket, and perhaps a thermos of spiked hot cocoa to ward off the chill. We don’t want anyone catching cold on a road trip.