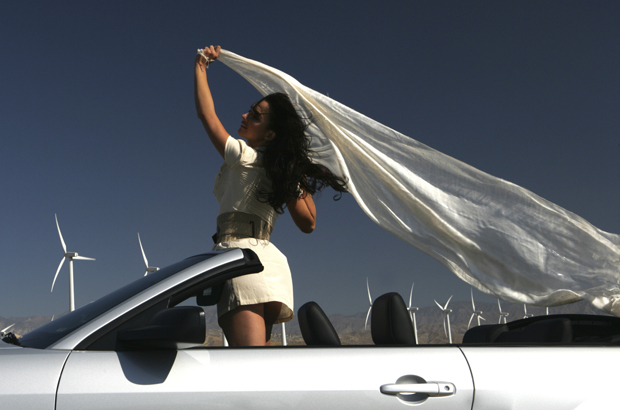 A gust of wind, and that blunt, boxy car design you love is gone. How designers put your car in a wind tunnel to drive fuel efficiency.

Does This NorEaster Make My Tail Lights Look Fat?

When you push the gas pedal and force your car through the air, your vehicle meets wind resistance. The Sisyphean act is either helped or made more difficult based on your car’s shape. You may love the substantial look of the Audi A5 but is it more aerodynamic than the oddly shaped Prius? Common sense – and your car in a wind tunnel – says no. Gorgeous doesn’t necessarily translate into efficient.

We are facing a paradigm shift in what defines automotive eye candy. Vehicles increasingly look homogeneous, as car companies industry-wide shave weight, round out edges and slim down silhouettes that allow cars to slice through air using less energy than before.

Take a look at the soft wedge-shaped Toyota Prius. It is a model of aerodynamic efficiency, proven by its elite status as the top-selling fuel-efficient vehicle for 12 years running. We are all used to its appearance now, but many of us were shocked at first by its science experiment looks. Now, even the all-electric Nissan Leaf exudes that wind tunnel design language.

“Curves and sleekness certainly lend to a better aerodynamic quality,” said Ken Paul, a Nissan product specialist. “So you get away from a true boxy looking vehicle because even though it felt good and it handled well, you were pushing against the wind.”

Obama’s stringent new fuel economy standards are forcing car designers to reconcile classic boxy appeal with air-slicing curves meant first and foremost to turn off the gas pump rather than turn heads. It’s a reality that has boxy car fans, like me (Mercedes G Wagon? Yes, please), teetering on the edge of their driver’s seats.

This year’s Chicago Auto Show featured thousands of cars of various styles, engine types and price ranges. Of the myriad options, though, Bill Zumbek couldn’t take his eyes off the 2013 Nissan Pathfinder. Zumbek, of Elgin, IL, is in the market for a new crossover SUV, and compared with the 2012 Pathfinder, the one rotating center-stage before him was drastically sleeker and rounder – a profile more akin to the wedge than the sledgehammer.

And it’s what this overall shape shift implies at the gas pump that had Zumbek so intrigued.

“The curves and the more aerodynamic wind tunnel design lead me to believe it’s going to be more fuel efficient,” Zumbek said. “I’ve got to put fuel economy first.”

In that, Zumbek is not alone.

The Hefty Price Of Beauty

Consumers are increasingly tired of high gas prices, the government is wary of foreign oil dependency, and automotive manufacturers are responding in kind, offering more and more hybrid and electric alternatives housed in inauspicious shells that say “prudent” rather than “provocative.”

Even the Ford Explorer – the nation’s No. 1 selling family SUV – has rounded out its classically edgy body design and is now offered with an optional EcoBoost engine, boasting a decent 28-mpg on the highway.

According to a White House statement last summer, the Toyota Prius – considered the Gold Standard for fuel efficiency with a combined city and highway rating of about 50 mpg – won’t cut it in a few years if it’s going to meet President Obama’s goal that by 2025 car maker’s fleets operate at an average of 54.5 mpg. Of course, no one doubts that Toyota will have that figure in the bag, as its new smaller Prius C model already gets 53 mpg in the city.

No sweat there – but that’s more than double the mileage most sedans get today.

Learning To Love The Wedge

Staunch sporty lines like Audi are rolling out hybrid models, much to the ire of their purist devotees. And Volvo is downgrading all of its models from a 6-cylinder engine to a more efficient 4-cylinder alternative.

And while some weight can be shaved off the car’s body by rounding out the rough edges, much of this work is done where the drivers’ eyes rarely wander – underneath the chassis, for example, or in and around the front wheel wells. Using materials such as aluminum, lightweight steel, and even expensive carbon fiber also help dramatically. Ultra-lightweight materials inside the car – like recycled plastic water bottles and crushed lava rock – prove fruitful on the scales, too.

But as much as consumers love saving at the pump, buying a new car is a big, emotional purchase predicated in large part on how good the car looks, and how good the driver feels once behind the wheel. What you drive says a lot about who you are – about what version of yourself you want to project outwards. So it’s sad, in a way, that fuel efficiency, and that enemy of design – the wind tunnel – is proving the harbinger of death for cool blunt lines and boxy silhouettes.