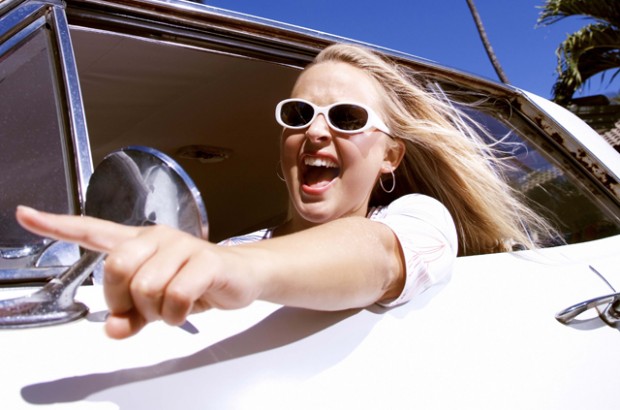 It’s a parent’s worst nightmare…Car crashes are the leading cause of death among American teenagers. And it’s all preventable. Toyota offers a free defensive driving class to teens and their parents.

I was 16 years old and driving my first car (a snazzy manual transmission Toyota SR5 Corolla with flared, bolt-on fenders) through a winter rain storm. Not put off by the chilly temps, I stopped to get an ice cream at a local market – the kind in a little cup with a wooden spoon. While maneuvering the car’s stick shift, clutch, and steering through a twisty Southern California canyon, I scooped spoonfuls of vanilla ice cream and tried to avoid puddles of standing water. Insane, right? But in the mind of a teenager, what’s the big deal, what could possibly go wrong? Defensive driving? What’s that?

I drove through a winding part of the canyon with particularly sharp curves and wet pavement. Thinking I was going too fast, I hit the brakes while in the middle of a turn. At once, the car’s back end came around and I was in a spin. Music blaring, ice cream in hand, my little Toyota and I hit two parked cars before smashing head-on into a brick wall – on the opposite side of the street! It was pure luck that no one was injured.

Now, with decades of driving experience, it’s hard to believe I was once so cavalier about driving on rain-slicked roads. But the teenage mind is ripe with bravado and jammed with distractions. Even more so today with cell phones and texting. What’s a parent to do? The answer is simple; take your teen to a defensive driving class where, among other smart tips, your kid will learn not to slam on the brakes mid-way through corners, especially when roads are wet.

One of the most comprehensive teen driving classes is the Toyota Driving Expectations program, which has has offered its hands-on course throughout the country for the past 10 years. What’s more, it’s free, whether or not you own a Toyota! The two-and-a-half-hour class takes teens through a series of distractions behind the wheel of a Toyota Corolla, and then sees how well the kids handle the stress. Instructors point out all the right things the student drivers should have done, and then they do the exercise again, the right way. Teens instantly see their mistakes and see the importance of being focused. The new drivers also learn accident avoidance maneuvers, braking exercises, and how to properly and safely navigate corners.

Parents must accompany their kids to the program, since Toyota takes the parents into a separate area to teach them how to reiterate and reinforce at home what the teens learn in the day’s defensive driving class. “The best safety device in the car isn’t the anti-lock brakes or stability control, it’s the educated and focused driver,” says Karen Polan, who heads the Toyota Driving Expectations program. “Because kids can forget, we need the parents there to remind their kids what they learned and to keep up the concentration while behind the wheel. The program works when parents are involved. We’ve learned that over these 10 years of holding these classes.”

Do You Know How to Check Tire Pressure?

In addition to the behind-the-wheel segment of the class, Toyota’s instructors teach parents and teens the whys and hows of checking oil, brake and steering fluids, tire pressure and tire tread. They even learn how to change a spare tire…because unlike some makes, Toyotas still come with a dedicated spare tire (an excellent feature!)

Classes are held in cities around the country and on weekends. Toyota’s Polan says about 600 parents and teens attend each program over a weekend – but students are taught in small groups for more individualized instruction. This coming weekend, May 18 and 19, the Toyota program will visit the Denver, Co. area. On June 8 and 9, instructors will be in San Antonio, Tx. For a complete schedule of classes and to sign up, visit ToyotaDrivingExpectations.com.

If you can’t make it to one of the Toyota Driving Expectations hands-on program, check the Toyota website for an online program, and to see if instructors may be visiting your child’s high school to give tips.