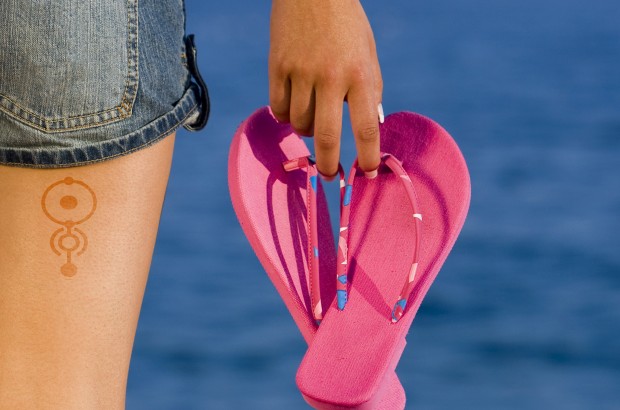 It starts like any other day. You have your coffee, shower, then go to apply your usual I-hope-this-can-lessen-the-appearance-of cellulite-cream to your posterior. What the #@*&%?!

You check out your caboose in the bathroom mirror, and there it is–a strange, perfectly circular rusty brown reticulated patch on the back of your thigh. What the heck? You check the other thigh, and there it is again. Round, dark, and definitely wasn’t there last month.

Depending on your temperament and TV watching habits, your reaction may be similar to one of these:

1. You panic, assuming this is a sign of your impending untimely demise. You rush to the ER, while begging your friends to scan through all their recorded episodes of “House”. Wasn’t there an episode where the woman was dying of a rare case of divariumreticulitus, and whose life was saved just in the nick of time by a brilliant diagnosis when the ridiculously handsome doctor noticed circles on the back of the patient’s thighs?

2. Your mother’s voice comes back to haunt you, warning of the dire consequences of using public toilets, petting stray cats, swimming in lake water, or sitting on the bench in that inexpensive but awesome spa where you are required to go naked. You brace yourself for the inevitable “I told you so.”

3. You realize the markings look suspiciously like those perfect crop circles left by aliens in a corn field, discovered by Mulder and Scully. You text your family an ominous warning, “The invasion has begun. And the aliens have chosen my ample backside as a landing pad”. (Thanks a lot, Ben and Jerry!) You then retrieve an old baby monitor and wait for the arrival, like they did in that scary Mel Gibson movie.

As it turns out, the truth may be not “out there” but “in there”. As in, in your heated car seat. Remember all those cold mornings when you happily parked your freezing cold rear end in that toasty warm heated car seat? Turns out those heaters could do more than just warm your butt. They’ve also caused at least two reported cases of erythema ab igne, also known as “toasted skin syndrome”.

A report in the Archives of Dermatology describe two separate cases where women developed the circular patches of reddish-brown on their thighs after prolonged contact with a heated seat. In one case, a woman drove an hour a day for four months using a seat heater, and in another the woman had taken around ten trips lasting two hours each.

Does This Seat Warmer Make My Butt Look Burnt?

According to dermatologists, the condition is caused by exposure to heat but is not a burn. There have been few cases of people being scorched by malfunctioning car seats, but that is not the case with with the patients in these reports. There was nothing wrong with the seat warmers. Toasted skin is the result of long exposure, but not necessarily high heat.

“Sometimes people don’t initially make the connection between the rash and the exposure, but based on the pattern you can figure out that it’s probably from heat,” said Jennifer Stein, a professor of dermatology at New York University Langone Medical Center. Stein said toasted skin is interesting because it reflects changes in technology over time. In recent years, she’s seen cases arising from people using space heaters under desks or resting laptop PCs on their legs.

The treatment is simple–just avoid contact with the heat source. You can warm up the seat just to take off the chill before getting in the car, or just turn the setting down. The toasted skin will eventually fade, but it may take a few months.

So go ahead. Hit the spa, take a swim in the lake, pet a friendly neighborhood cat, and enjoy the all-day TV medical drama marathon. But do beware the seat heater. An alien invasion may not be imminent, but swimsuit and shorts season most definitely is.