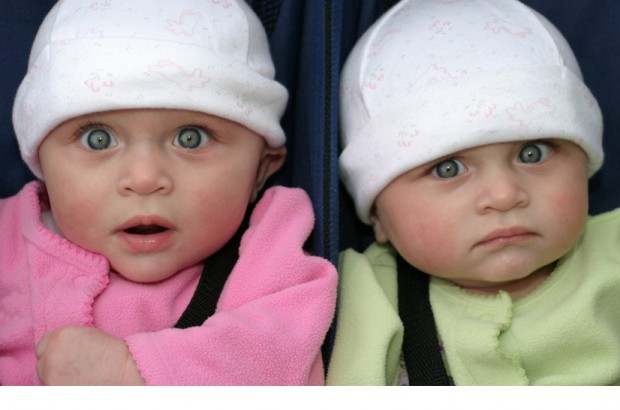 When families grow and need cars for twins, triplets, or just a whole bunch of kids, a day out with the family becomes a major logistic hurdle. While a parent of one can stuff a couple of diapers in her purse and zoom off, you have to strap multiple babies into multiple car seats, pack up a palette-full of baby gear, and wrestle with a stroller so big it ought to have its own engine. If anyone needs the right car for the job, it’s you.

The most obvious choice for parents with lots of kids is a minivan — the box-on-wheels concept is as family-friendly as it gets. Problem is, minivans are about as sexy as flesh-tone granny-panties. Super-size SUVs are a slightly more hip alternative, but they’re expensive to fuel, a pain to park, and lifting multiple children into their mile-high seats can get real old, real fast. So what are the best cars for twins?

We’ve endeavored to find a list of cars that are well suited to lots of babies — cars that are big on the inside but reasonably sized on the outside, with strong safety scores, reasonable running costs, and an acceptable cool factor. Here are our suggestions:

There was a time when wagons were the mommymobiles of choice — but the days of those faux-wood-grain-sided land yachts is long gone. The Acura TSX is a thoroughly modern wagon that is smoothly styled, easy to park, and quite sporty to drive. And it’s one of the best cars for twins. The back seat will accommodate three narrow child seats with seat-back tethers, though there are only two sets of LATCH anchors in the seat cushions. But the cargo area has plenty of room for a multi-kid stroller and a couple of Costco-sized boxes of Pampers, and the Insurance Institute of Highway Safety rates the TSX Sport Wagon as a Top Safety Pick.
Read the VroomGirls Acura TSX Sport Wagon review

The last thing any parent wants is to get stuck in bad weather with the babies — a nightmare that drives many parents to buy big, ungainly SUVs. The Audi Allroad is the sensible-sized solution: A small, svelte wagon designed to tackle the worst Mother Nature can throw into your path. Beneath the Allroad’s chunky good looks is a sophisticated all-wheel-drive system designed to conquer snow and rain, plus extra ground clearance to tip-toe over fallen trees and debris. The downside is that the Allroad one of the cars for twins rather than triplets; its back seat is a squeeze for three, and it doesn’t offer as much cargo space for strollers as other cars on this list. But it is a sexy and stylish way to get where you’re going, no matter how bad the weather.
Read the VroomGirls Audi Allroad review

The Chevrolet Traverse was designed to offer the interior room of a queen-size SUV like the Chevrolet Tahoe or Ford Expedition, but without the heavy, bulky exterior. Mission accomplished: The Traverse offers three roomy rows with big, squared-off back doors that give you plenty of room to maneuver babies into car seats. The Traverse offers more cargo space behind the third row than many two-row utility vehicles, although for a really big stroller you’ll need to fold down half of the rear seat down — but that still leaves room for you, your sweetie, and four kidlets. Our one major complaint about the Traverse is the anonymous styling, but you’ll find the same functionality with a more expressive design in two closely-related General Motors vehicles, the Buick Enclave and the GMC Acadia.
Read the VroomGirls Chevrolet Traverse review

There was a time when every American car could fit a twin stroller into its trunk, along with a baby bag, a box of diapers, a couple of giraffes, a sofa, a Rottweiler, and the entire cast of the Big Bang Theory. The days of cars as long as a city block may be gone, but the Ford Taurus bravely carries on the big trunk tradition with a massive 20 cubic feet of storage space. Getting three car seats into the back is a bit of a challenge, but twins will fit with room to spare. The Taurus was designed for buyers of the male persuasion, which explains a few of its eccentricities (like the he-man muscular shape and correspondingly narrow windows), but it also has a lot of sensible features, like voice-activated stereo and navigation and a Top Safety Pick rating from the Insurance Institute for Highway Safety.
Read the VroomGirls Ford Taurus review

There’s something a bit magical about the Honda Pilot. It offers most of the advantages of a giant-size SUV, including seating for up eight, a commanding view of the road, and all-weather all-wheel-drive. But when it comes time to park it — or to fill up the gas tank — you’ll appreciate the Pilot’s slightly-smaller size. Thanks to the engineering smarties at Honda, the Pilot offers almost as much interior space as a big SUV like a Chevrolet Tahoe, but in a smaller, lighter package that’s easier to drive and uses less fuel. And with provisions for up to five child seats, including three sets of LATCH seat-bottom anchors in the second-row seat and one in the third row, you and your partner can keep right on reproducing!
Read the VroomGirls Honda Pilot review

Okay, okay — I said we were going to suggest alternatives to the minivan, and the Mazda5 is, technically, a minivan. But I think it should be considered an honorary non-van, because rather than being hulking and huge, it’s small and racy. Built on the bones of a compact car — if you take a tape measure to the outside, you’ll see that the Mazda5 isn’t much bigger than a Honda Civic — the Mazda5 has six seats instead of the usual seven or eight, though you’ll probably have to fold one of those down to fit your multi-baby stroller. But the sliding doors make it easy to load up the kids in a crowded parking lot, and the one-box design gives a sense of family togetherness that you don’t get in an SUV or a crossover.
Read the VroomGirls Mazda5 review

Many parents think small-car ownership ends when the doctor says “Congratulations, now you’re going to need one of those cars for twins!” but the Scion xB proves that ain’t necessarily so. The boxy xB is big enough to accommodate three car seats in the back, yet slim enough to fit into compact parking spaces with ease. And with some creative packing, a compact twin stroller should fit neatly into the 21 cubic foot cargo bay. The xB is styled to turn heads, and Scion dealers have about a billion different accessories that allow you to customize the car inside and out. A low price, decent fuel economy, and super-reliable Toyota mechanical bits mean the xB costs a lot less money to own and drive than most family vehicles.
Read the VroomGirls Scion xB review

Everything you need to know about the Highlander can be summed up in the phrase “The seven-seat crossover from Toyota.” “Seven seat” means — well, exactly what it says. You’ll need to fold down the rear two seats to make room for your stroller and baby gear, but the second row will accommodate two child seats using LATCH anchors or three with across with seat belts and top tethers. “Crossover” means you get the tall driving position of an SUV and optional all-wheel-drive for bad weather, but with the lighter construction of a car — and that translates to better fuel economy and easier parking. “From Toyota” means you can count on the Highlander for years of reliable, trouble-free service.
Read the VroomGirls Toyota Highlander review

Who says big families can’t go green? The Prius V is the family-friendly version of Toyota’s famous Prius,. Compared to its ubiquitous sister, the Prius V sports a bigger, boxier body that trades a few MPG for a few much-needed cubic feet of passenger and cargo space. The Prius V’s back seat will accommodate three narrow-profile car seats, with more headroom for easier loading and enough cargo room behind the seats for bulky strollers and assorted baby gear. Fully loaded with kids and accoutrements, the Prius V will still go twice as far as a typical SUV or crossover on a gallon of gas — figure 40 to 45 MPG or better.
Read the VroomGirls Toyota Prius V review

Picking Volvo for this list was easy — the hard part was deciding which Volvo to put on the list, as they are all safe and family-friendly. I picked the XC90 because of its rather ingenious seating setup, which features LATCH anchor points in the second-row outer positions and an optional built-in booster for toddlers in the center. (90% of car seats are installed incorrectly; with a built-in booster seat, that can’t happen.) More kids? No problem, because the XC90 has more seats — two in back, though they lack LATCH points and using them eats up most of your stroller space. For older kids, consider the XC70, which can be had with a pair of built-in booster seats.